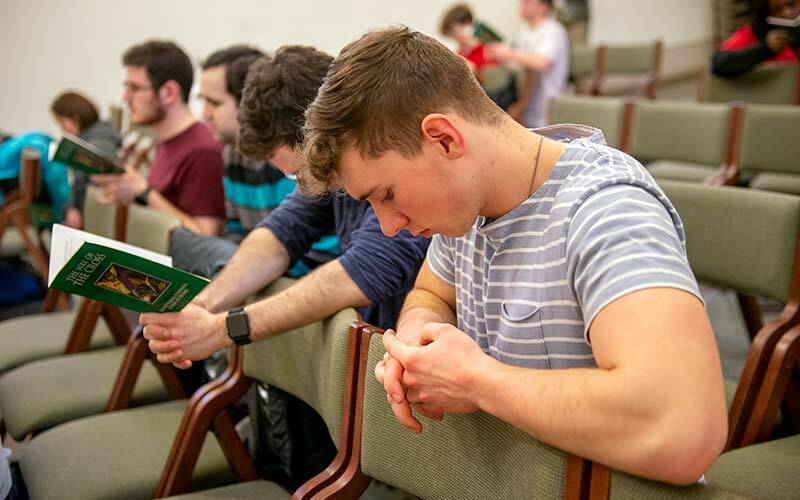 Jacob Chovanec, a student at Cornell University in Ithaca, takes part in a March 6, 2020, Stations of the Cross in the chapel of Anabel Taylor Hall. Members of Cornell Catholic Community recently talked about how they practice their faith on campus. (Courier file photo)

Countless distractions, both academic and social, swirl around newly arrived college students, away from their parents for the first time. Will they feel the need and make the time to continue practicing the Catholic faith of their youth?

The answer has been an emphatic “yes” for John Coffey. If anything, the Long Island native said, his faith has grown stronger at Cornell University where he recently ended his junior year.

After attending Mass his first Sunday on campus, he was eager to engage with other students who were serious about the faith and in deepening their spirituality, Coffey recalled.

“I felt like there was something more, a depth I had not explored yet. God has blessed me through that,” he said, noting that he became so active in the Cornell Catholic Community that he now serves as its president.

Choice is ‘up to you’

Coffey was one of four members of that community who participated in an April 24 discussion on the Zoom video-conferencing platform. Sharing their experiences with youth-ministry and confirmation-program members in the Tompkins County parishes of Holy Cross, Dryden; St. Anthony, Groton; and All Saints, Lansing, the students reflected on how going off to college has affected their faith. The event was coordinated by Sheri and Jon Minarski, the cluster’s youth ministers.

Participant Elizabeth Fitzgerald, a junior from Cortland, observed that parents can influence church attendance during childhood and adolescence, but “it really is up to you after you leave (home).”

Chris Bakhos, a junior from New Jersey, said he has committed himself to growing in the faith since beginning at Cornell “and there’s definitely much more to go.” Like Fitzgerald, he said his decision has been very deliberate, as opposed to attending Mass out of habit when he was younger.

“Maybe it’s the whole going off on your own and choosing it for yourself,” he remarked.

Fitzgerald noted that when she began college her faith “wasn’t super-deep, as genuine as it is now.” The opportunity to openly discuss her beliefs with like-minded young people has helped create that depth, she said.

“I discovered fellowship,” she said. “Up until that point, my relationship with God had been all on my own, and I didn’t know what it was like to experience it with other people. It was like, ‘Wow there’s more than one of me, people who are strong in their faith.’”

In the same way, “That feeling of belonging has driven me to work harder on my faith,” said Sami Peter, a sophomore from southern California.

But practicing the faith in college isn’t always easy, even when the desire is there. Although Cornell Catholic Community is large and easily accessible, some colleges don’t offer Mass on campus or even a Catholic campus ministry. For students in such situations, Coffey suggested carpooling with peers to Mass at the nearest Catholic church and/or starting discussion groups with fellow Catholics and people of other denominations.

“What’s important to you, what’s worth spending your time on?” Coffey asked rhetorically.

“If I choose to sit down and do my work (and not waste time),” Bakhos said, “then there’s time for me to do my work and do my faith.”

Acknowledging that she attends a highly challenging Ivy League institution, Fitzgerald said, “I think most people are generally very busy.” But no matter how busy she becomes, she said she always makes sure that she at least gets to Sunday Mass.

“That’s one hour you get just for God. It’s really nice to have the one hour, where none of that (list of other obligations) matters anymore,” she said.

“Mass is the pinnacle moment of our faith. It’s the only time I can consistently find that I don’t have to worry about anything else,” Coffey agreed.

Peter likewise said she finds her time at Mass to be a comfort rather than a burden, regardless of how busy she is.

“Every time I go to Mass, I feel better than how I did going in,” she said. “It kind of grounds me, brings me back to reality. I’ll be freaking out about all these assignments I have to do, then I go to Mass — and, you know, that’s what really matters.”