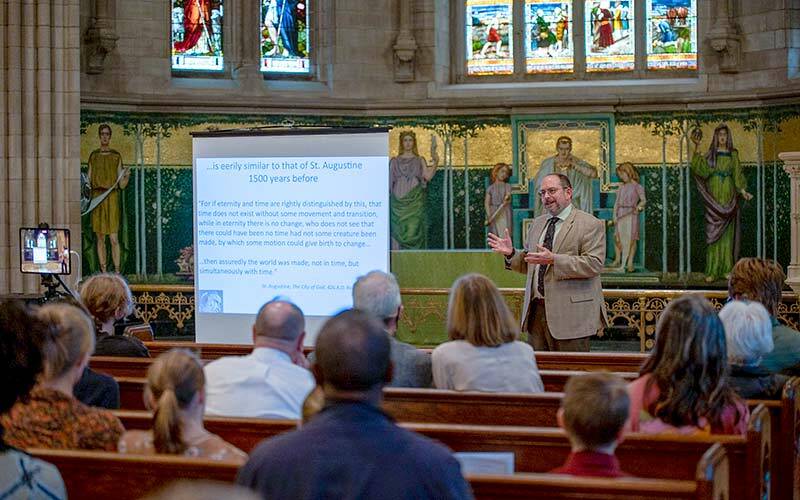 ITHACA — As an Ivy League school with a strong Catholic campus ministry, Cornell University is an ideal setting for deepening connections between intellect and Catholicism.

That’s what Elizabeth Lyon Hall has affirmed in her role as executive director of the COLLIS Institute for Catholic Thought and Culture, which launched this past fall at Cornell. The initiative is geared toward Cornell’s students, faculty and staff — and, eventually, the wider public as well — through offerings of seminars, courses and music.

“There’s so much energy and so much talent. These are Catholics from very different backgrounds. They come together and have very meaningful conversations,” Hall remarked about COLLIS’ first few months of activity.

COLLIS Institute was established through a grant from the John Templeton Foundation. The initiative is part of the newly established In Lumine Network, which supports Catholic intellectual tradition on campuses as it relates to dialogue on theology, philosophy, and the natural and social sciences. The other network members are the University of Chicago, University of Southern California, University of Virginia, University of Pennsylvania and Harvard University.

Hall noted that the word collis is Latin for “hill,” reflecting both Cornell’s hilltop location overlooking Ithaca and scriptural mentions of hills and mountains. COLLIS’ inaugural lecture and ceremony took place Nov. 5, 2022, at Cornell’s Sage Chapel and included a visit and blessing of the new organization by Bishop Salvatore R. Matano.

“It was very meaningful to Catholic students to have the bishop present on their campus where they worship and study,” Hall said. “The bishop not only provided his blessing but assured us of his continued prayers for the students.”

Also that day, Jonathan Lunine, chair of Cornell’s Department of Astronomy, delivered a lecture about the views of Father Georges Lemaître, a Catholic priest who first advanced the big bang theory in the late 1920s.

Lunine serves as chair of COLLIS Institute’s board of directors. Completing the board — which Hall describes as “world-renowned” — are other Cornell professors as well as Stephen J. Loughlin, president of St. Bernard’s School of Theology and Ministry in Pittsford.

Additional activities have been offered during COLLIS’ first few months. They include:

Hall noted that Mudd’s lecture is an example of COLLIS Institute’s focus on the three-year National Eucharistic Revival that began in June 2022. In addition, she said, the institute is striving to create more opportunities for eucharistic adoration.

As COLLIS Institute continues to develop, Hall said she’s aiming for programming to include Catholics of all ages and spread across religious boundaries as well.

“We hope to extend more into the general Ithaca area,” she said. “We would love to be able to reach out to the community and eventually offer Catholic intellectual, cultural and artistic traditions that would be accessible to families.”