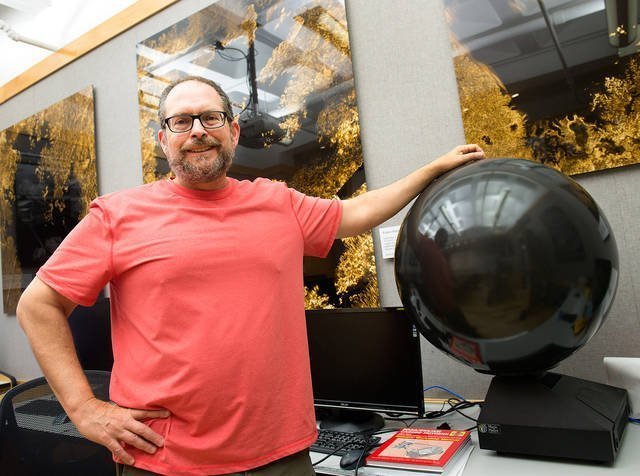 Jonathan Lunine, Cornell University’s director of the Center for Astrophysics and Planetary Science, poses in a classroom at the university Aug. 18. Lunine, a parishioner of St. Catherine of Siena Church in Ithaca, supports a link between faith and science. Courier photo by John Haeger 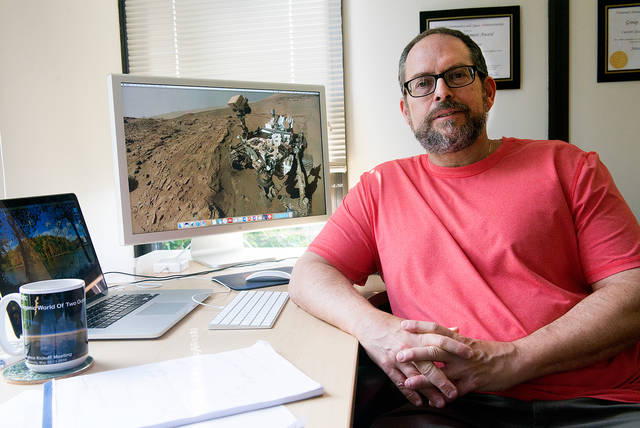 Jonathan Lunine, Cornell University’s director of the Center for Astrophysics and Planetary Science, poses in a classroom at the university Aug. 18. Lunine, a parishioner of St. Catherine of Siena Church in Ithaca, supports a link between faith and science. Courier photo by John Haeger

ITHACA — Approximately three years ago, after giving a lecture at St. Catherine of Siena Church detailing his belief in the compatibility of science and religion, Jonathan Lunine was approached by a teenaged girl.

“She said she was glad to hear this talk, because her boyfriend had told her she couldn’t be a scientist someday if she believed in God,” he recalled. “Imagine hearing that as a high-school student.”

Lunine, a parishioner at St. Catherine of Siena, is a prominent scientist and physicist, serving as Cornell University’s director of the Center for Astrophysics and Planetary Science. And he is far from alone among his colleagues in supporting the link between faith and science. Lunine noted that the Society of Catholic Scientists (https://www.catholicscientists.org) — an organization he cofounded in 2016 and for which he serves as vice president — has already attracted more than 500 members.

“I think this satisfies a long-standing need for some way for Catholic scientists to demonstrate how to live their faith and profession at the same time,” Lunine said of the society, which held its first conference in April 2017 in Chicago. “We do it every day, but there wasn’t a way for people to kind of get together and reflect on what we’re doing.”

At the conference, Lunine and other participants addressed the theme of “Origins.” They discussed the beginnings of consciousness, the cosmos, human language and living things, delving into such topics as the beginning and future of the universe, habitable planets and the evolution of species.

A key thrust for the Society of Catholic Scientists, Lunine said, is spreading the word — particularly among young people interested in pursuing careers in science — that one need not choose between faith and science. Indeed, the Catechism of the Catholic Church, No. 159, notes that “the things of the world and the things of faith derive from the same God.”

“People are surprised that you could be a scientist and be Catholic. Just that people are surprised means we have a need for this (society),” Lunine said, adding that in this day and age “we’re running into this very polemical argument about science and religion.”

This tension is nothing new. On July 19, Lunine gave a lecture at Cornell about Father Georges LeMaitre, a Belgian mathematician and physicist who first advanced the Big Bang theory in the late 1920s, proposing that all matter in the universe can be traced to a single point of origin from which with the universe continually has expanded ever since. Although the Big Bang remains the prevailing model of the universe’s origin, Lunine noted that Father LeMaitre struggled to defend his theory because he was a priest; detractors claimed his findings were religiously motivated.

Asked how his Catholic faith meshes with his profession, Lunine said there are mysteries about life, nature and existence that science will never be able to fully explain — and he puts those mysteries into the hands of God.

“There’s a big difference between determining the structure of universe and how it evolved in time, vs. why is there existence, why is there anything. That’s a question that some scientists confuse,” remarked Lunine, 58, a New York City native who did his undergraduate studies at the University of Rochester.

Speaking of contrasts between scientific evidence and Biblical accounts of creation, he stressed that the Book of Genesis isn’t designed to be taken literally.

“(Genesis is) not a science textbook. It’s part of a history of salvation,” he stated.

The Cornell professor said his views on the coexistence of science and religion have long been influenced by his interactions with colleagues from the Vatican Observatory. That scientific research institute is based near Rome and sponsored by the Holy See, which has supported astronomical research for several centuries. The observatory also operates a telescope near the University of Arizona, where Lunine taught from 1986-2010 before moving to Cornell. (Brother Guy Consolmagno, SJ, current director of the Vatican Observatory, will deliver the annual Catholic Courier Lecture on Oct. 5.)

Lunine, who was raised Jewish, said he had long been intrigued by the Catholic faith before entering the Rite of Christian Initiation of Adults. He was welcomed into the Catholic Church in 2007.

“I realized I needed to make a decision and move, rather than kind of have a one-man, 30-year symposium going on in my head,” Lunine said with a laugh.