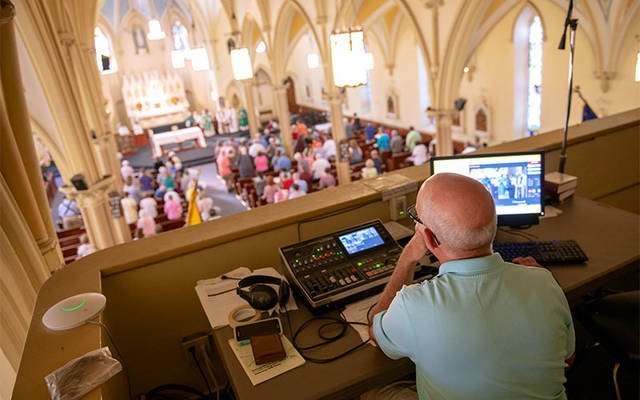 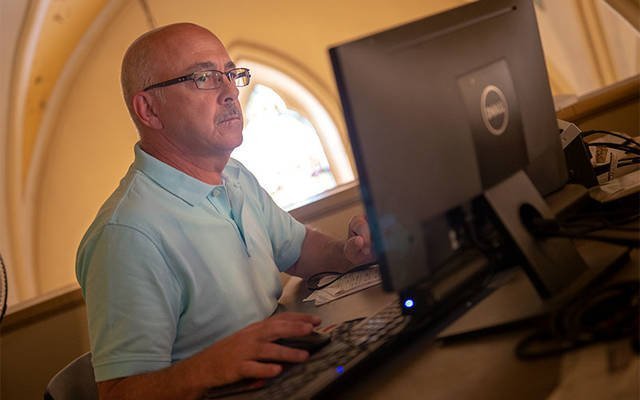 CORNING — Thirty minutes before a Saturday Mass this past summer, Mike Paulin was already hard at work in the choir loft as worshipers began drifting into the pews below.

At Paulin’s fingertips was an array of computer controls that he continued to tinker with throughout the liturgy. His goal: to ensure a high-quality presentation of Mass for television viewers across the Southern Tier, many of whom are physically unable to attend church.

Paulin serves as the team leader for production of a weekly TV liturgy that has a decades-long history at All Saints Parish. In addition to many parts of Steuben County, where the parish is located, the Mass can be viewed in Chemung and Schuyler counties as well as Tioga County in Pennsylvania.

“Because of that coverage, we’re serving not only our parishioners but our shut-in brother and sisters (in other regions),” said Steve Putman, All Saints’ communications director, noting how valuable the Masses are to residents of nursing facilities and people who are homebound, as well as their caretakers.

“It may be their only opportunity to attend, if you will, the celebration of the Eucharist,” Putman added.

Volunteer crew members record each 5 p.m. Saturday liturgy at St. Mary onto a DVD, which is then brought to the TV station for airing. The finished product remains available for viewing each Sunday following some recent scheduling changes: since Aug. 19, the Mass has begun airing at 11 a.m. on its new home channel of WETM 18.2. That channel also can be accessed on Spectrum Channel 11, Empire Access Channel 97 and Blue Ridge Cable Channel 8. Previously, the Mass was carried for more than 15 years on Big Fox WYDC and its sister station, WJPK, on Sundays at 10 a.m. and 8 a.m., respectively.

According to Putman, All Saints Parish pays a fee to WETM. Up to two paid memorial intentions can be made to the parish for each TV Mass; in fact, an intention for Sept. 23 honored Father Thomas Brennan, pastor of St. Mary Church from 1953-75 who continued residing there until his death in 1996.

Paulin said he first became involved with the productions about 20 years ago — “when my son was an altar boy” — and that the history of the TV Mass in Corning extends back several years before that. He noted that prior to St. Mary becoming the home base, Masses were recorded at the former St. Patrick Church and later St. Vincent de Paul Church, both in Corning, with volunteers utilizing hand-held camcorders.

These days, the operation has become markedly more sophisticated, with computer equipment in the choir loft controlling three remote cameras mounted around St. Mary Church. Paulin and other technicians strive to maximize the effectiveness of those cameras so as to convey the flavor of each Mass to viewers; for example, “If a choir is playing, how can I incorporate them?” he said.

Generally, congregations aren’t aware that the Masses are being recorded — although Paulin said that changes a bit at holiday time, when worshipers from overflow congregations sit in the choir loft and some become intrigued by the TV production’s operation.

“They’re watching me instead of watching the Mass,” Paulin said with a laugh.

Paulin acknowledged that an occasional technical glitch surfaces, yet overall he’s proud of the production quality his crew is able to achieve. He added that feedback from viewers is consistently positive.

Paulin and his wife, Eileen, are part of a rotating production squad along with Mark Saia and Mary Backus. He said he’s hoping to gain additional volunteers, of high-school age and older, who are adept with recording technology so the team can have more scheduling flexibility.

Adding new members also would enhance the parish’s goal of soon reaching an even wider viewing audience, through the live-streaming of St. Mary’s Sunday 11:30 a.m. Mass. Each of those liturgies would be streamed on the parish website, www.allsaintsparish.org, as the Mass is taking place, and also be available for replay at any point afterward.