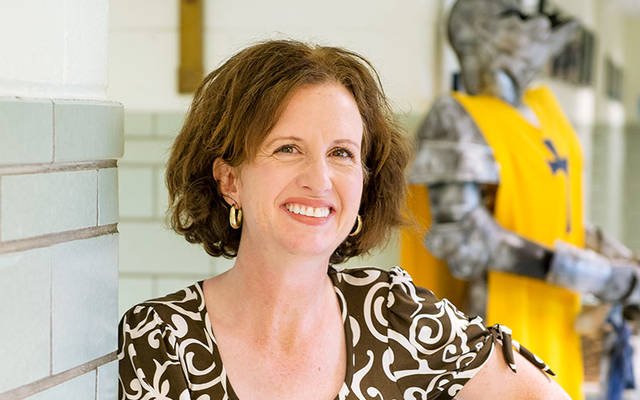 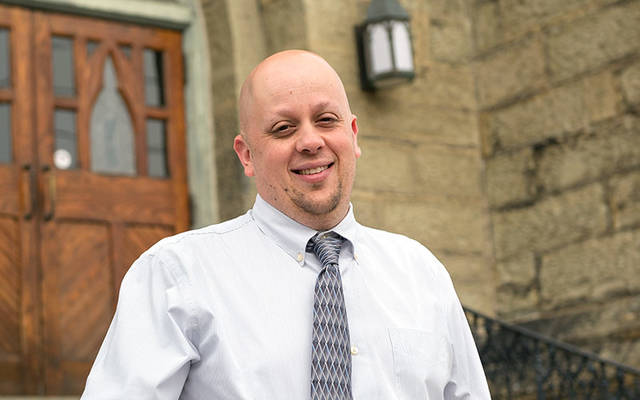 Thomas J. “T.J.” Verzillo is the new principal at All Saints Academy in Corning.

Deborah Franklin and Thomas J. “T.J.” Verzillo are first-timers not only as Catholic-school principals, but also as Southern Tier residents.

Franklin began July 5 as principal of Elmira Notre Dame High School after having grown up and built her career in Texas. And Verzillo, a longtime educator in his native Rochester, started July 10 leading All Saints Academy in Corning.

At Notre Dame, Franklin serves as principal for the lone Catholic high school in this diocese outside of Rochester. She comes from Lake Dallas Middle School, approximately 30 miles north of Dallas, where over the previous nine years she was assistant principal for a student body of 900-plus. Comparatively, Franklin said that approximately 330 students in grades 7 through 12 are enrolled at Notre Dame for the new school year.

“It’s a private school and smaller than what I’m accustomed to, but the benefit is being much more close-knit. And I like the fact that we can combine prayer and school, which can be difficult to do in today’s society,” she said.

Franklin worked in business and marketing for a number of years after college, but said she redirected her career after several people told her she’d make a good teacher. Her own schooling, along with her teaching and administrative experience, all took place in public schools — yet she describes herself as “a cradle Catholic,” so coming to Notre Dame was a fairly natural transition.

“That was another appeal for this position — something that would combine my religious upbringing and my love of education,” she said.

In an article for the July edition of the school newsletter, the Crusader Connection, Franklin noted that she paid a quiet visit to Notre Dame on the morning of July 4, one day before her official start date as principal. She wrote that she “was pleased to find my office just steps away from the chapel,” adding that she proceeded to stop in the chapel to pray for strength and guidance in her new role.

She told the Catholic Courier that she’s excited to be part of a strong tradition at Notre Dame, which opened its doors in 1955. The coeducational institution added a seventh- and eighth-grade curriculum in 2012.

“I didn’t realize until I moved here how significant the school is to this community. The support we’ve had from our community and alumni is absolutely amazing,” Franklin said. “I feel truly honored and blessed to be a part of this. Everyone has been very welcoming.”

Despite having to travel some 1,500 miles northeast in her move to Chemung County, Franklin said she had already developed a fondness for upstate New York thanks to vacations she took with her husband during past summers in the Finger Lakes area “to beat the Texas heat.”

Verzillo, meanwhile, has relocated to the Southern Tier as well, albeit from a much shorter distance away. As principal of All Saints Academy, he brings a wealth of Catholic-school experience as both a student and teacher in the Rochester area.

He attended the former St. Thomas the Apostle School in Irondequoit and went on to Aquinas Institute, from which he graduated in 1994. He taught at two former Catholic schools in the City of Rochester: St. Monica from 2000-08; and Cathedral School at Holy Rosary from 2008-09. Verzillo then logged six years as operations and education director for the Volunteers of America Children’s Center, also in Rochester. In that role, he oversaw the Universal Pre-Kindergarten and Head Start programs for approximately 300 children while supervising a teaching staff of 60 members.

Despite the closing of numerous Catholic schools in Monroe County over the past decade — including the two at which he taught — Verzillo had remained hopeful that he could someday become a Catholic-school administrator. That opportunity came up when All Saints Academy’s previous principal, James Tauzel, left earlier this year to become coordinator of curriculum and instruction for the diocesan Department of Catholic Schools.

Verzillo acknowledged that he hadn’t envisioned relocating to the Southern Tier, saying, “I had never even heard of All Saints.” But he said he’s settling in quickly at the Corning school; like Franklin at Notre Dame, Verzillo is grateful for the level of support he’s received from the All Saints community.

“I’ve had many parish members say, ‘If you need anything, let me know.’ They’ve been very welcoming,” he said. “They’ve been like any other Catholic-school setting I’ve been in — they put everyone else first, they don’t put themselves first.”

Verzillo takes over the lone Catholic school in Steuben County, which he says has an enrollment of approximately 125 for the new school year. It is among only a handful in this diocese that maintains grades pre-K through 8.

He said he’d like to enhance that sense of togetherness even more among the school and the three churches in All Saints Parish: St. Mary, where the school is located; along with St. Vincent de Paul in Corning and Immaculate Heart of Mary in Painted Post.

“My goal is to build the school and parish community to work closer together, so that we’re more one entity,” he said.