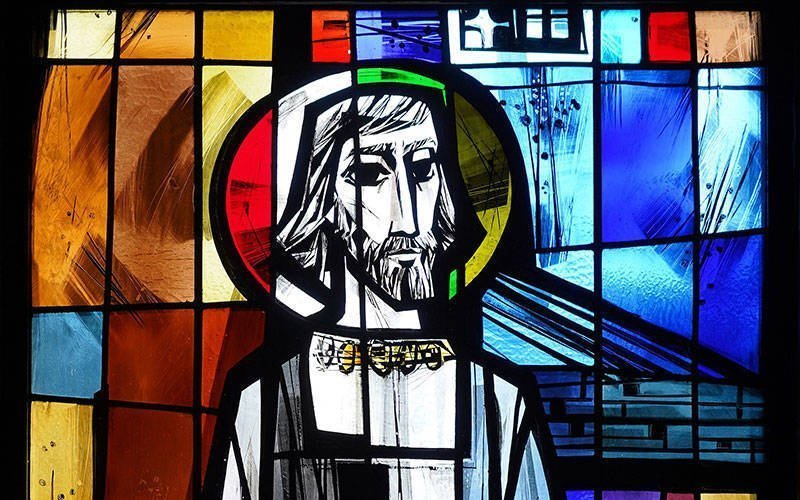 A depiction of St. Joseph holding a carpenter’s square is seen in a stained-glass window in the chapel of St. Joseph’s College in Patchogue, N.Y., in 2020. (CNS photo by Gregory A. Shemitz)

All Saints Parish in Corning recently honored the Year of St. Joseph by conducting a well-attended book study series.

Beginning in February, approximately 20 people took part in weekly Zoom meetings during which they discussed Father Donald H. Calloway’s 2020 book, Consecration to St. Joseph: The Wonders of Our Spiritual Father. The six-week initiative was capped off on March 19 — the Solemnity of St. Joseph — with an in-person consecration and blessing for participants that was conducted by Father Matthew Jones, pastor of All Saints, just before the end of daily Mass. Also taking part in the consecration and blessing were a men’s group that had joined in with its own study, as well as additional participants who had studied on their own.

One of the book study group members, Teresa Graham, noted that the initiative was such an inspiring experience that 75 copies of Father Calloway’s book have been made available for free to additional All Saints parishioners who can, if they wish, engage in a 33-day study leading up their own consecrations.

The effort at All Saints is among many activities throughout the Rochester Diocese to honor the Year of St. Joseph. This special year was announced by Pope Francis beginning Dec. 8, 2020, in honor of the 150th anniversary of St. Joseph being declared patron of the universal church. As part of these festivities, the pope has released an apostolic letter on St. Joseph, Patris Corde (“With a Father’s Heart”).