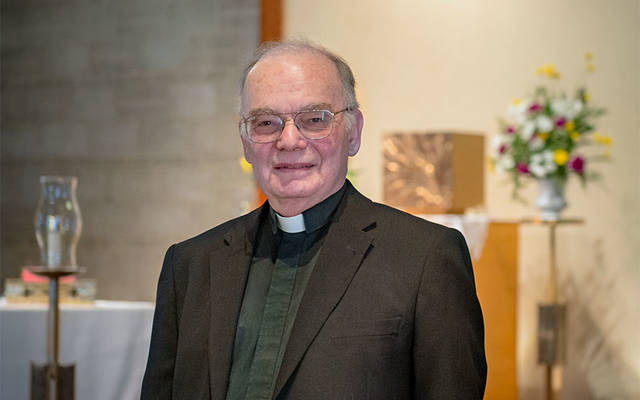 Father John Forni, who currently serves as parochial vicar at All Saints Parish in Corning, has been a priest of the Diocese of Rochester for more than four decades and will reach senior-priest status this June.

“It has been a joy to serve the people of God in this diocese for 41 years. It’s been a joy ‚Ä¶ and I’ve learned as much as I’ve taught others,” Father Forni recently remarked.

The priesthood was not a vocation Father Forni seriously considered as a child, even though those close to him told him he would make a good priest.

“I can remember my grandmother way back when I was in elementary school saying, ‘Oh, you’re going to be a priest,’” he said.

At first Father Forni, who grew up in Great Barrington, Mass., brushed those comments aside. He earned a bachelor’s degree from Boston College, where he was impressed by the school’s Jesuit priests. He then earned a master’s degree from Cornell University, and while there he frequently visited Mount Savior Monastery in nearby Pine City. The Benedictine monks he encountered there reinforced his growing sense that he might be called to the priesthood.

After completing his studies at St. Bernard’s, Father Forni was ordained April 22, 1977, by Auxiliary Bishop Dennis W. Hickey at Holy Family Church in Rochester. He then served as administrator of St. Bridget in Rochester (1977-79) and priest intern at St. John of Rochester in Fairport (1980) before becoming associate pastor at Rochester’s Blessed Sacrament (1980-84).

Father Forni served as campus minister at Cornell Catholic Community from 1984-91. He then served brief stints as temporary administrator at St. John the Evangelist, Clyde; St. Patrick, Savannah; and Holy Apostles, Rochester, and in 1993 he took on his first pastorate, assuming the leadership of St. Mary Magdalene, Wolcott, as well as St. Thomas the Apostle, Red Creek, and St. Jude Chapel, Fair Haven.

He led those parishes until 2000, and during that time he also was a member of the Catholic Courier’s board of directors. In 2000 he became pastor at St. John the Evangelist in Greece, where he served until 2012, when he took on his current role in Corning.

All Saints will present a simple celebration in June when he achieves senior status.

After reaching that milestone, Father Forni plans to reside at Church of the Nativity of the Blessed Virgin Mary in Brockport and spend his winters in Florida.

Father Forni said he has been privileged to be a part of many significant moments — both joyful as well as sad — in the lives of his parishioners, and he has learned much from them.

“The faithful Catholic people of our parishes have a very deep sense of their faith and the way things ought to be, and if you just listen to them, you will learn how to administer your parish,” he said.