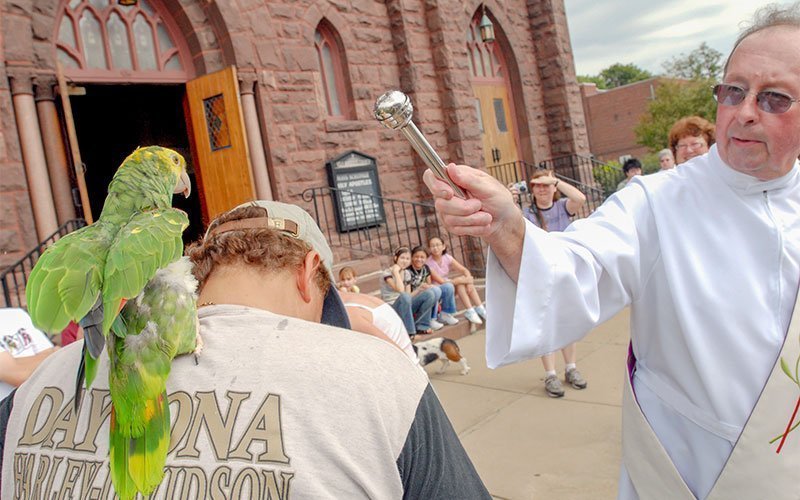 Whoever believes in the saying “you can never go home again” might think differently after learning of Father Philip Billotte’s plans.

In late January Father Billotte will move back to his first family house, in the hills of central Pennsylvania, to begin retirement after serving as a priest of the Diocese of Rochester for more than 41 years. “I got the old homestead. I’ll be living on a dirt road,” Father Billotte said. A retirement Mass and reception in Father Billotte’s honor was scheduled for Jan. 6 at St. Mary Church in Corning. He has served as sacramental minister for All Saints Parish — of which St. Mary in a part — since 2002. He will be succeeded at All Saints by Father Lewis Brown, a diocesan priest who retired last summer from his longtime military chaplaincy.

Father Billotte, who turned 68 this past June 17, said he had originally planned to retire at the time of his 70th birthday. But he suffered a mild heart attack this past August, and although he “came back in good shape,” he said he felt it best to retire now in order to protect his health. He noted that Bishop Matthew H. Clark “was very gracious” in honoring his request.

Although Father Billotte is returning to his original home town of Frenchville, Pa., the greater part of his childhood was actually spent in Corning, where his family moved when he was 3 or 4 years old so his father could take a job with the old New York Central Railroad. Father Billotte also has logged three priestly assignments in Corning totaling 16 years.

“People I went to school with are still here, people I grew up with. The people have just been great. They’re a part of my life,” he said.

In 1993 Father Billotte served as temporary administrator of St. Patrick, Owego. The following year he became pastor of the St. Januarius, Naples/St. Patrick, Prattsburgh, cluster. In 1999 that pastorate grew to six churches with the addition of St. Michael, Penn Yan; St. Andrew, Dundee; St. Theresa, Stanley; and St. Mary, Rushville. Father Billotte left that position in 2001 and returned the next year in his current role at All Saints.

Father Billotte acknowledged that he has always favored personalized ministry over administration, as evidenced by his 25-year involvement with the Family Camp summer program at Camp Koinonia in Yates County. More recently, he has been a spiritual assistant for the Secular Franciscan group at All Saints Parish.

“Father Phil’s presence in our fraternity has been a blessing. He’s helped us in many ways — saying special Masses, guiding our council, leading us when I was in Florida caring for my dad, helping at dinners for the needy, leading formation many times, and more,” said Gloria House, minister of the Secular Franciscans’ St. Pius X Fraternity. “He is an excellent envoy for Christ and his church. He’s the genuine article — he helps people all he can; there’s nothing phony about him.”

Father Billotte will remain active upon his return to Frenchville, noting he plans to assist at the nearby Bethany Retreat Center and St. Mary of the Assumption Church.

“My grandfather built the church there,” he said.

As for his rural family homestead, Father Billotte said that many parts of the house have been modernized and his five sisters and two brothers look forward to reunions there.

“They can’t wait to come down,” he remarked, adding that the retreat center has plenty of lodging if friends from the Rochester Diocese would like to come visit as well.

As he prepares to exit this diocese, Father Billotte said he feels satisfied with his many years of priestly ministry here.

“It’s fulfilled all the things I really thought a priesthood should be. There’s been difficulty, but I knew it would be there. Everybody’s been fantastic to me — from the bishop to all the people right on down the line,” he said. “It’s a fulfilling life. It’s what I chose, and I’m glad it’s what I chose.”