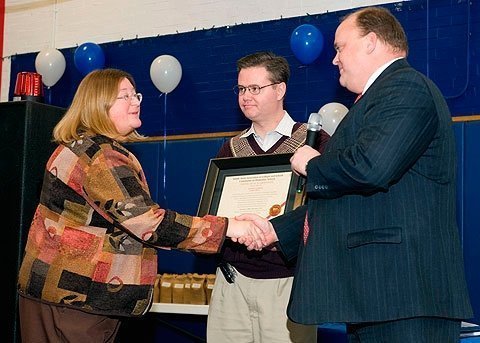 She’s devoted her whole career to Catholic-school education, and Rose Ann Ewanyk wouldn’t have had it any other way.

"I just felt I had a calling to work in a small Catholic atmosphere," she said. "I did look to move on, but I liked the intimacy, the smallness, the camaraderie between teachers. It’s the calling that you choose to do, and I’ve never regretted it."

Ewanyk retired in late June as principal of All Saints Academy in Corning after more than 35 years in Catholic education, including the past 13 in her principal’s position. She has been succeeded by Joe Tobia, who recently retired as principal of Corning-Painted Post East High School (a profile on him will appear in the September 2012 Catholic Courier.)

Ewanyk, a native of Elmira, spent most of her childhood in Catholic schools as well. She attended St. Patrick Elementary School and went on to Notre Dame High School for two years. She graduated from Horseheads High School following a family move; then she attended Corning Community College and SUNY Oswego where she earned a bachelor’s degree in 1974. She obtained a master’s degree in 1977 from Elmira College.

Ewanyk began teaching in 1976 at the former St. Mary School in Bath, spending 10 years as a prekindergarten and kindergarten teacher. Her sister, Christine, who now works in the Spencer-Van Etten School District, also taught at St. Mary during that time; Ewanyk noted with a laugh that when the siblings would tell people they were sisters, they were assumed to be women religious.

Following her time at St. Mary, Ewanyk was a substitute teacher for a brief time before serving at St. Vincent de Paul School in Corning as the early childhood program director and later at St. Patrick in Corning teaching prekindergarten through first grade.

In the late 1990s she became a principal for the first time, overseeing two buildings that had become known as All Saints Academy. She later shared principal duties with Marilyn Zinn, overseeing the St. Mary (State Street) building for grades 2 through 8 while Zinn headed the St. Patrick (Denison Parkway) facility for prekindergarten through first grade.

Ewanyk noted that her initial acceptance of a principal’s position meant a return to school for administrative studies. So she, Zinn and Diana Oravec — currently the principal at Immaculate Conception in Ithaca — journeyed many Fridays and Saturdays to Bath for their course work.

"Our professors would travel down from Brockport," said Ewanyk, who in 2001 received her certification of advanced study from SUNY Brockport.

When Zinn left in 2001 to become principal of St. Mary Our Mother School in Horseheads — a position she still holds — Ewanyk once again became principal of the entire All Saints operation. In 2003 the two buildings were consolidated at the State Street locale, and it remains to this day a prekindergarten through eighth-grade school.

Ewanyk observed that with such a wide range of grades in one building, she worked with many children for close to a decade. She said she maintains a special spot in her heart for the youngest grades, where all her teaching experience was logged.

"My love for the younger children was always there — their willingness to learn, everything you said they took as gold," she remarked, adding that as principal she made sure to stop in on the prekindergarten classes two or three times per day.

Ewanyk, 60, said she decided to retire at this time in part to care for her aunt and tend to projects around the Horseheads family home where she still lives.

"The last 10 years, my life has been my job," she said, adding that many other adults connected to All Saints are devoted as well: "I never could have done it without outstanding faculty and parents."

Ewanyk was honored June 15 at All Saints with a celebration involving students, staff and parents. "I asked for something very simple," she said, adding that the event included flowers, gifts and lots of hugs from the children.

She will be buoyed by many warm memories: "I can recall so many incidences, recalling students who are now married and having children, their interests and likes. We never forget our students, their faces, their haircut style."

Also guaranteed to bring Ewanyk many smiles is the knowledge that those little people have grown into fine young adults.

"It’s always rewarding to see the success, and know you’ve had a little part in that," she said.