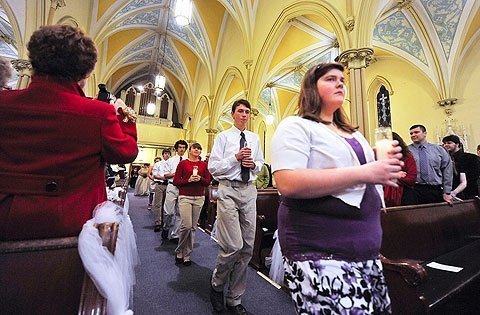 Of all the songs one might expect to hear at a Mass for teenagers, it’s doubtful "Here Comes the Bride" would get any votes.

Yet that’s exactly how the 6 p.m. liturgy began on Sunday, Dec. 18, at St. Mary Church in Corning. A rare and joyous blend was created when the nuptials of Elsie Knack and Markos Frangakis took place during the monthly Life Teen Mass for the IGNITE youth group of All Saints Parish.

According to Cory Smith, All Saints’ youth minister, the bride and groom have lived in the Rochester area and were returning to her native parish for the wedding. The idea to mesh their special day with a catechetical experience for teens evolved from conversations between the young-adult couple; Father Lewis Brown, celebrant; and Trish LaFortune, All Saints’ pastoral associate.

The evening Mass began with numerous teens carrying candles during the opening procession as "Here Comes the Bride" was played; that was followed by "O Come O Come Emmanuel" to signify the Advent season. Just before the wedding vows, IGNITE members Aidan Collins and Sam Prestigiacomo recited a special dialogue for the congregation that had been devised by Father Brown.

Aidan voiced several facets of Catholic marriage, based on the promises that were about to be exchanged: complete commitment to one partner for life; accepting children and raising them according to the law of Christ and his church. Sam countered all of these points by repeating "but society doesn’t care," noting from his script that society favors disposable marriage that does not require maturity or lasting fidelity; that having children and attending church are options rather than responsibilities.

Aidan and Sam said later that voicing the dialogue helped them gain new insight into what marriage is really all about.

"It gave me the knowledge that it’s not just the ceremony, but the faith and what you’re going to do with the marriage," said Sam, 15.

"I was able to see the good parts of the Catholic marriage. You could see the differences with marriage in society," said Aidan, 15, remarking that, for instance, many movie and television celebrities "don’t value it as much as we do. Some sort of take it for granted."

"In a world where society deems it to be correct and conventional, to divorce and commit adultery, it was amazing to see the love represented in the sacrament of marriage within the church," added Nicole O’Connell, 17, who was an altar server that evening. "It is important to see that not everyone has to be a statistic and the love one feels for his or her spouse on that special day must be rekindled and treasured."

During the exchanging of vows, Father Brown had the bride and groom face the congregation. Nicole said this part of the Mass was especially touching.

"It was truly amazing as a young adult to see the love of God upon the couple as they lit the unity candle," she said.

"They looked to me like they really belonged together," Sam added.

After Communion, youth-group members presented the new Mr. and Mrs. Frangakis with a special gift for allowing them to be part of their nuptials. One by one, teens brought pieces of a Nativity set forward.

"It was lovely to see the tears of joy that the couple expressed," Nicole remarked.

Life Teen is held the third Sunday of each month at All Saints. Smith noted that attendance was slightly larger than usual on Dec. 18 due to the wedding, saying that "we even had some families that don’t normally attend, just to see what this was all about."

Smith added the gesture by the couple to let Life Teen participants be part of their wedding was a selfless act that countered the notion of, as he put it, "This is my day and it’s all about me."

Sam, Aidan and Nicole all said they felt humbled and fortunate to have been a part of a Mass with such a special dimension attached.

"I thought it was very unique and pretty amazing to watch," Aidan said.

"I have been an altar server for seven years, but this has been by far the most inspirational Mass I have ever participated in," Nicole stated.

When asked if he thought he might want his own wedding to take a similar route, Aidan acknowledged that "it would be kind of a cool experience." Then, displaying the kind of thoughtfulness that will come in handy whenever he does tie the knot in the future, he added, "I guess it would be an option depending on what my significant other would think."