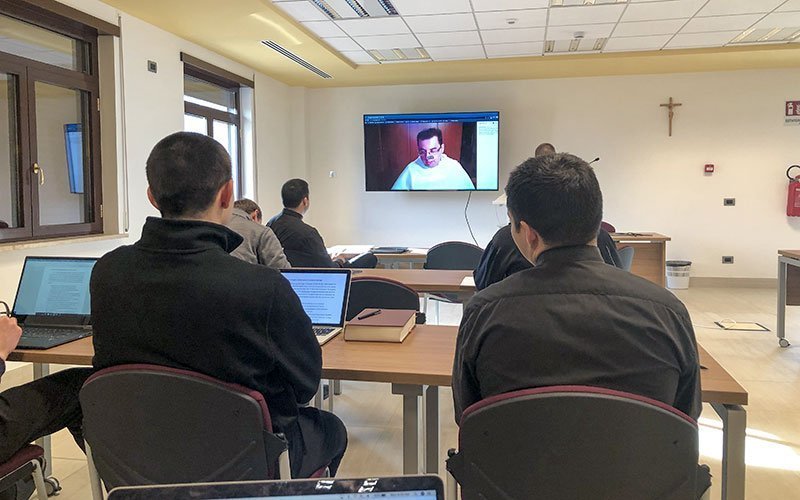 Seminarians participate in their first online course since the start of the COVID-19 quarantines at the Pontifical North American College in Rome, Italy, March 9. (Photo courtesy of Aaron Kelly)

Amid pandemic, half of U.S. seminarians in Rome returned home

After enjoying a one-week break at home in early March, James Muscatella returned to St. John’s Seminary in Boston to finish out the spring semester — or so he thought.

“I was expecting my brother to visit on Palm Sunday (April 5) and my parents on Good Friday,” he said.

Within a matter of days, Muscatella — who belongs to Parish of the Holy Family in Gates — was right back home, due to concerns about the coronavirus in Boston.

Muscatella told the Catholic Courier March 17 that all eight seminarians from the Rochester Diocese who attend St. John’s returned home the weekend of March 14-15, based on a March 13 recommendation from seminary officials. Other St. John’s students for the Diocese of Rochester are George Bastedo IV, from St. Joseph the Worker Parish, Clyde; David Cataline, Our Lady of Peace, Geneva; Steven Lewis, St. Kateri Tekakwitha, Irondequoit; Deacon Joseph Martuscello, Ss. Isidore and Maria Torribia Parish in Steuben County, who is due to be ordained to the diocesan priesthood June 13; Joseph Maurici, St. Martin de Porres, Scottsville; Greg Sheffield, Parish of the Most Holy Name of Jesus, Elmira; and Mark Wegener, Our Lady of Victory, Rochester.

The Diocese of Rochester has 10 seminarians in all. The others are Aaron Kelly of Blessed Trinity/St. Patrick parishes in Tioga County; and Sean Bassler, from St. Mary Our Mother Parish in Horseheads. Both attend the Pontifical North American College in Rome and were still residing there as of March 18 — eight days after Italy put a nationwide lockdown into place in an effort to control the pandemic.

Kelly told the Courier via email March 18 that he and Bassler chose to remain at the Rome seminary until the end of the current semester, whereas approximately half of their fellow students have returned home. He noted that classes there closed March 5 and “within one or two days, we began online classes. It was a surprisingly seamless transition,” he wrote.

“I would say the atmosphere at the seminary is overall positive, prayerful, and hopeful. We have seen the community together to make the most of a situation that has been difficult for everyone,” remarked Kelly, who is in his second year of theology.

He noted that each evening around 6 p.m., the Italian natives enact a “beautiful” ritual — inspired by the lockdown — by opening their windows to play music and sing.

“(They) come together and unite, despite their physical distance, to offer hope and encouragement to one another. We are able to hear this from the seminary roof,” Kelly wrote, adding that on St. Patrick’s Day, a number of seminarians went up to the roof patio and sang songs as well.

Meanwhile, Muscatella said March 17 that he had just begun converting to online classes from St. John’s Seminary instructors, acknowledging that he’d never imagined taking seminary classes in his own childhood home. Seminary officials planned to evaluate over the next two weeks whether he and other seminarians will be able to physically return to school this semester, he said.

Remaining at home for the time being “seemed right, it seemed appropriate,” remarked Muscatella, a pre-theology student in his second year at St. John’s.