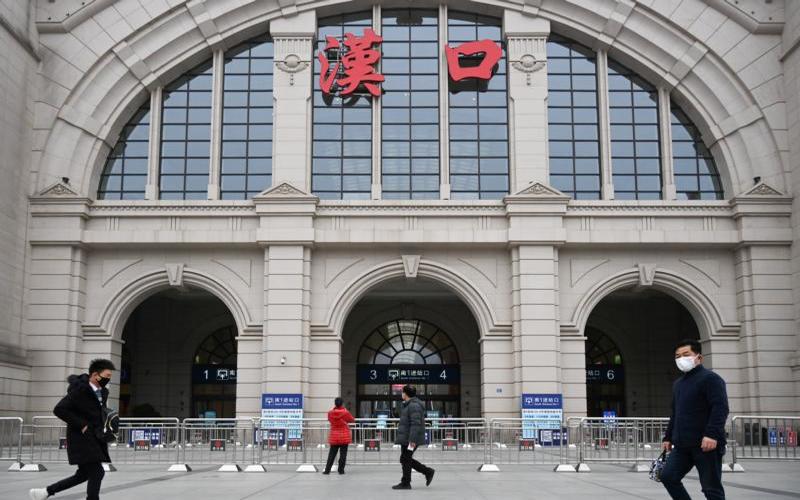 People walk past the closed Hankou Railway Station after the city was locked down following the outbreak of a new coronavirus in Wuhan, China, Jan. 23, 2020. (CNS photo by China Daily via Reuters)

HONG KONG (CNS) — Some churches in China have suspended community activities, including Mass, over fears of the deadly coronavirus virus that has already killed six people and continues to spread, reported ucanews.org.

With Lunar New Year celebrated Jan. 25 this year, this is the busiest travel season, when millions of workers head back to their villages for celebrations.

Hankou Diocese in Hubei province announced the suspension of community activities in all its parishes as the province is on high alert to check the virus, reported ucanews.org

St. Ignatius Cathedral of Shanghai Diocese said Jan. 22 it will be closed temporarily, and no prayer services or Masses will be conducted during Lunar New Year.

Holy Family Catholic Church in Wuchang, which is just across the Yangtze River from Wuhan, has issued a notice suspending all Masses temporarily following a government directive.

Ningbo Diocese in Zhejiang province has asked parish priests not to distribute Communion on tongues from Jan. 22 as a preventive measure. “The church members shall receive the Eucharist in their hands,” it said in a notice seeking parishioners’ prayers to end the epidemic.

A Catholic layman in Hebei, identified only as Paul, said he was “worried that the authorities would use this to crack down on the church.”

“If it spreads quickly and uncontrollably, church meetings and gatherings may be banned. Authorities may also use this a pretext to crack down on the church more severely,” he told ucanews.org.

China’s national health commission has confirmed more than 500 cases of pneumonia with the new coronavirus infection in areas of Hubei, Beijing, Guangdong and Shanghai. More suspected cases were reported from another 14 provinces, it said.

Media reports say Asian nations such as Japan, Thailand and South Korea also have confirmed cases of the virus, which has no medical cure and can become deadly in people with low immunity.

“The situation is serious and beyond the ability of ordinary people to check it,” said a Christian physician who is a member of a team working to check the spread of the virus in Hubei.

Wuhan, the capital of Hubei province, where the viral infection was first reported, remains the worst-hit area with six deaths, including 51 severe cases and 12 critical cases.

The industrial city of 11 million people has temporarily shut all public transport systems and people have been advised not to leave the city in an effort to control the outbreak. The infection manifests itself with symptoms of simple fever but can turn soon into deadly pneumonia.

Since the virus does not respond to antibiotics, people with low immunity, such as children and the elderly, are most vulnerable, a doctor in Hebei told ucanews.org.

“The rate of infection with the new coronavirus pneumonia has exceeded the speed of SARS transmission in 2003,” he said.

Several medical professionals in Hubei told ucanews.org that the administration concealed the detection of the virus from people in the initial days, which made preventive measures impossible.

He said medical staff taking care of patients unaware of the virus were infected. “Some are now in a critical condition. One of the doctors died of the infection.”

Wuhan Wang Baolu, who lives in Hubei, told UCA News that although Lunar New Year is round the corner, not many people are out in the open and in markets. “Just go home and do not stay out for another minute” seems to be the policy for everyone, he said.

Editors: The original story can be found at www.ucanews.org/news/chinese-churches-suspend-masses-as-deadly-coronavirus-spreads/87050