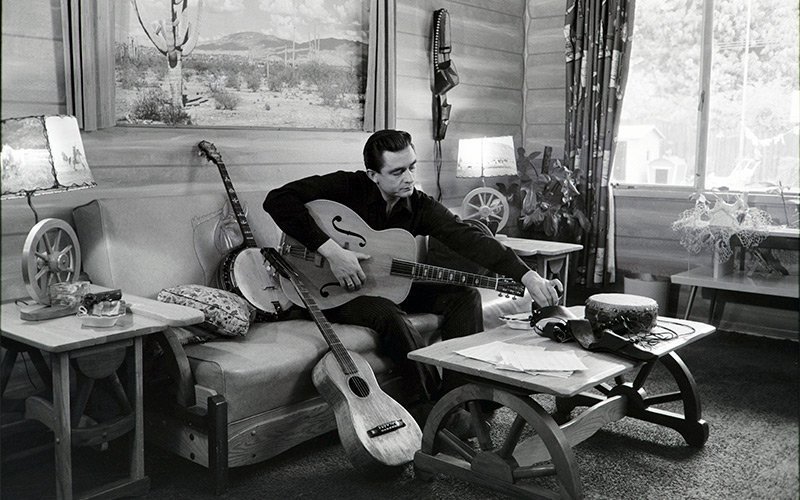 Johnny Cash at his home in California, 1960. (Courtesy of Sony Music Archives)

NEW YORK (CNS) — One of the fall TV season’s more anticipated series, the commendably ambitious PBS documentary “Country Music,” may not always meet expectations. But when it does succeed in connecting, it’s very good.

Working without his frequent co-director, Lynn Novick (“The Vietnam War”), Burns directs from a script by regular collaborator and fellow producer Dayton Duncan. Hearing the wonderfully resonate narration by veteran character actor Peter Coyote, another of Burns’ familiar partners, is like visiting with an old friend.

Eight years in the making, “Country Music” includes more than 100 interviews with historians, disc jockeys, record producers and many celebrated artists. It traces the music’s trajectory over the course of 70 years.

Thus Burns starts with Georgia cotton mill worker Fiddlin’ John Carson’s performances in the 1920s — during which he entertained groups as disparate as the Ku Klux Klan and members of the Communist Party — and ends with Garth Brooks’ sold-out stadium concerts in the 1990s.

As viewers of the 2017 PBS documentary “American Epic” will recall, though, it was Okeh Records producer Ralph Peer who first brought the genre to real prominence. His landmark 1927 recordings of the Carter family — husband A.P., wife Sara and Sara’s sister, Maybelle — as well as of Jimmie Rodgers established these performers as the first nationally known “hillbilly” musicians.

The Carters and Rodgers embodied the tension in the music, representing, respectively, its roots in the church and in the honky-tonk, Sunday morning and Saturday night.

The Okeh recordings worked in tandem with the boost country music was already receiving from radio. The program that would become “The Grand Ole Opry” — originally called the “WSM Barn Dance” — premiered on that Nashville, Tennessee, AM station, founded by the locally based National Life and Accident Insurance Company in 1925. It’s the longest running radio program in U.S. history.

With the Opry at the forefront, Nashville, in the Fifties and into the Sixties, evolved into Music City, and business-minded producers worked to develop the “Nashville sound.” Adding strings and background singers such as the Jordanaires, these arrangements attempted to smooth country’s rough edges, de-emphasizing the fiddle, banjo and steel guitar sounds that had previously defined the genre.

Numerous musicians rebelled against these strictures. Most famously, Willie Nelson and Waylon Jennings, performing in Texas at Austin’s Armadillo World Headquarters in the 1970s, created the so-called outlaw sound, which managed to appeal equally to truck drivers and college-educated hippies.

Salty language and racial slurs occasionally crop up in “Country Music,” and there are some sexual references as well. Discussions of war, poverty, racism, divorce, adultery, domestic violence, excessive drinking and drug use also suggest a mature audience.

Still, the tone is thoughtful and the content educational. So parents of older teens may want to allow them to watch too.

As he always does, Burns makes excellent use of the best available materials, including rare, revelatory archival footage and more than 3,200 candid photographs, each one more striking, vivid and compelling than the last.

“Country Music” loses some steam in the final episode. But its closing sequence focusing on Johnny Cash (1932-2003) epitomizes what the film does well.

Late in life, Cash — who cheated on his first wife, Vivian, by taking up with singer June Carter and whose struggles with drug addiction were well documented — tried to repair his damaged relationship with his and Vivian’s daughter, Roseanne, a talented singer-songwriter in her own right. She recalls joining him on stage in New York to perform his 1958 ballad “I Still Miss Someone.”

By capturing such moments, “Country Music” demonstrates why it represents exceptional television.