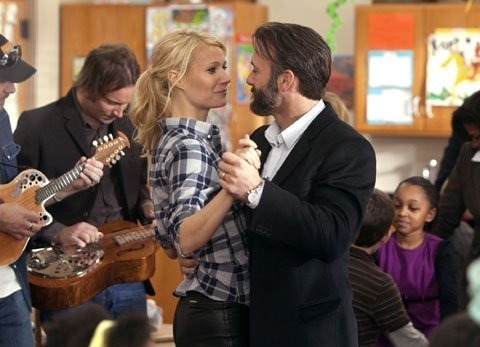 That’s often not a bad thing — or at least excusable — if all you’re looking for is a guilty-pleasure, two-hour escape of nonstop and quite effective country music. Were it only that simple.

Instead, writer-director Shana Feste sends four one-dimensional characters — all of them shown to be moral and caring when their ambitions or pathologies haven’t taken over — spinning like pinballs in a twangy, shopworn tale of substance abuse, adultery and the grim lifestyle played out on a tour bus.

It’s the DNA of most country songs — the sad ones, anyway — but it’s likely to insult its target audience, who are perfectly capable of appreciating a better-limned story.

Gwyneth Paltrow is Kelly Canter, an emotionally fragile country queen who fell into a spiral of alcohol and drugs that resulted in a miscarriage five months into a pregnancy.

Just getting out of rehab as the story begins, Kelly is also coping with a loveless marriage to her ambitious and manipulative promoter James (Tim McGraw). As she explains to her on-again-off-again lover Beau Hutton (Garrett Hedlund), "We don’t kiss with our mouths open anymore."

Right away, James puts Kelly on a comeback tour that is supposed to end in a triumphal return to Dallas, the scene of her miscarriage and disastrous public meltdown. Beau is a very appealing country singer himself, and James pairs him with neurotic beauty queen-turned-singer Chiles Stanton (Leighton Meester) — on whom he has designs as well — to serve as Kelly’s warm-up act.

Kelly — whose mascara is running in nearly every scene (sometimes she’s holding a bottle of booze, too, just to underline the point) — is, of course, in no shape to perform. She can’t finish a song in Houston, is too drunk to perform on "Austin City Limits" and is jealous of Chiles’ youth and beauty. She also occasionally engages in promiscuous sex.

Beau always cares, which is why — in a thoroughly immoral and messy state of, well, affairs — both women share him. James, by contrast, is only interested in getting his wife on stage before the cheering throngs.

In one tasteless sequence involving an image-burnishing visit for the Make-A-Wish Foundation, Kelly warmly improvises a song for a cancer-stricken boy in his classroom. Watching, James briefly realizes why he loved Kelly in the first place and — as her band plays — they pair up and dance, ignoring the sick lad.

At that point we’re forced to wonder: "Who cares what happens to these two self-absorbed clods?"?
The film contains scenes of implied adulterous and premarital sex, pervasive crude language and fleeting profanity. The Catholic News Service classification is A-III — adults. The Motion Picture Association of America rating is PG-13 — parents strongly cautioned. Some material may be inappropriate for children under 13.