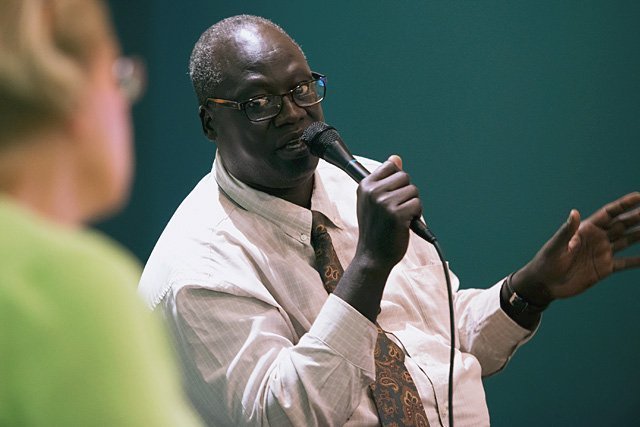 ROCHESTER — Kuc Majak and Achay Dau left Sudan more than two decades ago because of civil wars that ravaged the country.

About 15 years ago, they arrived in Rochester through Catholic Family Center’s resettlement program and soon found their way to St. Mary Church, which is part of the Southeast Rochester Catholic Community.

At the church, they found a spiritual home as well as supporters of their dream to help the children in their native city of Aweil in South Sudan. More recent wars led by the Arab Islamic Regime as well as starvation have left thousands of children orphaned and homeless, the couple said. During an Aug. 21 presentation at the church’s Dugan Center, Dau spoke of an 8-year-old girl she met who is taking care of her infant brother because their parents have died either from starvation or war.

"When I was there, I was crying all the time," she said. "They are really, really poor, these kids." 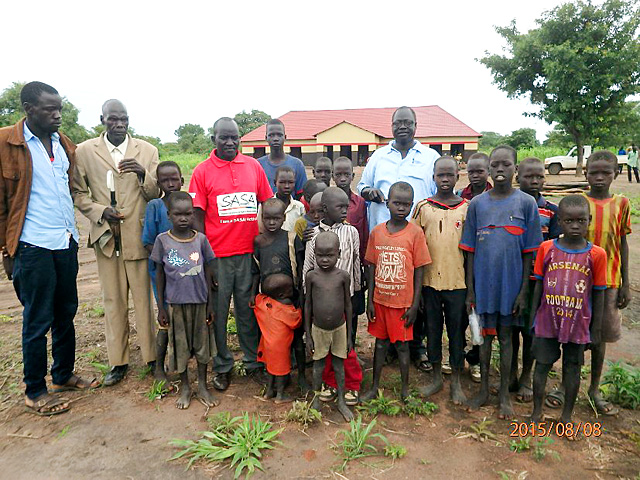 Photo courtesy of William Pickett/vocicss.org
Above, Kuc Majak (back, blue shirt), a parishioner of St. Mary Church in Rochester, stands with students on the opening day for the Vocational Institute for the Children of South Sudan in 2015.

She hopes to find the girl somehow when she visits next to help them, if they have survived, she noted.

Majak said he and his wife have taken upon themselves to do what others won’t. Having been a teacher, he decided to start a vocational school in South Sudan after traveling there in 2007, he said.

"When I went home and I found these kids, the only thing I could give them was an education," Majak said. "And the best thing I could do was provide vocational training … so they could go back to the community and improve their income."

Majak, who has taught English in Sudan, Libya and Yemen, created the African Family Services Foundation in Rochester in 2009 and got to work raising money. St. Mary’s parishioners then stepped in to help by becoming members of an advisory committee of the foundation’s board, said Marvin Mich, a committee member who also is director of social-policy research at Catholic Family Center

The foundation is a 501-3C nonprofit that includes members from several African countries and also serves refugees here, added Majak, who works in the Rochester City School District as a home-school assistant at the All City High School.

Since 2012, the nonprofit has raised $100,000 for the Vocational Institute for the Children of South Sudan to offer them school, food and shelter, Majak said. South Sudan’s provisional government also provided a one-half-square-mile plot of land worth about $50,000 to build the school, he added.

A year ago in August, the school opened its doors for older teenagers who were taken off the streets by the government, which provided them orientation before taking classes, he said. Majak had traveled to Aweil in 2014 and 2015 to oversee construction and opening. Tents also were set up to offer shelter, Majak said, and students are fed one meal a day.

"I couldn’t have finished this thing by myself," Majak said of project. "The team I’ve been working with (at St. Mary), those are the people that really made things possible for us. I was just the idea. … The credit goes to them but not to me. Without their effort, nothing would have happened."

"It really is amazing," Jody Brennan, a parishioner and advisory committee member, said of the project. "They’ve been open a year and teaching 37 students math and (reading) and woodworking. … Given another 10 years, who knows what can happen. One step at a time."

During construction, bricks were laid by villagers and desks were built from wood leftover from the roof work, Majak explained Aug. 21 as he showed a documentary about the school that was produced by a Sudanese television station.

Three weeks ago, woodshop classes began, he said. The school is waiting on sewing machines and tools to begin teaching plastering, flooring and automotive classes as well as more teachers, Majak said.

"We spent the first six months on literacy classes," he said. "It is the beginning of everything. … It’s good, we’re moving."

The school also has begun offering literacy classes for women in the afternoons after school is out for the children, Majak said.

The students are also farming the school’s land and will begin to harvest crops as early as October, he added, as the school adds ox farming to its classes. Crops will include soy, sesame, corn and peanuts. Once they are trained in woodworking, students will be able to build tables and chairs as well, Majak said. All of the crops and products can be used at the school or sold to the community, he said.

"The plan is this institute will support itself," Majak said. "If the numbers grow, they will have their own resources and won’t need anybody."

The couple hopes that the number of students will eventually grow to more than 200 annually.

"I have a dream this is going to grow big," Dau said.

EDITOR’S NOTE: For more information on the Vocational Institute for the Children of South Sudan, visit vocicss.org. The school is in need of used carpentry and welding tools, solar system panels and a shipment container.