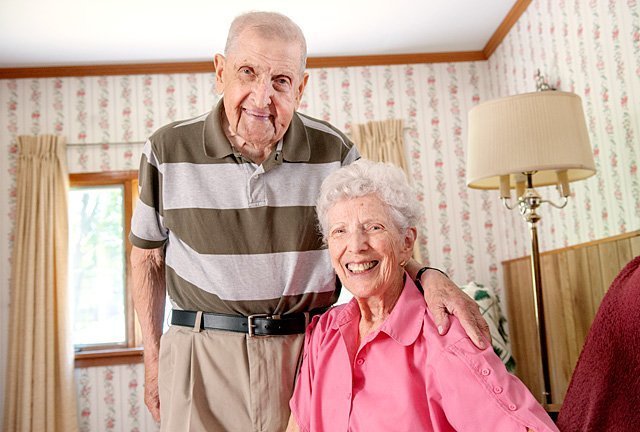 Don and Shirley Maranda, parishioners of Rochester's Our Lady of the Americas Parish, have been married for more than 71 years.

Don and Shirley Maranda’s love story began in an unlikely place — a Bausch & Lomb factory, where they both helped produce bombsights for the warplanes flying missions overseas during World War II.

"He was a lens polisher for bomber sights, and I was the tester. I had to test them after they were polished," Shirley recalled. "Sometimes he didn’t like me too much because I had to send them back."

Nonetheless, the two were drawn to each other. They talked frequently and got along very well, and had similar backgrounds, as both had grown up in poor families, said Shirley, who grew up in Marion. And Don, a Rochester native, said the woman who would become his wife reminded him of his mother, who was the kindest woman he’d ever met, until he met Shirley.

"We’ve been married 71 years now, and it’s even better now than when we first got married," said Shirley, who with her husband belongs to Rochester’s St. Frances Xavier Cabrini Parish.

Their marriage may be better now than in its early days, she added, because by now, she and her husband don’t have unrealistic expectations for each other. The spark between them has not diminished over the years, and in fact the Marandas are quick to point out each other’s best qualities.

"He is a really decent, good, kind gentle man. We have the greatest life," said Shirley, noting that her husband was a wonderful provider for the couple and their daughter, Shirley Ann.

Don wanted his wife to stay at home to be there for their daughter, who walked home from school on her lunch break, and at times he worked two jobs in order to make that possible. Shirley always did an admirable job of handling the family’s finances and never showed her husband a bill, even when they paid for their daughter to earn two college degrees, Don added.

"It’s a gift," he said of his wife’s knack for managing money.

Financial know-how, however, is just one of Shirley’s many gifts, he said, noting that his wife is the best part about his life.

"My wife is so gentle," he said. "She is a wonderful person. People like her. She’s nice to talk to, and … she’s always right there for me."

Frank Kozlowski also said his wife, Eleanor, is always there for him, and has been for the past 70 years. His mobility is becoming increasingly limited as the years go by, and his wife is always there to take on the tasks he no longer can accomplish, Frank said.

"We share everything, and we try to help one another," he explained.

The two met by chance one day when Frank’s family traveled from Rochester to Buffalo trying to find Eleanor’s aunt. The Kozlowski family mistakenly knocked on the door of Eleanor’s mother’s house, instead of her aunt’s house, and Eleanor was quite taken with Frank, who stood on the doorstep with his parents and two brothers.

Frank and Eleanor Kozlowski were married on June 21, 1945, in Corpus Christi Church in Buffalo, and soon after that they moved to Rochester, where they rented a home for several years. In 1951 they purchased land in Chili, and Frank’s brothers helped him build the home the couple still occupies today.

Eleanor always has been a top-notch cook and baker, and still cooks "choice meals," her husband said.

And Eleanor, for her part, said Frank is a very kind and generous man who is a good worker and did a wonderful job of providing for the couple as well as their son and daughter.

When asked what advice she would give to younger couples just starting their married lives, Eleanor’s suggestion was simple.

"Try to be kind to each other," she said.

"Be kind to each other. That’s the important thing," he said, urging couples to remain calm and not become angry with each other. "Shirley and I never argued. If we had differences of opinion we’d talk about it and we always seemed to see each other’s point that way."