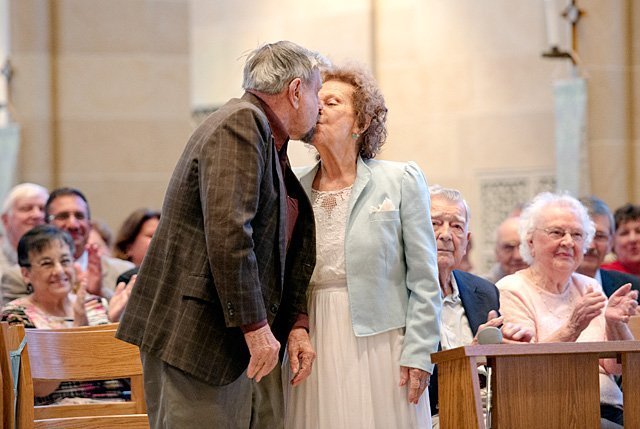 Robert and Dolores Crowell share a kiss during the annual Wedding Jubilee Mass May 17 at Rochester's Sacred Heart Cathedral. They celebrate 66 years of marriage in June.

ROCHESTER — The warm sunshine shone through the stained-glass windows of Sacred Heart Cathedral May 17, just like it did the day of Angela Lauria’s fall wedding.

"It was a beautiful day," Lauria said, thinking back on her nuptials. "We didn’t even need our jackets."

Bishop Salvatore R. Matano spoke of the light and beauty of a stained-glass window as a symbolic representation of the sacred covenant of marriage during his homily at the annual diocesan Wedding Jubilee Mass, where dozens of couples were in attendance to celebrate their special milestone anniversaries.

"Like a stained-glass window, your love will shine differently each day," Bishop Matano said.

Just before the end of the Mass, when it came time to recognize the longest-married couple in attendance, all eyes made their way toward Angela and Tom Lauria of Webster, who stood up together. Immediately, the rest of the couples in attendance got on their feet to applaud the Laurias, who will celebrate 71 years of marriage on Oct. 28.

The Laurias were married on that date in 1944 at Church of the Annunciation on Norton Street in Rochester. Tom, who grew up in Buffalo, met Angela at a gathering at Angela’s aunt’s house in Rochester, Angela recalled. Tom just so happened to be the godson of Angela’s aunt.

"He sent me a letter the next day after he returned to Buffalo, and then he came back to Rochester to spend a long weekend," Angela said. "The rest is just history."

The two celebrated their wedding with a honeymoon to Niagara Falls.

"It was a long three-hour train ride to get there," Angela recalled.

After the Wedding Jubilee Mass, while holding a long bouquet of flowers presented to the couple by Bishop Matano, the Laurias were greeted by dozens of other couples, who congratulated them on their milestone. Some even came up to Tom, 94, saying they recognized him from the Bayview YMCA in Webster. Tom and Angela, 90, said they attend exercise programs at the YMCA and also attend St. Rita Parish in Webster.

Among the couples congratulating them was Eleanor and Frank Kozlowski, who also were given a similar bouquet. The Kozlowskis will have been married 70 years on June 21.

"You got us beat," Frank Kozlowski joked. "Congratulations."

The two couples engaged in a brief conversation and quickly learned that they shared something in common, as Frank also grew up in the Buffalo area.

The Kozlowskis were married at Corpus Christi Church in Buffalo on a hot and humid day in 1945.

The Kozlowskis attend Holy Ghost Parish in Gates and will celebrate their anniversary during a Mass there on June 23.

"Our kids are coming from Las Vegas and Arlington, Va. We are waiting for them to surprise us with something," Eleanor said with a smile.