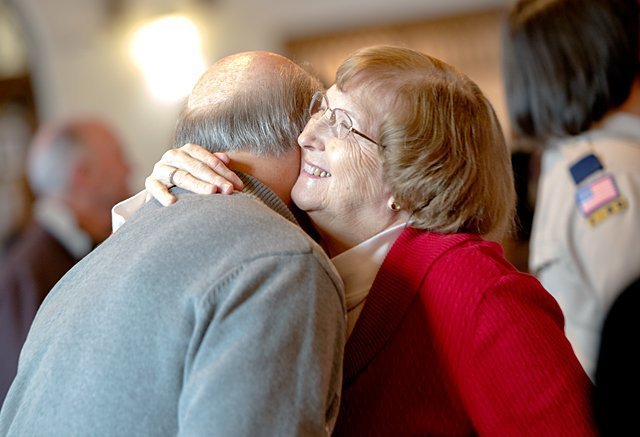 Ron Platten hugs his wife, Judy, after they renewed their vows during a Feb. 14 Mass at St. Patrick Parish in Victor. All married couples were invited to renew their vows following the homily.

VICTOR — Patrick and Gina Quigley recently renewed their wedding vows at St. Patrick Church. They held each other’s hands, looked into one another’s eyes and repeated the words of their marriage vows. Everything was just as it had been at their wedding several years earlier.

Except this time as he recited his vows, Patrick was being hit in the head with a toy truck, courtesy of the wriggling toddler he grasped in his arms.

"Patrick literally had to hold (their son) so he wouldn’t run down the aisle, and as he was holding him, he was getting hit in the head with a Matchbox car," Gina Quigley explained.

Despite the distractions occasionally provided by her three children, ages 2, 4 and 6 years old, Quigley said she was grateful for the opportunity to renew her vows at St. Patrick on Feb. 14.

"I thought it was a great idea, and it just kind of makes you realize how things have changed. Even though you’re getting hit in the head with a toy truck, you realize you’re amazingly blessed," she said.

The parish offered all married couples the opportunity to renew their vows the weekend of Feb. 13-14, which not only was Valentine’s Day weekend but also wrapped up National Marriage Week USA, which is celebrated each year from Feb. 7 through Feb. 14, explained Father Edison Tayag, pastor of St. Patrick. The idea to offer this opportunity to couples came out of the parish’s strategic planning process as parish leaders looked for ways to celebrate milestones in parishioner’s lives and link them with the parish’s sacramental life, he added.

"I think it’s good for us to be more explicit with how we celebrate marriage and family life," Father Tayag explained.

Offering couples this opportunity to renew their vows during a weekend liturgy provided children with the opportunity to watch their parents profess their love for and commitment to each other, he added.

"Hopefully that’s a kind of witness to their married life. And the kids wanted to see their parents kiss," he said with a chuckle. 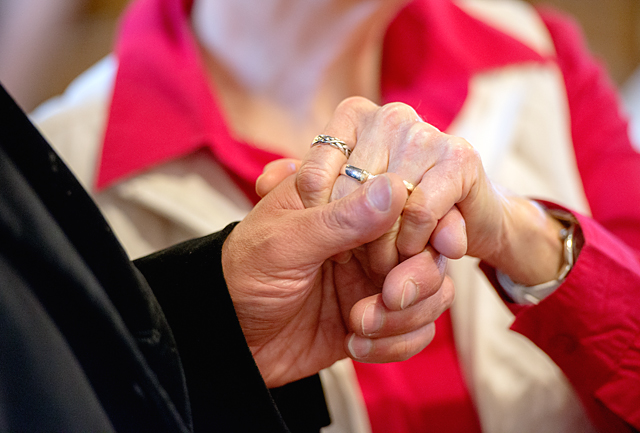 Carlos and Margaret Chaides hold hands during a ring blessing while renewing their vows Feb. 14 at St. Patrick Parish in Victor. All married couples were invited to renew their vows following the homily.

Father Tayag knew this because those children were gathered around him while their parents renewed their vows. He’d called them out of their seats when it came time for him to give the homily, and he sat amongst them and talked about the connections between family life and the three spiritual practices of Lent, which had just started four days earlier.

"In a certain way there is a special connection between this church and your house. Do you know that your houses are called domestic churches? Maybe you can call them small churches. At home there are times when we see that our parents are praying and fasting and almsgiving in a special way," he said.

Father Tayag explained that when parents talk to each other and their children lovingly, in a way they’re actually praying. Similarly, parents are engaging in one form of fasting when they let their children take food they may have wanted and instead go without, he said.

"Not only in church do we learn these practices, but also at home," he said.

Father Tayag then explained that he was about to ask the children’s parents to stand up and profess their love for each other. He asked married couples to stand facing each other and join their right hands. This required a bit of juggling for some couples, including Tyler and Antonette Kerr, who were holding their 4-month-old and 1-year-old while their 3-year-old and 6-year-old children looked on.

After Father Tayag led the couples through their vows, he asked them to hold their left hands as he blessed their rings.

"Lord, please bless these rings and these consecrated couples in their love for each other. May these rings continue to be a symbol of their faith in each other and always remind us of our love of you and each other," he prayed before turning back to the children. "OK, children, should we ask them to kiss each other?"

"Yes!" cheered most of the children, so their parents obliged.

Although the presence of his four children made the logistics of the vow renewal — and particularly of holding hands — more challenging, Tyler Kerr said he enjoyed the moment.

"It was the first time I’ve ever done anything like that. It was nice to be able to have the kids here. We didn’t even know they were going to be doing the vow renewal today," said Kerr, whose family belongs to St. Charles Borromeo Parish in Greece but traveled to Victor that day to bring Valentine cards for Father Tayag.