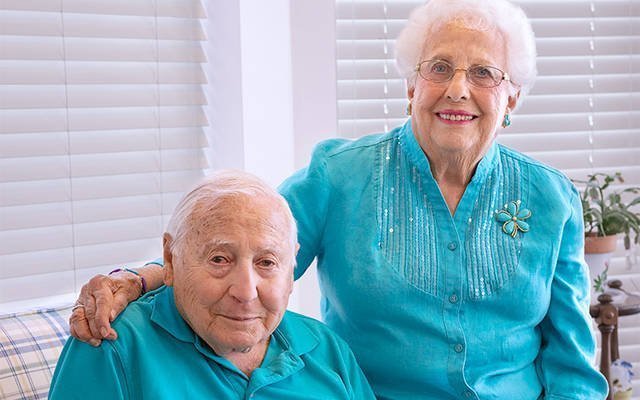 Thomas and Angela Lauria will celebrate 74 years of marriage on Oct. 28.

WEBSTER — Thomas and Angela Lauria say there is no magical formula for married couples to follow in order to achieve their happily ever afters.

A long-lasting marriage simply requires common sense, patience and making time for dancing, they told the Catholic Courier during a May 16 interview in their Castle Pointe at Bay Winde apartment. The couple will celebrate 74 years of marriage on Oct. 28.

“We’ve been dancing all our married life and still are,” said Angela, who will celebrate her 93rd birthday on June 14. She noted that they used to dance jitterbug, cha-cha and samba in their younger days. Even now they will get up and dance when the mood hits them, she added, and they inspire younger couples to get up and dance at their independent living community.

Good communication also is key to a stable marriage, something Angela says she worries about for future generations who have been raised on smartphones and prefer texting to talking.

“There’s a give and take to marriage,” she added.

Thomas, 97, said high divorce rates can be attributed to a lack of the patience and persistence required to get through challenging times in a marriage. While he said he doesn’t feel qualified to give young couples advice, he noted that good relationships boil down to the golden rule: “Do unto others how you would want others to do to you.”

They also encourage couples to be open to adventure and not to wait until they retire to travel. They took several trips to Europe, the Caribbean and around the U.S., they said.

The Laurias, who are parishioners of St. Rita Church, remain active and have dinner regularly with a couple next door or with family members who live in the area. They also take part in happy hour events at Castle Pointe, where they moved a year ago after selling their nearby home, Angela said. They also help out at bingo nights and participate in such events as horseshoe contests.

The two met through her aunt and uncle, who were Thomas’ godparents. He was born in Buffalo and took a three-hour bus ride — the New York state Thruway hadn’t been built yet — to visit his godparents in Rochester in the spring of 1942 when he first met Angela. He continued to court her every weekend for several months. He would arrive at his godparents’ home late on a Saturday after working all day at his family’s shoe shop and leave the next morning, she said.

They were engaged in October of that year, and he left to serve overseas in World War II for two years. During a furlough in 1944, they were married at Church of the Annunciation in Rochester. He was honorably discharged from the U.S. Army in 1945 after his service as a surgical technician on the islands of Puerto Rico and Trinidad caring for wounded soldiers.

A history buff, people often ask him where he went to college, said Thomas, who noted that he didn’t graduate from high school.

“I say I went to the college of hard knocks,” he joked.

After his military service, he carried on the family shoe business. He worked at several shops in Rochester for more than a decade and then operated his own orthopedic shoe and repair store with a partner for 22 years. He retired at the age of 61.

After raising a daughter, Angela attended hairdressing school, learned electrolysis and opened a salon in downtown Rochester that she later moved to Webster. She worked until she was 78.

Their daughter is 71, and they have two grandsons and a great-grandson.

Before their health recently took a turn, another local long-married couple also offered some words of wisdom on marriage.

“They said to always understand each other, a deep love and faith in God, and never, never go to sleep mad at each other,” Janice Delamarter wrote in an e-mail to the Catholic Courier regarding her parents, Frank and Jennie Profeta.

The Profetas will celebrate their 83rd anniversary this year and were married on Aug. 17, 1935, at Our Lady of Mt. Carmel Church in Rochester. Delamarter said that her parents are now 102 and 103 and share a room at St. John’s Home in Rochester.