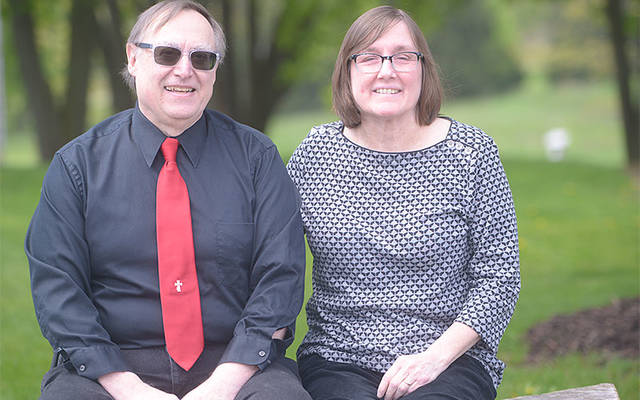 Deacon George and Mary Ann Kozak recently spoke about how they have supported each other during challenging times in their four-decade marriage. (Courier photo by John Haeger)

The longer a couple is married, the more likely they’ll put to the test their wedding-day vows of “for better, for worse, for richer, for poorer, in sickness and in health.”

For Mary Ann and Deacon George Kozak, a major test surfaced with the death of their 17-year-old son five years ago.

For Rose and Jim Gulley, marriage took a new direction after Jim was diagnosed with Alzheimer’s disease in 2015.

Kathy and Kevin Skerrett, meanwhile, weren’t challenged by any one occurrence, but instead experienced a gradual weakening of their relationship.

Yet all three couples have maintained their marital bonds over the long haul: The Kozaks celebrated their 40th anniversary on May 19; the Gulleys have been married for 47 years; and the Skerretts will note 40 years of marriage this coming November.

Their commitments get to the heart of Pope Francis’ words in his 2016 apostolic exhortation Amoris Laetitia, in which he described marriage as “a series of obligations born of love itself, a love so serious and generous that it is ready to face any risk” (No. 131).

The Kozaks have a history of being there for each other during their four-decade marriage. For instance, Mary Ann gave George her blessing to pursue a call to the permanent diaconate, even though he would have to engage in the time-consuming formation process while they were still adding to their family of six children.

“I supported that decision because I felt he was being called, too,” Mary Ann said. Deacon Kozak, who was ordained in 1998, serves the northern Tompkins County cluster of St. Anthony, Groton; Holy Cross, Dryden; and All Saints, Lansing; and Mary Ann is sacramental minister for the three churches.

A different challenge hit the Kozaks when their son, John, died in September 2014 after a brief battle with leukemia. Acknowledging that he’s known marriages to fall apart after the death of a child, Deacon Kozak said that he and Mary Ann were able to share their feelings with each other and be tolerant and supportive when one was having a bad day.

“I guess what they say is, that was a make-or-break situation,” Deacon Kozak said of their son’s death, adding that “we’ve laughed together and cried together. In a way, it’s made our marriage stronger. We feel that we needed each other, and that’s the only way we could make it through. Our communication has always been so important to the two of us.”

The Kozaks said that their faith in God likewise has buoyed them in their own grief and enabled them to support their other children. They added that they love each other more now than ever.

“I think the thing that’s most important is that you should be friends,” Deacon Kozak said in regard to married couples. “I consider Mary Ann my best friend.”

“And I consider George my best friend,” his wife replied.

Four years ago, Jim Gulley told his doctor that he was becoming confused more often and struggling at times to speak clearly. When a diagnosis of early-stage Alzheimer’s disease resulted, his wife made a fast decision: to cease her adjunct teaching position at Monroe Community College — where she had worked since retiring as a high-school math teacher in the City of Rochester — so she could provide whatever care Jim would need going forward.

Rose and Jim also joined an Alzheimer’s couples-support group during that first year. Since then, Rose has consistently joined with her husband in his extensive advocacy work with the Alzheimer’s Association at the local, state and national levels.

Yet Rose doesn’t regard her efforts as anything extraordinary, saying she was raised to believe that marriage is founded on mutual support. She pointed out that years ago, when she was traveling out of town frequently to assist her ailing parents, “Jim was so supportive. He never said don’t go. He took care of everything here.”

The Gulleys are parents of two grown children and belong to St. Joseph Parish in Penfield, where Jim is a former pastoral associate. That position followed a career in computer and network technology, from which Jim retired after suffering a mild stroke in 2009.

Although Jim still converses easily and remains active, he acknowledged that his disease is slowly progressing. For instance, “He used to cook all the time; he was a great cook. But now, (to follow) a recipe is overwhelming,” Rose said.

On the other hand, Rose and Jim said they’ve stuck by each other through many tough circumstances in their married life, so they’re willingly confronting this latest challenge together.

“I think we have come through a lot,” Jim said of their marriage. “And I think every one of the crises has tempered us.”

Between a lack of quality time together, financial concerns, and differing perspectives on spousal roles and parenting their two children, now grown, the Skerretts’ marriage was in need of renewal. In 2004, after many years of counseling yielded only slight improvement, they attended their first weekend with Retrouvaille — an international Catholic program for healing troubled marriages. A Retrouvaille weekend, which is open to people of all faiths, features a mix of presentations and talks by a priest and other married couples. The weekend experience is followed by six weekly meetings as well as the option for a monthly support group.

Retrouvaille played a major role in saving their marriage, the Skerretts said.

“It helped me get rid of the resentment and anger I had,” Kathy said. She and Kevin also said the program gave them communication tools that enabled them to better acknowledge personality differences and to express and interpret feelings, wants and needs.

Kathy and Kevin, who belong to Peace of Christ Parish in Rochester, said the strong improvement in their relationship has lasted to this day — a common occurrence for Retrouvaille couples, they noted.

The Skerretts, longtime Retrouvaille coordinators in the Diocese of Rochester, said that couples interested in the Rochester program or that of a neighboring diocese can email rochesterny@retrouvaille.com, call 585-293-1552 or visit www.helpourmarriage.com.

Whether through Retrouvaille or some other resource, they implored couples with marital difficulties to be open to seeking help.

“If you find you’re fighting a lot, don’t stay in it, don’t stay stuck,” Kevin said. “It’s almost like a social stigma, admitting you’re having trouble and then going to try and fix it.”