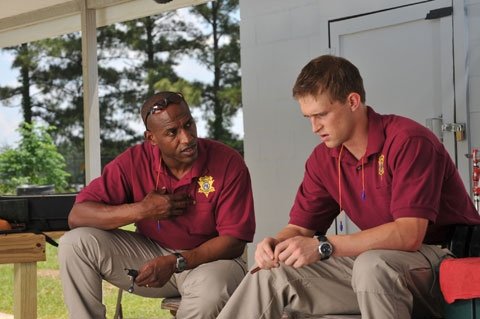 With its latest production, "Courageous" (TriStar), they turn their attention to the important social influence wielded, either for good or ill, by fathers.

They do so via a drama tracing the personal and professional life of devoutly Christian police officer Adam Mitchell (Alex Kendrick). After the tragic death of his young daughter, Adam is left pondering the quality of parenting he offered her during her all-too-brief life, and regretting missed opportunities to demonstrate his love for her.

Determined to be more than just a "good enough" father to his remaining child, teen son Dylan (Rusty Martin Jr.), Adam draws up a Bible-based resolution by which to dedicate himself to the highest standards of paternal conduct.

He then convinces four friends — three of them, Nathan (Ken Bevel), Shane (Kevin Downes) and David (Ben Davies), colleagues from the force, the last, Javier (Robert Amaya), a Hispanic construction worker he recently hired — to join him in a public recitation of the resolution. But a variety of circumstances, including a couple of illustrative moral quandaries, quickly put each dad’s resolve to the test.

Though sometimes heavy-handed, Kendrick, who also directed and co-wrote (with his brother, Stephen Kendrick), crafts an uplifting message movie about the dire consequences of paternal neglect and the Christian principles of sound parenting.

Occasional lapses into preachiness — the final scene centers on an extended speech from a pulpit, no less — are offset by lively action scenes pitting Adam and his fellow patrolmen against a local gang.

Catholic viewers may be saddened to observe that Javier and his family have apparently abandoned the religious heritage of Catholicism in favor of worship in the evangelical mold.

But the ideals on offer, if sometimes seemingly pursued to an extreme — as in the case of Nathan’s refusal to let his daughter date until she turns 17, after which he will need to approve each of her beaux — will nonetheless resonate with, and perhaps inspire, audiences from a wide range of Judeo-Christian backgrounds.

The film contains some gun violence and mature themes, including drug trafficking. The Catholic News Service classification is A-II — adults and adolescents. The Motion Picture Association of America rating is PG-13 — parents strongly cautioned. Some material may be inappropriate for children under 13.