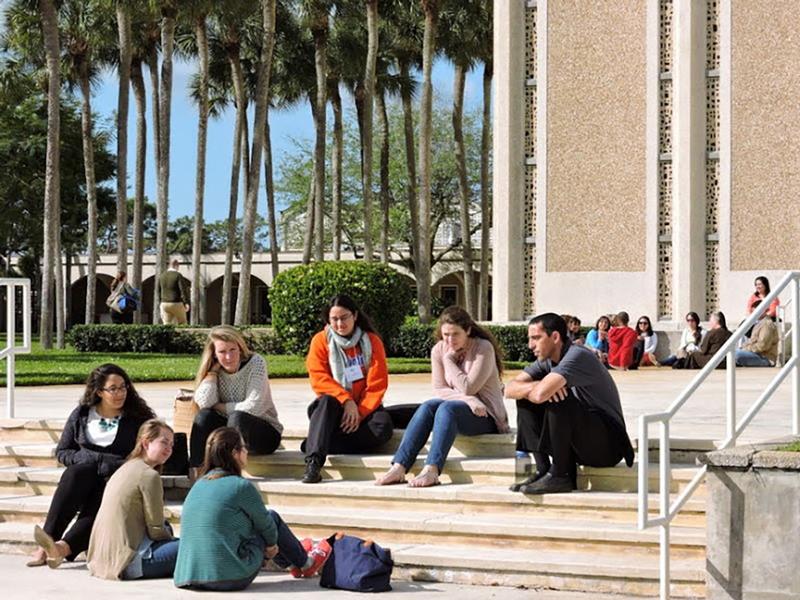 At the same time, young adults also are the church of the present, noted Basilian Father Paul English, pastor of St. Kateri Tekakwitha Parish in Irondequoit.

“They’re the parents of the younger people. They’re the people that we feel we really need to pay the closest attention to,” Father English said.

Unfortunately, however, neither the Catholic Church nor the Catholic Courier has had a stellar track record when it comes to engaging those young adults.

Catholic leaders are concerned about these statistics, according to a 2014 study conducted by the Center for Applied Research in the Apostolate at Georgetown University. That study showed engaging young people was one of the top four concerns expressed by pastors in the United States.

Father English is one such pastor, and St. Kateri is one of many parishes throughout the Diocese of Rochester that is providing opportunities for young adults to learn more about the Catholic faith, ask questions and build relationships with other Catholics. St. Kateri invites young adults and people of all ages to take advantage of its free dinner and conversation series presented weekly at St. Margaret Mary Church.

Other parishes throughout the diocese have offered sessions of the ChristLife faith-sharing program or changed their Mass times in a deliberate attempt to work around the busy schedules of young adults and young families.

“Life is very complicated for everyone these days, particularly if one is young and either working or looking for a job, bringing up a family,” Father English said. “It’s hard to figure out how to prioritize the time in your life, and so we as a church need to be very aware of all the pressures on our brothers and sisters and to respond to those pressures in order to bring the great message the church has had for 2,000 years.”

The Catholic Courier likewise is seeking to reach out to and engage young adults. Its 2016 readership survey found that the average age of the Courier’s readers is 59, according to Hare, who chairs the editorial committee of the newspaper’s board.

“It also found that almost half of younger readers spent 20 minutes or less with the paper every month,” Hare added.

Neither fact is particularly surprising, since people frequently don’t become loyal readers of their local papers until they settle into their career and family lives in communities they care about, he said. In a landscape filled with a virtually limitless range of media options, however, publications cannot afford to sit back and wait for readers to “age into” their products, he added.

“Younger people are making media choices today that will shape their media habits for life. So the Courier needs to find ways to make Catholic media one of those choices,” Hare said. “Of course this is important to the survival of the Catholic Courier, but more important, we want young-adult Catholics — and those who are still seeking a faith community — to have a source of information that will help them deepen their faith experience.”

The Courier recently revised its mission statement to reflect this newfound emphasis on engaging young adults. The mission statement now reads, “The Catholic Courier focuses its coverage primarily on people, ministries, issues and church life within the Diocese of Rochester in order to engage and inform our readers — especially young adults and those seeking ways to connect to a faith community — about Catholicism and how to live it faithfully.”

This new mission pushes the Courier to work to help younger Catholics better understand their faith and find a place and a way to be engaged Catholics, rather than bystanders, Hare said.

“The goal is not just to write about young people, but to identify the questions they struggle to answer, to find the faith experiences that are most meaningful, and to use the technology that makes our stories accessible to them,” he said.

This means readers will see fewer stories about such things as diocesan personnel changes, financial reporting and departmental reorganizations and more stories about people’s faith lives and the way their faith inspires or sustains them, as well as how they relate to their parishes and the church, according to Karen M. Franz, general manager and editor of the Courier and El Mensajero Cat√≥lico newspapers.

Franz quickly noted, however that the shift does not mean the Courier will stop publishing stories about older adults or matters of interest to them. Rather, she explained, the paper’s staff will work hard to find ways to present all of its coverage in a manner that is engaging and accessible to young people as well as their elders.

The Courier already has started to do this, Franz said, citing as examples its presence on Facebook, Twitter, YouTube, Pinterest and Instagram, as well as its recent in-depth, multimedia project focusing on diocesan seminarians. The readership survey indicated that those who access the Courier’s digital content are pleased with it, but that many people — especially young adults — simply are unaware of the publication’s digital offerings, she added.

“We have to reach out — social media, surveys, conversations in parishes, on campuses, Theology on Tap, any place we can communicate directly with young adults,” Hare said. “We have to allow their lives and experiences to help us shape the coverage.”