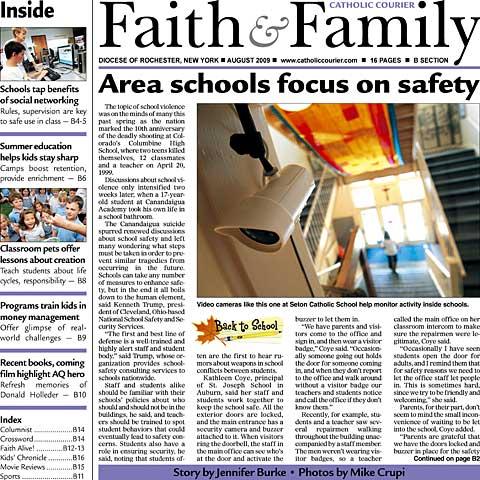 The Catholic Courier won a first-place Catholic Press Association award for its August 2009 "Back to School" issue.

The Catholic Courier recently earned five awards from the Catholic Press Association for work published during 2009.

The CPA, which represents more than 600 Catholic publications in the United States and Canada, presented the awards June 4 during its annual convention in New Orleans, La. Judging was conducted by members of the American Press Institute.

Anwei and Henry Law of Seneca Falls won second place in the Small Publisher category for Father Damien … A Bit of Taro, A Piece of Fish and a Glass of Water, published by the IDEA Center for the Voices of Humanity. The couple’s book is about leprosy, the effect of the disease on Hawaii and St. Damien de Veuster of Molokai, who ministered to those with leprosy in Hawaii in the late 1800s.

"This inspiring story of Father Damien briefly tells the story of the exceptional character and work this priest (did with) lepers during the late 19th century," the judges wrote. "The substantial collection of photographs adds a powerful dimension to the story. Father Damien’s compassion and diligence was nothing short of miraculous."

"A beautifully designed cover leads the reader into well-designed pages of type and photography revealing the dedicated life of Father Damien with the lepers of Hawaii," the judges wrote.