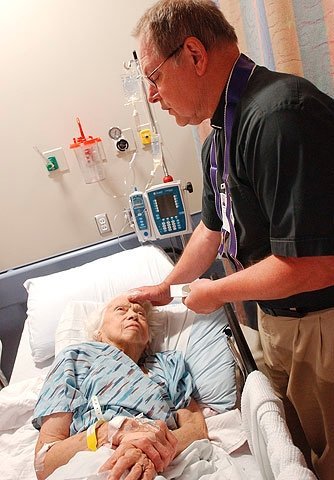 Father Willian endres offers anointing of the sick to a patient at Strong Memorial Hospital in 2005.

If you mention the word "bioethics" to most people, they’ll probably perceive it as a term that’s relevant only to scientists or medical doctors. Yet most of us will be faced with some sort of bioethical issue in our lifetimes, noted Jann Armantrout, life-issues coordinator for the Diocese of Rochester.

People face bioethical issues when they decide how to build their families, what to expect from of their health-care delivery systems and what kinds of advance-care directives to make, she said.

"The beginning and end-of-life issues are the major areas where you do see bioethical issues arise," she added.

Such issues have added significance for Catholics because the church has its own set of bioethical principles, which don’t always line up with their secular counterparts, she said. That’s why the diocese again has teamed with St. Bernard’s School of Theology and Ministry to offer a course in Catholic bioethics. Armantrout teaches the class along with Dr. John Sullivan, a pediatrician with the University of Rochester Medical Center, and Jean Baric, who holds a master’s degree in theology with a concentration in bioethics. All three are certified through the National Catholic Bioethics Center, which is located in Philadelphia.

"We think the Catholic Church has a unique perspective to bring to these issues that isn’t represented by the bioethical principles we encounter in the hospitals in this area," Sullivan said, noting that the class covers such topics as the dignity of the person, the right to life, stewardship of the gift of life, abortion, organ donation, artificial feeding, assisted reproduction and stem-cell research.

The need for such a class became apparent to Armantrout a few years ago while she was giving single-issue presentations at diocesan parishes on such topics as stem-cell research. People were interested in the topics she covered, but also had many questions on other topics in the bioethical field.

"The questions that I was hearing really couldn’t be dealt with in a 90-minute parish presentation, and we needed to have a place to more fully explore those issues of life and death," she said.

The resulting course, "Foundations in Catholic Bioethics," was offered for the first time in the fall of 2011, attracting 25 diverse students, including a priest, a social worker, doctors, nurses, medical students, pro-life activists and laypeople interested in bioethical issues. The four sessions of the course, which this year will begin on Oct. 16, cover secular and Catholic bioethical principles, and the differences between them; beginning-of-life and end-of-life issues; and systemic health-care issues, Armantrout said. The topics covered are complex, but the instructors work hard to make the material easily understood by the average person, she said.

"I think it’s important to offer the class because the ethical issues of today in the health-care field are so important. There’s something new coming out every day, every month, some new technique or scientific advancement," Baric said. "Catholic physicians and nurses and health-care providers really have to be on the forefront of understanding how these techniques stand in light of our Catholic ethics and morals."

Health-care professionals aren’t the only ones who deal with bioethical issues on a daily basis, noted Father Lance Gonyo, who took the course last year.

"As priests, we deal constantly with individuals who are ill and in the hospital, so it’s not unusual for people to ask a priest for advice in terms of Catholic teaching, often when people are facing end-of-life issues. There are also ethical concerns that we have to be attentive to. I thought it was important to keep myself up to date," said Father Gonyo, pastor at St. Rita Parish in Webster.

"Catholics have a wonderful system, a wonderful tradition that they can go back to and examine the new technology in light of these foundational ethical conclusions," Baric said. "We have the foundation, and that foundation is solid. It will not change, no matter what comes along."