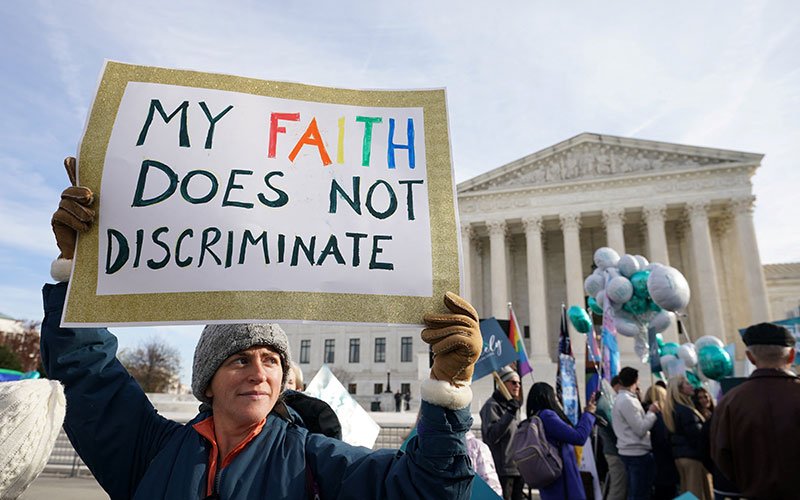 A protester displays a sign during a demonstration outside the U.S. Supreme Court in Washington Dec. 5, 2022, as justices hear arguments in the case of a Colorado website designer who refuses to create websites for same-sex marriages due to her Christian beliefs about traditional marriage. (CNS photo by Kevin Lamarque/Reuters)

WASHINGTON (CNS) — In a case examining the scope of free speech protected by the First Amendment, the Supreme Court Dec. 5 ultimately seemed to favor a broad view of free speech.

And in this case, the speech involved what a graphic designer who creates websites should not have to say.

Colorado designer Lorie Smith, who runs a web design company called 303 Creative, has said she should not be required to create wedding websites for same-sex couples based on her Christian beliefs about marriage.

Colorado state law forbids businesses from discriminating based on sexual orientation. Smith contends her First Amendment right to free speech exempts her from the law.

But she lost her case in the lower court when the 10th U.S. Circuit Court of Appeals ruled that the state has a compelling interest to protect its citizens “from the harms of discrimination.”

Kristen Waggoner, the Alliance Defending Freedom attorney representing Smith, before the Supreme Court, specifically argued that companies whose work centers around expression have First Amendment protections from being compelled to say things that go against their personal beliefs.

If Smith’s case sounds familiar, that’s because it is very similar to a recent case involving a Colorado baker who refused to make a custom wedding cake for a same-sex couple based on his religious beliefs.

In 2018, the Supreme Court ruled that the baker’s refusal to make a wedding cake did not violate Colorado’s anti-discrimination law.

In its ruling, the court did not specifically deal with First Amendment protections  allowing businesses to refuse clients’ requests based on the owners’ religious convictions.

A ruling in favor of the web designer in this case could give broad leeway to business owners to deny services based on their own beliefs and would trump anti-discrimination laws.

The U.S. Conference of Catholic Bishops, joined by the Colorado Catholic Conference and other religious groups, sided with the designer as they did with the baker five years ago. In their amicus brief they said this case gives the court the chance to clarify free speech issues it said the court fell short of doing in the previous case, Masterpiece Cakeshop v. Colorado Civil Rights Commission.

In the current case, Smith, has not denied a service as the baker did in refusing to bake a custom cake for the same-sex couple. Smith is asking the court to weigh in before she even begins designing wedding websites, saying she has been worried that her refusal to design a same-sex wedding website would violate Colorado’s public accommodations law.

Some of the justices brought up hypothetical cases that could come up if they ruled in the state’s favor asking Colorado Solicitor General Eric Olson if people could be forced to write news releases for the Church of Scientology or a Black Santa actor could be forced to pose with a child in a Ku Klux Klan outfit — incidents that Olson said would not apply under the state’s law.

Conversely, Justice Sonia Sotomayor asked if a ruling in favor of the designer would mean web designers could refuse to work with interracial couples or disabled couples.

A majority of the justices seemed willing to carve out narrow exemptions to discrimination laws.

Justice Clarence Thomas emphasized that this case was distinct from other public accommodations cases because of the speech aspect, pointing out: “This is not a hotel, this is not a restaurant, this is not a riverboat or a train.” Similarly, Justice Brett Kavanaugh asked about how one would determine even within the wedding industry what types of services count as speech.

In response, Waggoner told the court she wouldn’t be in front of them today representing a caterer, for example, but she would likely represent a custom wedding cake designer, bringing the previous court case to mind.

The USCCB’s brief said there is a “pressing need for the court to clarify how the compelled speech doctrine applies to wedding-vendor cases and other disputes.” It urged the justices to do what they have done in the past: “Apply the Free Speech Clause to protect religious speech, thereby strengthening liberty not just for the religious but for all society.”

It also said the current case “provides an appropriate and especially important opportunity to invoke free speech protections again to address the ongoing tensions in wedding-vendor cases and in the current cultural context more broadly” and implored the court to “protect individuals from compelled speech and to provide space in the public square for minority voices.”

Other groups that filed briefs on behalf of the wedding vendor included Catholicvote.org, the Thomas More Society, the Catholic League for Religious and Civil Rights and the Becket Fund.

DignityUSA, an unofficial Catholic support group for gay Catholics and their families, and New Ways Ministry, a Catholic pastoral outreach to LGBTQ people and their families, joined a brief filed by 30 religious and civil rights groups opposing the graphic artist’s case.

“Carving out this broad exemption would allow public businesses to legally exclude customers based on their identities,” it said, adding that “instead of safeguarding every citizen’s right to buy goods and services from businesses open to the public,” the proposed exemption “would further hurt the very people these civil rights laws were designed to protect.”

Twenty states supported Smith in friend of the court briefs. They say that they have public accommodation laws on the books, but their laws exempt those businesspeople who make their living creating custom art. Twenty-two states support Colorado and have similar laws in place protecting people from discrimination, which is also backed by the Justice Department.

A decision in the case is expected in late June.