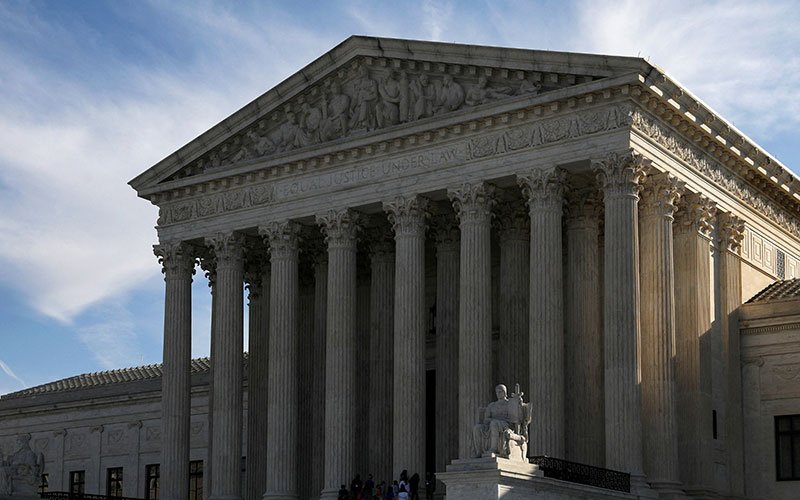 The Supreme Court is seen in Washington March 15, 2022. (CNS photo by Emily Elconin/Reuters)

WASHINGTON (CNS) — The Supreme Court March 24 ruled in favor of a Texas prisoner who wanted his pastor to pray aloud over him and place his hands on him in the execution chamber.

Although the 8-1 decision specifically focused on the case of prisoner John Ramirez, it also will likely impact the cases of other death-row prisoners with similar requests.

Chief Justice John Roberts, who wrote the majority opinion, said: “It is possible to accommodate Ramirez’s sincere religious beliefs without delaying or impeding his execution.”

Ramirez — sentenced to death for the murder of a convenience store clerk in 2004 — had asked that his Southern Baptist pastor be able to lay hands on him and pray aloud with him during his execution.

When the Texas prison system rejected his request, Ramirez challenged it in court, saying the state was violating his religious beliefs.

The lower courts sided with the state, saying the prison system has a compelling interest to keep executions safe and orderly. Then just hours before his scheduled execution last September, the Supreme Court granted a temporary stay and agreed to hear the case, which the justices did in November.

In its ruling, the Supreme Court said the U.S. Court of Appeals for the 5th Circuit was wrong to deny Ramirez’s stay of execution and it handed the case back to lower courts for further consideration.

Justice Clarence Thomas, who dissented, said he would have dismissed Ramirez’s claim because the prisoner did not exhaust other possibilities before filing suit. He also said that tools to protect religious liberty can be “wielded abusively.”

“And few have a greater incentive to do so than death-row inmates,” he said.

Roberts wrote that there was reason to view Ramirez’s request as sincere, noting that asking to have “his pastor lay hands on him and pray over him during the execution” are traditional forms of religious exercise.

“There is a rich history of clerical prayer at the time of a prisoner’s execution, dating back well before the founding of our nation,” he added.

He also noted that he did not see how “letting the spiritual adviser stand slightly closer, reach out his arm, and touch a part of the prisoner’s body well away from the site of any IV line would meaningfully increase risk.”

The chairmen of two U.S. Conference of Catholic Bishops’ committees said in a March 30 statement that the court “has done the right thing in its ruling to honor Mr. Ramirez’s right to seek the mercy of God at the moment of his death.”

“As fallen creatures, we are all in need of God’s grace and forgiveness,” the statement said, noting that Ramirez had asked the state “to allow him what he sincerely believes he needs to prepare for the end of this life.”

“The Supreme Court has rightly ruled that the state did not meet the appropriately high bar the law sets to deny the condemned the accompaniment that their religion prescribes,” said Cardinal Timothy M. Dolan of New York, chairman of the Committee for Religious Liberty, and Archbishop Paul S. Coakley of Oklahoma City, chairman of the Committee on Domestic Justice and Human Development.

The Texas Catholic Conference of Bishops, the public policy arm of the state’s 21 bishops, similarly issued a March 30 statement in favor of the court’s decision.

“Allowing a prisoner to seek mercy at the moment of his death should be a minimal expectation of our society. When a person’s life is already being taken from him, is it too much to simply provide that person with a warm touch and a prayerful presence?” the bishops asked.

During oral arguments, it was not clear how the court would rule in this case as some of justices questioned if allowing the prisoner’s request would open up other appeals or impose a safety risk.

Sister Helen Prejean, a Sister of St. Joseph of Medaille, who is a longtime opponent of the death penalty, tweeted March 24 that she was proud to have been part of an amicus brief siding with the prisoner.

“There was no legitimate reason for Texas to restrict these dignified, prayerful actions in the execution chamber,” she said, adding that she was glad the court agreed.

Last fall, she tweeted that she and the other spiritual advisers and former corrections officials in the brief “believe that the Texas execution protocol violates basic principles of human dignity and religious liberty.”

The Supreme Court has looked at spiritual advisers accompanying inmates during executions several times in recent years with differing opinions. Texas has also had different views on the presence and role of spiritual advisers in the execution chamber.

A specific law at issue in this case was the Religious Land Use and Institutionalized Persons Act, or RLUIPA, passed by Congress in 2000.

During oral arguments, Justice Sonia Sotomayor reminded the attorneys arguing against the inmate’s request that “prisons have to work in good faith to accommodate” prisoners’ spiritual needs.

Eric Feigin, assistant to the federal solicitor general, said prisons would have to determine the sincerity of the inmate’s request. That issue came up repeatedly when justices questioned whether inmates’ religious accommodation requests were always sincere or if they were possibly trying to “game the system” by various appeals.

Seth Kretzer, Ramirez’s attorney, noted that his client was not trying to bend the rules. He also pointed out that chaplains have never caused the disruption of an execution.

The USCCB, joined by the Texas Catholic Conference of Bishops, filed an amicus brief in this case that said the role of spiritual advisers to prisoners “is of particularly grave importance at the moment of death.”

Such guidance, the brief said, is “constitutionally protected from government interference.”

The bishops said for the state to allow Ramirez spiritual assistance does not “render his execution a just act” or essentially give a blessing to it, adding that the state “should act with justice by sparing Ramirez’s life. If it will not, it should allow him to seek the mercy of God at the moment of his death.”

Prior to the oral arguments, John Meiser, supervising attorney of the University of Notre Dame Law School’s Religious Liberty Clinic, said it is “difficult to see in Texas’ newest policy anything other than callousness toward those it has condemned to die.”

He also questioned why there was “such reluctance to accommodate these simple requests” especially since the state has “consistently claimed to be a champion of religious liberty.”