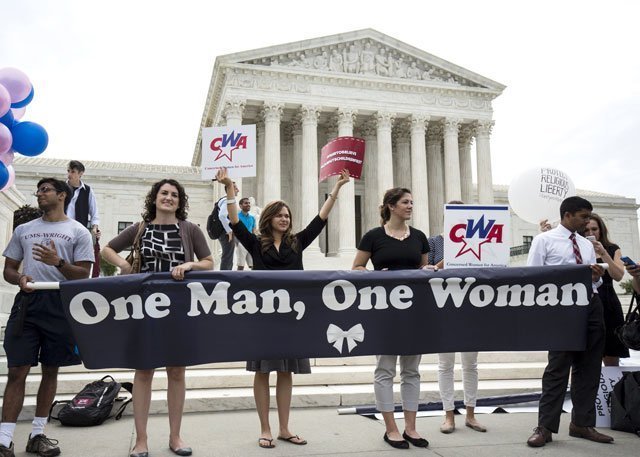 Supporters of traditional marriage between a man and a woman rally in front of the U.S. Supreme Court in Washington June 26, shortly before the justices handed down a 5-4 ruling that states must license same-sex marriages and must recognize same-sex marr iages performed in other states.

"The nature of marriage is that, through its enduring bond, two persons together can find other freedoms, such as expression, intimacy, and spirituality," wrote Justice Anthony Kennedy for the 5-4 majority. "This is true for all persons, whatever their sexual orientation."

In a second part of the ruling, the court affirmed that every state must recognize marriages performed in other states, a question that will become moot as the first part of the opinion is enacted. As of June 26, 36 states, the District of Columbia and Guam allowed same-sex marriage. Some of those states passed laws allowing it, while others have done so under court ruling.

Recognizing in several places the role of religious beliefs in the questions surrounding same-sex marriage, Kennedy said toward the conclusion of his 28-page opinion that "it must be emphasized that religions, and those who adhere to religious doctrines, may continue to advocate with utmost, sincere conviction that, by divine precepts, same-sex marriage should not be condoned."

The First Amendment ensures protection for religious organizations and individuals as they seek to teach the principles "that are so fulfilling and so central to their lives and faiths," he continued, and to "their own deep aspirations to continue the family structure they have long revered. The same is true of those who oppose same-sex marriage for other reasons.

"In turn, those who believe allowing same-sex marriage is proper or indeed essential, whether as a matter of religious conviction or secular belief, may engage those who disagree with their view in an open and searching debate. The Constitution, however, does not permit the state to bar same-sex couples from marriage on the same terms as accorded to couples of the opposite sex."

Obergefell v. Hodges bundled four cases out of the 6th U.S. Circuit Court of Appeals, from Tennessee, Michigan, Kentucky and Ohio, each of which had limited marriage to heterosexual couples. The circuit court upheld the state prohibitions on same-sex couples being entitled to marry.

The plaintiffs who sued raised a variety of issues that affected them. James Obergefell, for whom the case is titled, sued after the state of Ohio refused to list him as the surviving spouse on the death certificate of his husband, John Arthur, who he married in Maryland. A Michigan couple sued after they were denied the right to jointly adopt the children they are raising together. Two other cases challenged Tennessee’s and Kentucky’s refusal to recognize their marriages from other jurisdictions.

Shortly after the opinion was announced, Kentucky Gov. Steven Beshear ordered county clerks to immediately begin issuing marriage licenses to same-sex couples who seek them. The Associated Press reported that same-sex couples in some jurisdictions in Georgia, Texas and Arkansas already were being married.

The four justices who dissented in the ruling did so with vehemence. Each wrote a separate dissent, with different combinations of the four signing onto each others’ opinions.

Chief Justice John Roberts, joined by Justices Antonin Scalia and Clarence Thomas, focused primarily on the argument that the court was acting precipitously, ruling on a matter that the states are still considering.

Roberts made appoint of acknowledging that the petitioners seek marriage "because of their respect — and need — for its privileges and responsibilities."

If their intent was "to demean the revered idea and reality of marriage," he said their claims "would be of a different order."