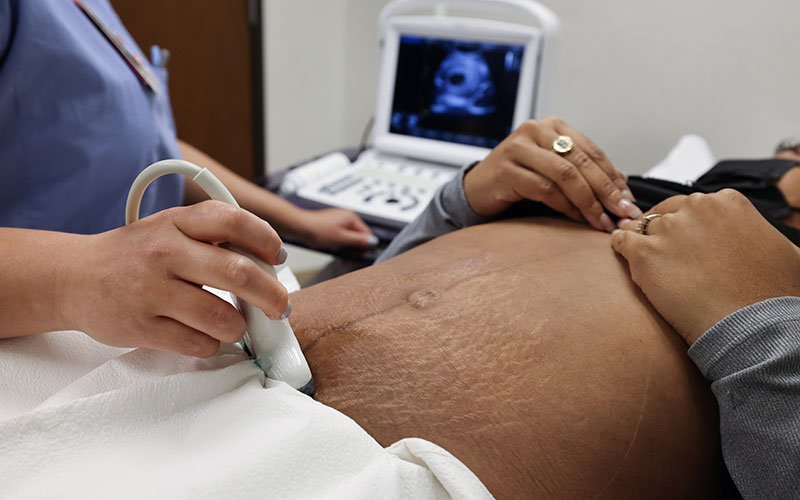 An ultrasound is conducted in this illustration photo. (CNS photo by Evelyn Hockstein/Reuters)

WASHINGTON (CNS) — A federal appeals court sent a challenge to the Texas abortion law back to the state’s Supreme Court Jan. 17.

The decision leaves the law in place and is expected to delay action on reviewing a challenge to this law, which bans most abortions after six weeks of pregnancy.

Abortion providers had asked the U.S. Supreme Court in early January to order the appeals court to send the challenge back to the federal District Court in Texas that had previously blocked the law.

The 2-1 decision by the 5th U.S. Circuit Court of Appeals, based in New Orleans, stressed that the court was being consistent with the Supreme Court’s ruling on the Texas abortion law in December. The nation’s high court said the law could remain in effect while clinics continued to challenge it.

The appeals court justices wrote in the majority opinion that they were trying to avoid causing “needless friction” with the state court over how the abortion law is interpreted.

Texas Right to Life called the decision “great news for Texas because such action is more likely to ensure a just and favorable ruling, compared to that which could be expected from a pro-abortion federal district judge, to whom the abortion industry asked to send the case.”

Nancy Northup, president and CEO of the Center for Reproductive Rights, a group challenging the Texas law, said in a Jan. 17 statement that the appeals court “defied a Supreme Court ruling and delayed a reckoning” on the state’s abortion law.

“There is now no end in sight for this injustice that has been allowed to go on for almost five months,” she said.

The state’s abortion law, signed by Republican Gov. Greg Abbott last May, went into effect Sept. 1. It has faced multiple legal challenges since then.

Texas Right to Life said in its Jan. 17 statement that sending the lawsuit to the state’s Supreme Court was “appropriate because the only defendants left in the case are state agencies.”

The appeals court ruling said the state should examine if the Texas attorney general, the state’s medical board and other licensing officials can take action to enforce violations of the abortion law.

The state’s law currently allows individuals to sue abortion providers for abortions that take place and says the individuals could be entitled to $10,000. The Supreme Court  allowed the challenge to the abortion law to continue in lower courts if it focused on the role Texas medical licensing officials play in enforcing the state law.

When the Supreme Court first ruled against blocking the Texas abortion law last September, the Texas Catholic Conference, the public policy arm of the state’s Catholic bishops, said this was the first time since Roe v. Wade that the nation’s high court “has allowed a pro-life law to remain while litigation proceeds in lower courts.”

Last December, the Supreme Court examined Mississippi’s ban on most abortions after 15 weeks of pregnancy and heard requests to overturn the court’s 1973 Roe decision that legalized abortion.

In the oral arguments, the majority of justices seemed willing to let the state’s abortion ban stay in place.

If the court ultimately sides with Mississippi, it would be the first time the court would allow an abortion ban before the point of viability — when a fetus can survive on its own that most consider to be at 24 weeks.

A ruling allowing Mississippi’s law to go forward could lay the groundwork for abortion restrictions in other states.

The nation’s high court could potentially rule on the Mississippi case before the Texas Supreme Court issues its decision on the Texas abortion law.

Tags: Abortion
Copyright © 2023 Catholic News Service, Inc. All rights reserved. Linking is encouraged, but republishing or redistributing, including by framing or similar means, without the publisher's prior written permission is prohibited.