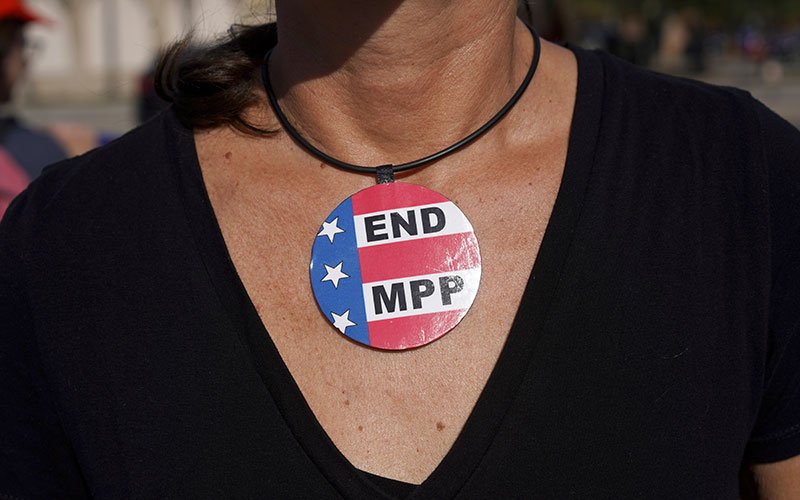 A demonstrator outside a U.S. Customs and Border Protection building in Brownsville, Texas, wears a necklace that reads "END MPP," to protest against Migrant Protection Protocols Jan. 12, 2020. (CNS photo by Go Nakamura/Reuters)

WASHINGTON (CNS) — The justices on the country’s highest court have agreed to hear a case that could decide the fate of a Trump-era immigration policy that Biden administration officials have been trying to end.

On Feb. 18, the U.S. Supreme Court said it would hear arguments on whether the Biden administration can put an end to the Migrant Protection Protocols, or MPP, a policy that demands asylum-seekers to the U.S. to stay in Mexico until their cases can be heard in U.S. immigration courts.

The policy has been a headache for the administration as President Joe Biden promised to end it, but it proved much more difficult to do so once he took office. As soon as he became president in January 2021, Biden paused the policy, then formally sought to end it a few months later in June.

But in August of that year, a judge with the U.S. District Court for the Northern District of Texas told administration officials that they had to continue complying with the policy, saying they had not ended it properly.

The Supreme Court refused a Biden administration request to block that District Court ruling while the government pursued an appeal with the New Orleans-based 5th U.S. Circuit Court of Appeals. In December, the appeals court upheld the lower court ruling.

Subsequent attempts at ending the policy have failed and it looks as if the high court will be the ultimate arbiter when it hears oral arguments the case, Biden v. Texas, in April.

Immigration supporters, including many Catholic organizations, have railed against the Biden administration for not keeping its word on ending the policy, also called “Remain in Mexico.”

In December, just before Biden administration officials restarted the program, a large group of women religious and their supporters demonstrated outside the White House, shouting just a few feet away from the president’s residence to end the policy.

MPP was put in place in earnest in 2019 under the Trump administration. Opponents of the policy say migrants have been put in danger or killed by being forced to stay in dangerous border towns, as well as in unsafe living conditions as they wait for hearing.

Biden administration officials said they had made some improvements to MPP, but many advocates for immigrants weren’t convinced.

The head of the U.S. Conference of Catholic Bishops’ migration committee, Auxiliary Bishop Mario E. Dorsonville of Washington, said in December the better way forward was to end it altogether.

“We are deeply dismayed by the reimplementation of MPP,” Bishop Dorsonville said in December. “Unfortunately, attempts by the (Biden) administration to make this program ‘more humane’ — however well-intentioned — will not cure its inherent faults, nor will they alleviate its inevitable toll on human lives.”

The justices could hand down a decision sometime in June or July before summer recess.