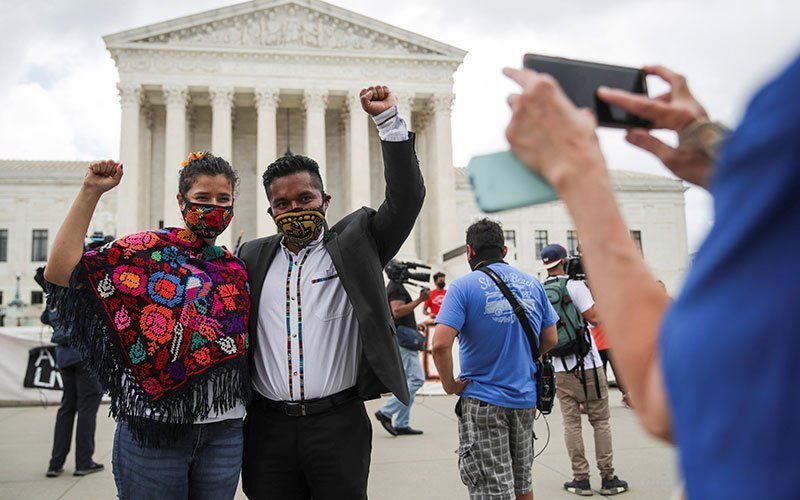 Gabrielle Betances and her husband, Luis Aguilar, a DACA recipient from Mexico, pose for a picture near the U.S. Supreme Court building in Washington June 18, 2020. (CNS photo by Jonathan Ernst, Reuters)

WASHINGTON (CNS) — DACA recipients and advocates breathed a collective sigh of surprised relief June 18 when the Supreme Court ruled against efforts by the Trump administration to end the immigration program that has hung in the balance for the past three years.

But supporters of the Deferred Action for Childhood Arrivals program, or DACA, didn’t celebrate for long before taking a realistic look at what just happened and the road still ahead.

They tempered their reaction with the caveat that it was just a first step and also a narrow win. “It’s a victory for right now,” said Ashley Feasley, director of policy for Migration and Refugee Services for the U.S. Conference of Catholic Bishops.

Ilisa Mira, an attorney with Catholic Legal Immigration Network, or CLINIC, in its Oakland, California, office, said: “DACA has always been temporary, and it’s still under threat. Really, the only way to have a solution is for Congress to act.”

Or as another CLINIC attorney, Jennifer Riddle, based in Asheville, North Carolina, put it: The court’s ruling was a “temporary victory” that leaves DACA recipients “in a holding pattern.”

But a holding pattern’s instability is still a step above limbo, the word frequently used to describe the status of DACA recipients during the past three years since President Donald Trump issued an executive order to end the Obama-era program that had enabled 700,000 qualifying young people, brought to the U.S. as children by their parents without legal documentation, to work, go to college and get health insurance — and not face deportation.

President Barack Obama used an executive order to establish the program in 2012.

The high court’s combined decision on three separate appellate court rulings that blocked Trump’s order did not clear the way for DACA recipients, known as Dreamers, to be on a path toward citizenship nor did it offer assurance the program that enabled them to get jobs or a college education would stay in place.

Basically, the ruling left DACA in place, for now — protecting recipients from deportation and enabling them to still receive benefits such as work authorization — emphasizing the president went about rescinding the program in the wrong way.

Immediately, Trump showed his displeasure by tweeting that the decision was one of the “horrible and politically charged” decisions that were “shotgun blasts into the face of people that are proud to call themselves Republicans or Conservatives.”

But by the next day, he vowed to do something about the court’s action, saying he would submit “enhanced papers” to comply with requirements to end DACA. “Nothing was lost or won,” he tweeted, saying the court had punted on the decision and the administration would simply try again.

And by the next night, at his campaign rally June 20 in Tulsa, Oklahoma, Trump was calling the court’s decision a win for his administration. “People don’t understand, but we actually won on DACA yesterday. We actually won, because (the court) basically said: ‘You won, but you have to come back and redo it.'”

Redoing it is a definite possibility for the Trump administration, but it is one that will “likely immediately be mired in litigation,” said Feasley in a June 19 webinar sponsored by the USCCB’s Justice for Immigrants campaign.

Mira, who also took part in the webinar, said it is highly likely the Trump administration will “continue to fight this and try to terminate DACA.” Most likely, she said, the Department of Homeland Security could issue a regulation that would need a notice and comment period and could take months to complete. Trump could also issue a new memo that would satisfy what the court was looking for but would “bring up more litigation.”

If Trump goes with the second option, Feasley said, “it would face a number of challenges and delays, right up to the presidential election.” It also would make DACA a big election issue where Trump would “have to actively choose to end (DACA) or not.”

For supporters now, it is a matter of waiting and seeing what the administration will do, but not waiting idly.

Advocates say the ball is in the Senate’s court now since the House already passed immigration legislation last year with the Dream and Promise Act that gives Dreamers and those with temporary protected status, or TPS, a path toward citizenship.

“We have to keep fighting and we have to keep working,” said Jose Cabrera, director of education and advocacy for migration for the Ignatian Solidarity Network, who also is a DACA recipient.

Cabrera, who came to the United States from Mexico with his mother when he was 4, said he had not expected the court to rule as it did, but the night after the decision, for the first time since 2017, the year Trump ordered a stop to the program, Cabrera said he slept with the security of knowing he and his family would not face deportation.

But like the others who cheered this vote, he also said there’s more to be done. “I knew in my core this isn’t enough,” he said, stressing that now, more than ever, the Senate needs to be pushed to provide a clean pathway to citizenship that does not put others without legal documentation in jeopardy.

Feasley told webinar participants, including Catholic activists from around the country, that there is a tight timeline to lobby for action on a permanent path to citizenship, noting Congress will go into recess in August and by Sept. 30, the end of fiscal year 2020, Congress needs to pass legislation to fund the government for the next year; after that there are the November elections and a possible lame duck session of Congress.

“We can’t let the Senate get a pass,” she said, saying this issue is right up there with important issues of the current moment focused on COVID-19 and racial justice.

When asked if this could wait until after the November elections, Feasley was adamant it could not, “especially if the president is doubling down; it really is time.”

Another unknown factor in the mix that Mira pointed out is a lawsuit filed two years ago by Texas and six other states claiming Obama exceeded his authority by implementing DACA by executive order.

U.S. District Court Judge Andrew Hanen of Brownsville, Texas, said the Obama administration went too far with DACA, but last year he did not issue an injunction to end the program, saying the challengers had waited too long to seek the order. But after the Supreme Court’s ruling, he told all sides in the case to file papers by July 24 to indicate where the case stands in light of the high court’s decision.

In this time of waiting to see how the Trump administration fights back and before DHS reopens the application process for potential DACA recipients, lawyers for CLINIC said those who wish to apply — a number that is around 60,000 of those over age 15 who would qualify — should work on getting their paperwork ready and seeking legal advice.

And for everyone else, DACA advocates stress the need to lobby Congress, get more educated on the issue, promote it on social media and pray for its resolution, even joining virtual prayer rallies taking place.

Giovana Oaxaca, a government relations associate with Catholic social justice lobby Network and a DACA recipient, thanked those watching the June 22 online discussion for “staying by our side in the work that lies ahead.”

“It will be difficult,” she said, “but we will keep faith and believe there is a path forward even when it appears that there is none.”