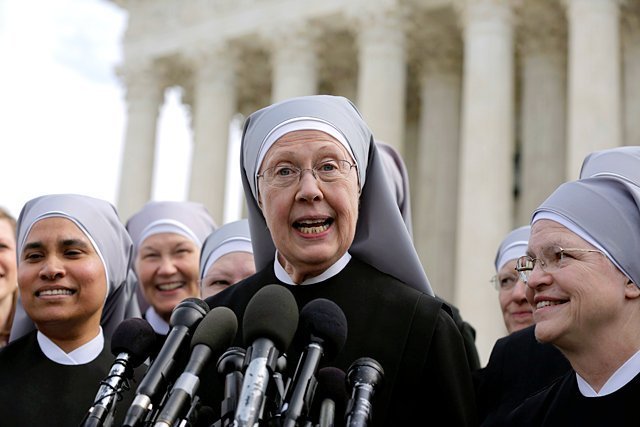 Sister Loraine Marie Maguire, mother provincial of the Denver-based Little Sisters of the Poor, speaks to the media outside the U.S. Supreme Court in Washington March 23 after attending oral arguments in the Zubik v. Burwell contraceptive mandate case.

The 108-page transcript of the arguments was gleaned for hardly obscure clues and court watchers predicted a split decision of 4-4 from the eight-member court.

And then less than a week later, that prediction became cloudy.

On March 29, the court issued an unusual order seeking additional briefs from the plaintiffs and the federal government about how and if contraceptive insurance coverage could be obtained by employees through their insurance companies without directly involving religious employers who object to this coverage.

The two-page order was given a positive spin by both sides and also seen by many as a clear indication that the court was taking extra steps to avoid an evenly split decision that would uphold the lower courts’ rulings and mean the contraceptive mandate for religious groups would be interpreted differently in different parts of the country.

The case argued before the court involves the Little Sisters of the Poor, Priests for Life, the Pennsylvania dioceses of Pittsburgh and Erie, and the Archdiocese of Washington and other religious groups challenging the Affordable Care Act’s mandate that most religious and other employers must cover contraceptives, sterilization and abortifacients through employer-provided health insurance.

These groups, who do not fit the narrow exemption to the contraceptive mandate given to churches, argue that providing contraceptive coverage even indirectly through a third party, as the Obama administration allows through what it calls an accommodation, still violates their religious beliefs.

In oral arguments, the discussion centered on health exchanges, grandfathered clauses and exemptions, and ways to provide seamless health care coverage. But the allotted time seemed to have left unanswered questions about other possibilities, which the court’s subsequent order is now seeking.

Mark Rienzi, lead attorney for the Becket Fund for Religious Liberty, which represented the Little Sisters of the Poor, called the court’s order "an excellent development."

He said it shows the court "understood the sisters’ concern that the government’s current scheme forces them to violate their religion." In a March 29 statement, he also said the attorneys "look forward to offering alternatives that protect the Little Sisters’ religious liberty while allowing the government to meet its stated goals."

Priests for Life also reacted confidently, saying: "We see this as a positive development."

"The court appears to be looking for a least restrictive alternative that would not burden our religious beliefs, which will ultimately mean that the government did not satisfy its burden under Religious Freedom Restoration Act," the group said.

On the other side, some groups that filed amicus briefs on behalf of the Justice Department, which is representing the Obama administration, also viewed the court’s action in a positive light.

Brigitte Amiri, senior staff attorney at the American Civil Liberties Union, described the court’s order as a twist she hadn’t expected, but she also said the request for more information could be interpreted as a recognition that "taking contraception out of health plans is harmful."

And Greg Lipper, senior counsel at Americans United for Separation of Church and State, said in a blog post that "it’s foolish to read tea leaves" in the court’s order, but he would do so anyway.

He called it "a decent sign for the government," which he said signaled that at least five justices seemed to think that the challengers’ proposed alternatives to the government’s accommodation would "harm women by preventing them from receiving seamless and convenient coverage."

"If the court thought that those other alternatives were sufficient, then it wouldn’t be looking for a way to ensure that women retained accommodation-style seamless coverage," he added.

Vivian Hamilton, a law professor at William & Mary Law School in Williamsburg, Virginia, told Catholic News Service that although she would be careful about "reading too much into the justices’ request for more information," it did seem to suggest that they are "considering whether an accommodation might be crafted that would both permit the government to meet its compelling interest in ensuring that women have the ability to obtain contraceptive health coverage yet also respect religious employers’ objection to participating — even indirectly — in the provision of such coverage."

Another interpretation, from legal analyst Lyle Denniston, who writes for www.scotusblog.com, a blog on the Supreme Court, said the specific wording of the court’s order makes it seem that the justices have accepted, even if tentatively, the views of both sides.

If lawyers representing religious employers and the government do not come up with satisfactory answers to the order, Denniston said the justices will have to make their decision based on the oral arguments.

And if that’s the case, the decision could very well hinge on the word "hijack," which was used seven times in the 94 minutes of oral arguments to refer to the plaintiffs’ arguments the government was "hijacking" insurance plans to make religious groups provide contraceptive coverage against their will.

"The petitioner has used the phrase ‘hijacking,’ and it seems to me that that’s an accurate description of what the government wants to do," Chief Justice John Roberts told U.S. Solicitor General Donald Verrilli Jr.

Justice Anthony Kennedy, whose vote everyone is looking at in this case, also picked up on the hijacking theme. When Verrilli explained that it was necessary to include contraceptive coverage in employer health plans instead of in a separate plan, Kennedy said: "That’s why it’s necessary to hijack the plans."

Kennedy sided with the majority in the 2014 Hobby Lobby ruling when it said family-owned companies run on religious principles could object to the contraceptive coverage requirement in the Affordable Care Act for religious reasons.

In the March 23 argument, Kennedy questioned whether it would be difficult for the government to arrange alternative access to contraceptive coverage that would not force religious groups to be complicit.

"If it’s so easy to provide, if it’s so free, why can’t they just get it through another plan?" he asked.

For now, it’s back to the drawing board for both sides to come up with more answers.

And the only clear signal is that a decision on this case is not likely to come down soon, especially with the extra homework for both sides; it will likely be released near the end of the term in late June.