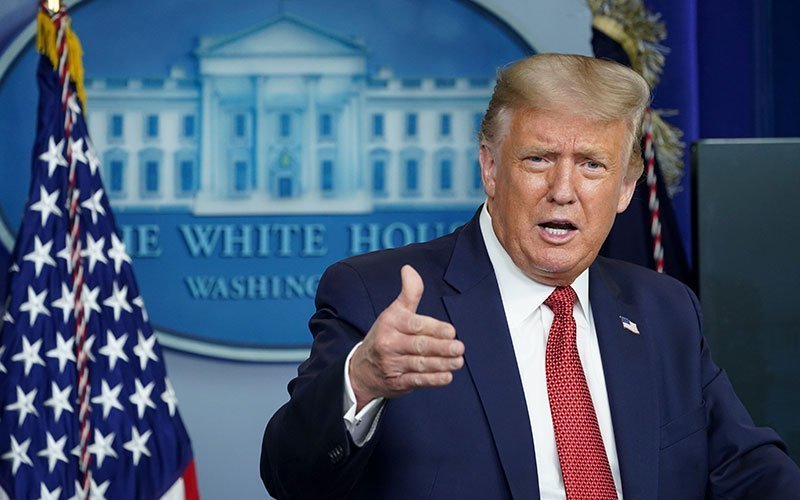 CLEVELAND (CNS) — The coronavirus relief measures put in place by President Donald Trump Aug. 8 are not expected to provide significant relief to people most in need of assistance because of the pandemic-induced recession, political observers said.

While rooted in law, they explained, the steps undertaken by the president are limited in scope and some may face court challenges because they upend the taxing and budgetary mandates explicitly given to Congress by the Constitution.

Trump’s actions in a trio of memoranda would postpone payment of federal payroll tax, offer new unemployment benefits, and seek to protect renters and homeowners from eviction. A fourth measure, outlined in an executive order, extends the deferral on the payment of federal student loans, but not privately issued loans.

Critics in Congress, business, education, the legal field and some state governors have argued that Trump’s orders are legally suspect and fiscally unsound.

John K. White, professor of politics at The Catholic University of America, described Trump’s effort as an “illusion of progress.”

Trump said he acted after negotiations between Democratic congressional leaders and the White House on a new federal emergency pandemic relief collapsed Aug. 7. Another aid bill is widely seen as necessary because several measures in earlier legislation, such as the $600 a week unemployment insurance payment, expired July 31.

The bill would succeed the Coronavirus Aid, Relief and Economic Security Act, or CARES Act, which prevented millions of Americans from falling into poverty as the coronavirus began spreading nationwide in spring.

“These orders sounded more important than they turned out to be in practice,” Boris Heersink, assistant professor of political science at Fordham University, wrote in an email to Catholic News Service.

Heersink and others raised concern that the payroll tax deferment would benefit only those people who continue to work and would do little to aid the 30 million workers who remain off the job because of the pandemic.

“You’re talking about millions of unemployed people who are not going to feel any tax relief from that executive action. You look at that and say it’s unlikely to contribute to an economic rebound,” White explained.

Trump’s plan to defer the payment of payroll taxes from September until January for workers earning $104,000 or less annually means that people eventually still will have to pay them. The 6.2% payroll tax supports entitlement programs such as Social Security and Medicare.

The president said at a signing ceremony at his golf club in Bedminster, New Jersey, that if he were to be reelected he would forgive the amount of back taxes owed by workers and seek to implement a permanent tax cut.

However, Republicans and Democrats in Congress have long opposed any such tax deferment or permanent tax cut related to Social Security and Medicare, which are already facing critical long-term funding shortfalls.

Michael Moreland, director of the Eleanor H. McCullen Center for Law, Religion and Public Policy at the Villanova University law school, told CNS that while the president’s ability to defer tax payments is defined in law, Trump’s action “does not cancel the obligation (of businesses) for collecting the taxes.”

“It puts the employers in a difficult situation. They’ll continue withholding in order to reconcile (with the government) once the deferment is lifted,” said Moreland, who worked on the domestic policy staff in the White House under President George W. Bush.

At Catholic Charities USA, Anthony Granado, vice president of government relations, sees the possibility of deferring payroll taxes as not “having much of an impact on us or the (diocesan) agencies.”

Meanwhile, Trump’s plan to provide $400 a week to people who remain out of work met with broader approval from observers. Still, they questioned whether the program would achieve its goals for more than a few weeks.

Under the action, the federal government would provide $300 per week while states would kick in an additional $100 per week. The amount is on top of current unemployment insurance payments. In many parts of the country governors said their states could not afford the additional payment.

“There’s two important issues with the state part of it. One is whether or not the state could afford it and whether or not the states would do it if they could. Those two things make it unlikely that states were going to fully comply,” said Jim Sullivan, professor of economics and co-founder of the Wilson Sheehan Lab for Economic Opportunities at the University of Notre Dame.

Moreland again described Trump’s plan for unemployment benefits as “tricky” because of the dire financial conditions facing the states. He was unsure states will accept the federal funding because they “have to request the aid and kick in the other quarter.”

States not seeking the funds, however, would be “in a tough spot, saying ‘we’re not going to ask for relief for people facing unemployment,'” Moreland said.

Sullivan added that states will have to establish a new program to disburse the funds.

“It’s going to add another layer of complexity. Even if states were able and willing to comply there might be considerable delays in getting these payments out,” Sullivan told CNS.

Some state officials, such as Ohio Gov. Mike DeWine, said they would accept funds to implement the $300 payments alone, a step Trump said was possible.

Using funds earmarked for disaster response could face a legal challenge on constitutional grounds from Democrats in the U.S. House, who maintain that only Congress can set budgets and amend how funds are spent.

Trump’s executive actions on the eviction moratorium hold greater promise. But observers noted the language in the president’s memo only asks the secretary of the Department of Health and Human Services and the director of the Centers for Disease Control and Prevention to “consider” what steps they can take to keep people in their homes.

An eviction moratorium put in place by earlier legislation after the pandemic emerged has expired, leaving people unable to make rent or mortgage payments vulnerable to being forced out of their homes at present.

Catholic Charities USA’s Granado said the moratorium is necessary to prevent people from becoming homeless. The agency, he said, has pushed for a new moratorium in the bill currently being negotiated.

“We have been asking for a moratorium off at least a year. If the administration can support that in some way or help strengthen that, that would be great,” Granado said.

The executive order on students loans has proven to be the least controversial of all the actions Trump took. It applies only to federal student loan borrowers and simply delays payment rather than forgive the loan entirely, Heersink explained.

“The order excludes private loans,” he said, “so people who have student loans not through the federal government still have to pay.”