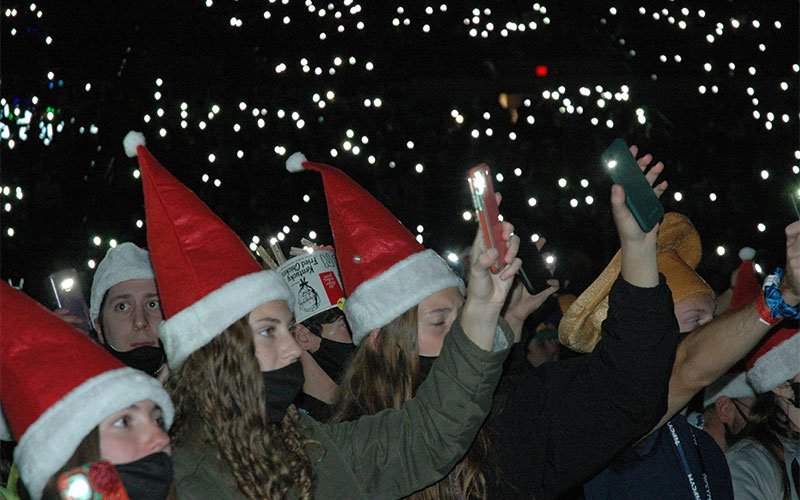 Youth from across the country are seen Nov. 18, 2021, during Grammy-winner Lecrae's performance at the opening session of the National Catholic Youth Conference at Lucas Oil Stadium in Indianapolis. (CNS photo by John Shaughnessy/The Criterion

INDIANAPOLIS (CNS) — Each National Catholic Youth Conference is unique, but perhaps none more so than this year’s due to the COVID-19 pandemic.

There was much to consider. From determining safety measures to deciding whether the event would happen at all, the staff of the National Federation of Catholic Youth Ministry, which organizes the event, was even busier the past two years than normal.

The Criterion, newspaper of the Indianapolis Archdiocese, spoke with Christina Lamas, the federation’s executive director, to discuss the effects of the pandemic on planning and conducting this year’s NCYC, and any changes that might be seen in the future.

“Safety is a number one priority for the organization,” said Lamas. “Not just having a safe environment, but that we provide an opportunity for young people to walk in and know they are taken care of, and for their parents to know that we’re taking care of them.”

That’s why several factors went into determining whether to have the event and, once the decision to go forward was made, identifying what safety measures would need to be put in place.

“We were constantly having conversations with health care professionals and conference industry experts,” Lamas said.

The organization announced in January that the event would take place, but the decision was not final.

“We were advised not to make any final decisions until we got closer to the event simply because, as we were living through a pandemic and still are, things were always changing day by day, minute by minute,” she explained.

“When we opened registration in May, the trend nationally seemed to be going fairly good. We saw a lot of restrictions being removed, parts of the country opening up, travel beginning to happen, so it was a very good prognosis.”

More safety decisions needed to be made as the event drew near, decisions about face masks and how to assure participants were COVID-19-free before coming to the event.

“There were multiple factors that went into the decision,” said Lamas. “We had to make sure the environment was safe, yes, but also security, the number of participants, what activities we would and wouldn’t offer.

“So all of the program aspects, plus the building and personnel, all of that went into the criteria of making the final decision of whether or not NCYC would take place and how it would look if it did.”

Of course, prayer was part of the process in discerning the right and best path forward.

“God has ways of working,” Lamas said with a smile. “Problems would come up, and conversations with health professionals and others in the conference industry. We kept moving forward in faith. The unknown became known, so we kept walking in faith that God would provide. And here we are!”

One major decision affecting the look of NCYC this year was the determination to limit the number of participants to half of the normal 20,000. Including young people and all those contributing behind the scenes, the number participating this year was nearly 11,000.

All were required to submit either proof of receiving the COVID-19 vaccine or results showing a negative COVID-19 test result within 72 hours of the event.

Face masks also were required to completely cover both nose and mouth. Volunteers offered gentle reminders when spotting a mask dangling from an ear or tucked under a chin.

This year, the National Federation of Catholic Youth Ministry also offered a virtual NCYC. While the numbers fluctuated through the course of the livestreamed event, Lamas said the average number of virtual participants was about 2,000.

While NCYC might have looked different in terms of numbers and safety measures this year, Lamas noted that every NCYC is unique.

“It’s the first NCYC for everyone attending this year,” she said. “Whether it’s their first or second or 10th, we’re all experiencing for the first time this NCYC. Things may be different, but God’s spirit is the same. The energy, the joy, the smiles, those encounters, those haven’t changed.”

As for the future, Lamas noted COVID-19 might have an effect on the event, but in a positive sense, such as “thinking outside the box,” she said.

“We all had to think and stretch ourselves like we’ve not done before. I think you’ll see a lot of innovation and creativity here forward — I think the pandemic sparked that in all of us,” she added. “But the spirit of NCYC will remain.”

Hoefer is a staff writer at The Criterion, newspaper of the Archdiocese of Indianapolis.