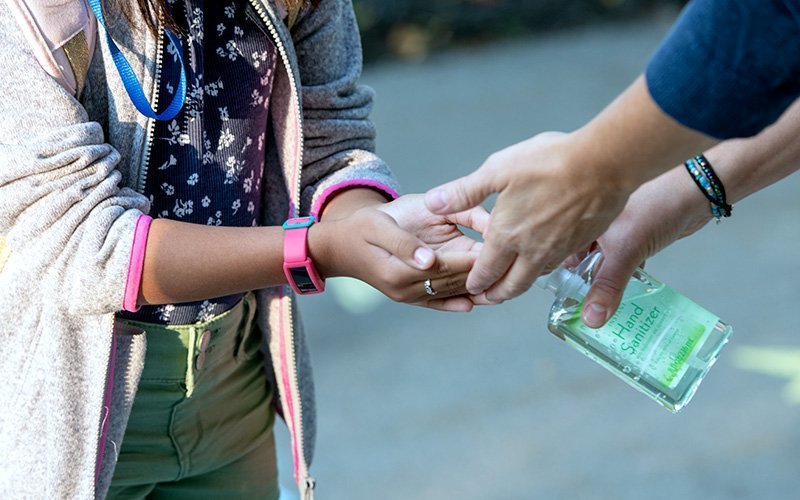 A Seton Catholic School student receives a squirt of hand sanitizer upon arriving at the Brighton school Sept. 9. New York state is now requiring Seton and eight other Catholic schools in Monroe County to test 20 percent of their students, staff and teachers for COVID-19 each week.

Nine of the Diocese of Rochester’s Catholic elementary schools are within the boundaries of the new COVID-19 yellow precautionary zone designated Nov. 9 by Gov. Andrew Cuomo, and, as such, must participate in weekly testing of 20 percent of the students, staff and teachers. These tests will be conducted on school grounds using rapid testing kits, according to a Nov. 9 letter to Catholic-school families from James Tauzel, superintendent of diocesan Catholic schools.

The following diocesan Catholic schools are within the yellow precautionary zone:

Most of Monroe County is within the yellow precautionary zone, and similar micro-cluster focus areas also have been established in Erie and Onondaga counties. The yellow zone designation brings with it certain restrictions, such as a 25-person cap on all indoor and outdoor gatherings. Elsewhere in the state, other areas with higher percentages of positive cases of COVID-19 have been designated as orange and red zones. The red zones have the tightest restrictions, according to a press release from Cuomo’s office.

“The red, orange and yellow zones are our way of saying the virus is making headway and we’re going to increase restrictions and we’re going to increase enforcement. When we see a small increase, we attack that small increase — and the numbers show it works. If we stay smart and disciplined we can manage this, but it will take all of us being New York tough,” Cuomo said during a Nov. 9 press conference.

Each of the Rochester Diocese’s Catholic schools will designate a site administrator for testing, and that person will be trained and equipped to administer the tests, Tauzel said in his letter. Twenty percent of each school’s total population, including students, teachers and staff, will be tested each week.

The form of testing that will be used in the schools is much less invasive than the standard test used to diagnose COVID-19, according to Tauzel’s letter. Nonetheless, the superintendent acknowledged that families may have concerns about having their children tested at school.

“We also note that our willingness to participate in these mandates ensures that our schools can remain open and that our local officials can better analyze and respond to the needs of our local community. However, understanding that some families may have concerns regarding having your child(ren) tested, we ask you to proactively reach out to your school principal and we will address your concerns on a case-by-case basis,” Tauzel said in the letter.