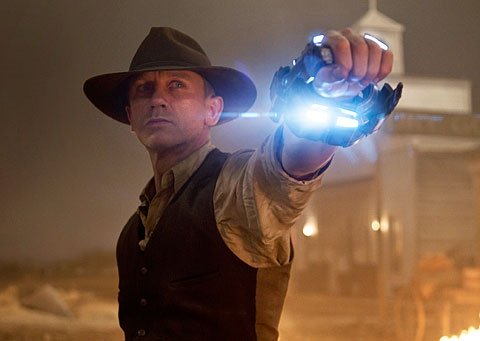 NEW YORK (CNS) — When aggressive extraterrestrials attack a ramshackle 19th-century frontier village in "Cowboys & Aliens" (Universal), the hopelessly outgunned townsfolk are — not surprisingly — perplexed. "Who are these celestial invaders, armed with machines that can fly," they seem to wonder, "and why are they interrupting our Western?" While judgments may vary as to the aesthetic success of this experiment in genre bending, this much can be said with certainty: Interludes of harsh violence, ranging from brutal fistfights to more high-tech mayhem, restrict the appropriate audience for director Jon Favreau’s adaptation of Scott Mitchell Rosenberg’s graphic novel.

So, too, do some tacked-on but dubious theological trimmings. These come courtesy of the two-bit burg’s resident preacher, Meacham (Clancy Brown).

Though the filmmakers have done enough research to create an atmospheric, if downbeat, evocation of the Old West, their inquiries — or, perhaps, the original author’s — do not seem to have extended to the Protestantism that prevailed amid the tumbleweeds. That much becomes clear when Meacham talks, incongruously, of granting "absolution" to another character.

That term, if it had meant anything to a minister of Meacham’s ostensible stripe, would have been exclusively associated with the Catholic clergy, and therefore with the supposed "errors" of the Church of Rome. Yet Absolution, we learn, is also the name of the very town Meacham shepherds.

In the same conversation, Meacham seems to suggest that being true to ourselves is more important than following God’s plan for us, though his phraseology — as supplied by no fewer than five credited screenwriters — is too diffuse to pin down precisely.

On the receiving end of Meacham’s discourse is one of the two flawed heroes of the piece, ex-outlaw Jake Lonergan (Daniel Craig), a man who — as it develops — could certainly afford to be well shriven. At the moment, however, Jake can remember nothing of his past, sinful or otherwise, because he’s just back from an alien abduction that left him with a bad case of amnesia and a strange bracelet on his wrist.

When the unwanted visitors follow up their rough treatment of Jake with the aforementioned assault on the local community — during which they also kidnap numbers of its citizens by lassoing them onboard their passing spaceships — a posse is formed to pursue these inexplicable adversaries and rescue their victims.

Jake is joined, at the head of this hunt, by ruthless local cattle baron Woodrow Dolarhyde (Harrison Ford) and by mysterious stranger Ella Swenson (Olivia Wilde), who seems to know more than she’s saying.

As the motley crew under their command gradually unites, both Jake and Dolarhyde show the better sides of themselves, returning us to the theme of reform and redemption.

Second chances have always accompanied westward expansion, at least onscreen So it’s not surprising, perhaps that the sometimes clever, but ultimately unsatisfying "Cowboys & Aliens" works much better, in the end, as a campfire tale than as an intergalactic showdown.

The film contains intense, sometimes gory violence, including torture, brief partial nudity, ritual drug use, about a half-dozen uses of profanity, as well as a few crude and some crass terms. The Catholic News Service classification is L — limited adult audience, films whose problematic content many adults would find troubling. The Motion Picture Association of America rating is PG-13 — parents strongly cautioned. Some material may be inappropriate for children under 13.