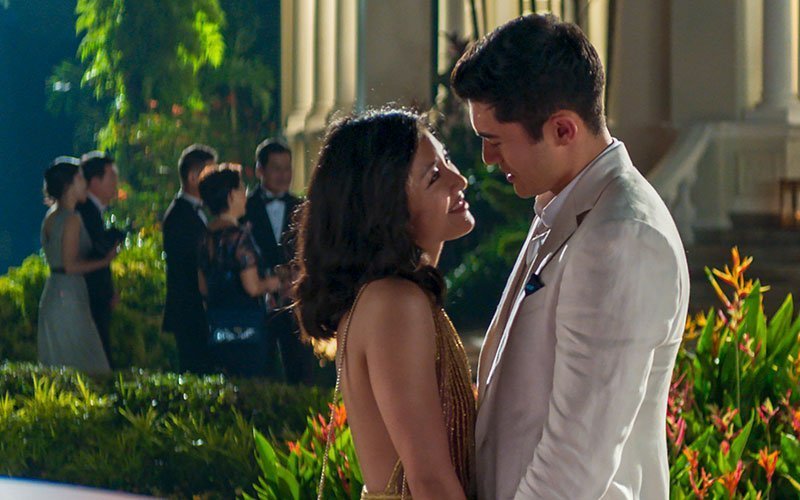 Constance Wu and Henry Golding star in a scene from the movie "Crazy Rich Asians." (CNS photo by Warner Bros.)

NEW YORK (CNS) — The award for the most accurate film title of the year goes to “Crazy Rich Asians” (Warner Bros), a romantic comedy about, well, members of a certain ethnic group who are insanely wealthy.

They are also, at times, out of their minds.

Unfortunately, what should be a zany romp based on the popular novel by Kevin Kwan is a surprisingly pedestrian affair, directed by Jon M. Chu (“Now You See Me 2”). Instead of a compelling story with well-developed characters, the film is a dreary Cinderella retread, enlivened only by its good-looking cast, exotic locales and an eye-popping smorgasbord of uber-expensive stuff.

Cinderella in this instance is a go-getter named Rachel (Constance Wu), an economics professor in New York City. Her longtime boyfriend, Nick (Henry Golding), is an all-around regular guy (or so he seems).

Nick’s best friend is getting married in Singapore, and Nick suggests to Rachel that they attend and take the opportunity to also meet Nick’s family.

Unbeknown to Rachel, Nick is planning to pop the question. She’s also unaware that he’s the scion of one of the wealthiest families and a much-sought-after bachelor.

“You really should have told me you’re like the Prince William of Asia,” Rachel says.

“That’s ridiculous,” Nick replies. “I’m much more of a Harry.”

Once in Singapore, Rachel finds herself the target of scores of jealous ladies, not to mention Nick’s disapproving mother, Eleanor (Michelle Yeoh).

As matriarch, Eleanor is a bastion of tradition and a passionate defender of her extended family. Intriguingly, she is first shown reading from the Bible, leading her Methodist Christian friends in a study group. “Set your minds on things that are above, not on things that are on the earth,” she says, quoting Colossians 3:2.

Clearly, Eleanor does not practice what she preaches, and is determined to prevent her beloved son from marrying for love — and so far beneath his station.

The stage is set for a showdown between the Old World and the New, with Rachel getting much-needed support from her ditzy girlfriend (and dresser), Peik Lin (Awkwafina).

“Crazy Rich Asians” follows a predictable path towards a schmaltzy conclusion worthy of a Disney princess, albeit one gussied up with a lot more bling.

The film contains an implied pre-marital relationship, some sexual humor, mature themes, and a handful of profane and crude oaths. The Catholic News Service classification is A-III — adults. The Motion Picture Association of America rating is PG-13 — parents strongly cautioned. Some material may be inappropriate for children under 13.