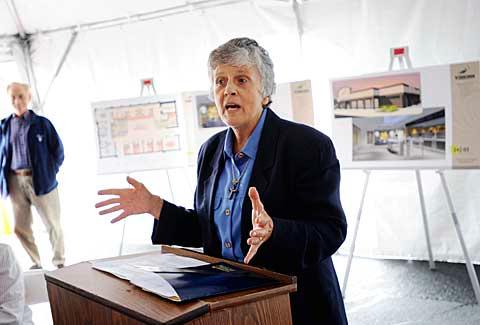 When Sister of St. Joseph Beth LeValley sought a potential organization to take over Progressive Neighborhood Federal Credit Union, she was hoping to find one that might maintain the credit union’s mission and vision: helping Rochester residents in need to work their way to financial self-sufficiency.

The credit union’s programs had years of success with credit-building and financial-literacy programs, but the economic recession decimated the finances of the credit union industry as a whole, and Progressive members in particular.

"The economy faltered, and it hurt our members first," Sister LeValley said. "They lost jobs, they lost second jobs and they lost hours."

The credit union teetered on the brink of liquidation as its board and Sister LeValley searched for a local credit union to acquire Progressive. It appeared the credit union was going to close in February 2010, but then several credit unions in the state emerged to express interest in acquiring it.

Sister LeValley said she was relieved and reassured when Frank Berrish, president and CEO of Endicott-based Visions Federal Credit Union, agreed to keep the branch, name, staff and mission — and he asked how he could enhance the credit union’s financial-education and credit-rebuilding programs. He then incorporated Sister LeValley’s lengthy response into a step-by-step execution plan.

"Progressive Neighborhood is probably one of the best models I’ve seen with its rising star program and the Progressive Way to Better Credit," Berrish said, referring to two financial-education and credit-building programs offered at the branch at 1130 E. Main St., Rochester. "We’re learning from them."

On Sept. 16, Sister LeValley and founding members including Rosa Wims and a host of credit union board members led a crowd of friends and supporters in singing "We’ve Come This Far By Faith" as they cut the ribbon symbolizing the new start of Visions Federal Credit Union’s Progressive Neighborhood branch.

The event included a reception featuring barbecue and corn bread made and served by Betty Smith, who received loans from Progressive that allowed her to start a small business marketing "Miss Betty’s Downhome Sauce" and purchase a van for her business. Smith works at the Sisters of St. Joseph Motherhouse and accepts select catering jobs, but said she always will say yes to the credit union that gave her multiple loans and has continued to sell her sauce over the years.

"(The credit union is) a life saver," Smith said. "It taught me so much about being conscious about spending money."

Berrish noted that the new partnership will allow his credit union to enhance the services offered at the branch. Members will now have access to low or no down-payment mortgages, credit-building options, small business loans, trust services, and online and mobile banking services.

The Progressive Neighborhood branch will even be the only Visions branch to offer a new type of savings account that pays 4 percent interest up to $500, allowing a person with scant resources to begin saving.

The interior of the branch will be renovated, and the rising star theme, which honors the credit union’s community supporters, will be incorporated into the décor. Sister LeValley noted that the branch’s most recent rising star was the late Hispanic businessman Ed Navarro, who was active with St. Pius Tenth Parish. His wife, Beth, accepted a Rising Star Award at the reception.

Sister LeValley said she will stay on for a year at the credit union to aid in the transition. She said plans are being made to offer programs that will give people incentives to begin saving toward homeownership.

Volunteers are needed to help at the credit union, and new members are being sought. Anyone who lives, works, worships, goes to school or regularly conducts business in most of the City of Rochester may qualify to be a member.

Board member Marilyn Tedeschi of the Community Microenterprise Center said when the credit union was just beginning, she and Sister LeValley dreamed of a day when a larger credit union would help them.

"This is a dream come true," Tedeschi said. "We could not have asked for anything more."