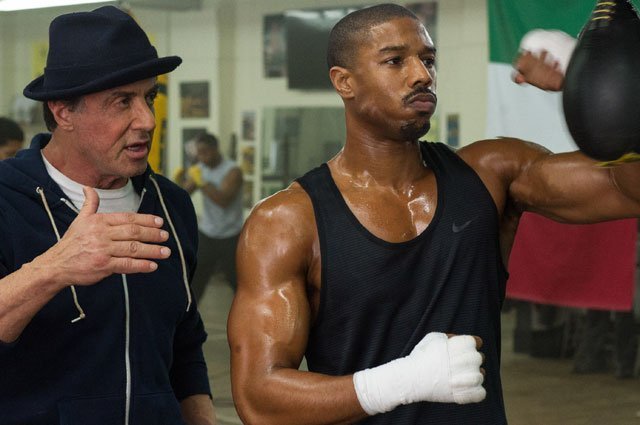 Sylvester Stallone and Michael B. Jordan star in a scene from the movie "Creed." The Catholic News Service classification is A-III -- adults. The Motion Picture Association of America rating is PG-13 -- parents strongly cautioned. Some material may be inappropriate for children under 13.
By Kurt Jensen
Catholic News Service
NEW YORK (CNS) — "One step, one punch, one round at a time" is the mantra of Sylvester Stallone’s Rocky Balboa in "Creed" (Warner Bros.). This seventh "Rocky" film is an imaginative and — if you can believe it — somewhat gentle reboot of the blockbuster franchise.
The same patient motto sums up director Ryan Coogler’s approach to his task. In the screenplay he co-wrote with Aaron Covington, Coogler is wise enough to touch lightly on all the familiar notes of the 1976 original, thus reminding his audience that he respects the past even as he reinvents for the future.
Adonis Creed (Michael B. Jordan) is the illegitimate son of Apollo Creed (played by Carl Weathers; the character was killed in the ring in "Rocky IV").
Adonis is determined to fulfill his destiny as a boxer.
This resolve justifies just enough flashbacks to show that the kid had it tough in foster care and a series of juvenile detention facilities. He uses his fists instinctively. Indeed, even after being rescued from poverty by Creed’s last wife, Mary Anne (Phylicia Rashad), and despite a promising future in finance, Adonis knows he belongs in the ring.
So he abandons weekend bouts in Tijuana and the trappings of luxury in Los Angeles for training in scruffy, cold Philadelphia. His coach, of course, is the legendary former heavyweight champ, now widowed and operating an Italian restaurant.
Adonis doesn’t pummel any slabs of beef in a meat locker, but the regimen is otherwise intact: Rocky has him chasing chickens and performing one-armed pushups. Rocky even repeats the admonishment he long ago received from trainer Mickey Goldmill (Burgess Meredith): "Women weaken legs!"
Along those lines, there’s a supportive and chastely portrayed romance with Adonis’ spunky downstairs neighbor, R&amp;B performer Bianca (Tessa Thompson), who is suffering from progressive hearing loss.
The traditional montages of physical exertion and self-realization build up to the climactic bout in which Adonis is pitted against British light-heavyweight champion "Pretty" Ricky Conlan (Tony Bellew), who’s facing a prison term.
Adonis tries at first to conceal his parentage. But the fame that results when the information leaks out, after an early, decisive victory, gives him his shot at the title fight. This enables him to confront both his physical and emotional limits.
The script’s underlying message is that, no matter what the circumstances, the cherished old values of self-sacrifice and discipline can prevail. That outlook may, in the judgment of many parents, extend the movie’s appropriate appeal, making it acceptable fare for mature adolescents.
The film contains bloody physical violence and fleeting rough language. The Catholic News Service classification is A-III — adults. The Motion Picture Association of America rating is PG-13 — parents strongly cautioned. Some material may be inappropriate for children under 13.
– – –
Jensen is a guest reviewer for Catholic News Service.
Copyright © 2022 Catholic News Service, Inc. All rights reserved. Linking is encouraged, but republishing or redistributing, including by framing or similar means, without the publisher's prior written permission is prohibited.