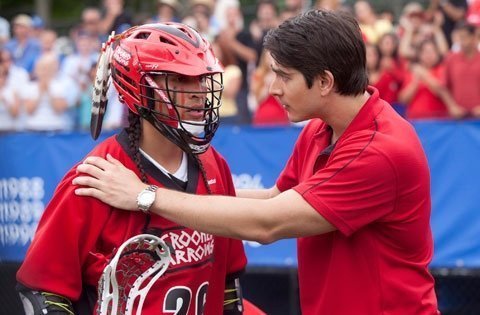 NEW YORK (CNS) — America’s fastest-growing sport leaps to the big screen — and returns to its roots — in "Crooked Arrows" (Peck). This spirited drama follows the fortunes of a Native American lacrosse team and its flawed manager — who must somehow chart a path to victory and redemption.

Director Steve Rash ("The Buddy Holly Story") reminds viewers of the origins of the sport, first played by Native Americans a thousand years ago. At that time, lacrosse was viewed not just as a diversion, but as a way to honor the Creator and foster tribal unity.

Flash-forward to a Native American reservation in New York State today, and "Crooked Arrows" takes a page from "The Bad News Bears" and "The Mighty Ducks" to convey lessons in sportsmanship, discipline, and tolerance, despite the obstacle of some childish locker-room humor.

Joe Logan (Brandon Routh) runs the sleazy "Lucky Indian Casino" on the Sunaquot Reservation. Half Sunaquot, he is resented by his people for his ambition and worldly ways (his license plate reads "WAMPUM").

The casino wants to expand, and Joe needs the approval of the tribal council, headed by his estranged father, Ben (Gil Birmingham). Dad sees this as an opportunity for Joe to reconnect with his heritage. So he places a condition on the casino expansion: Joe must return to the reservation and coach the high school lacrosse team and, as Ben says, "restore pride to our game."

Good thing Joe is a former lacrosse star nicknamed "Logan the Legend." As he wrestles with a ragtag bunch of teens, he faces his own demons with the help of Crooked Arrow (Dennis Ambriz): Think tribal shaman crossed with Ann Landers.

"No arrow flies straight," Crooked Arrow proclaims. "As long as it follows its own path, it will find its way."

That path is lacrosse, which the Sunaquots called the "Medicine Game."

"Let the game heal you," Crooked Arrow tells Joe. "The spirit lies in the stick."

Soon our teen athletes join their coach in running up mountains, chanting in sweat lodges, and finding their inner animal spirits as they coalesce into a winning team.

"Crooked Arrows" includes some thrilling moments on the lacrosse pitch as it builds to a David-vs.-Goliath climax against a tony prep-school team. Along the way, the sport is presented as an extension of Native American spirituality, a metaphor for overcoming life’s challenges and prejudice.

"We all speak the same language," Joe tells his players. "We play to honor our ancestors and the Creator."

The film contains intense contact-sports violence, brief rear locker-room nudity, some sexual innuendo and a few crude terms. The Catholic News Service classification is A-III — adults. The Motion Picture Association of America rating is PG-13 — parents strongly cautioned. Some material may be inappropriate for children under 13.