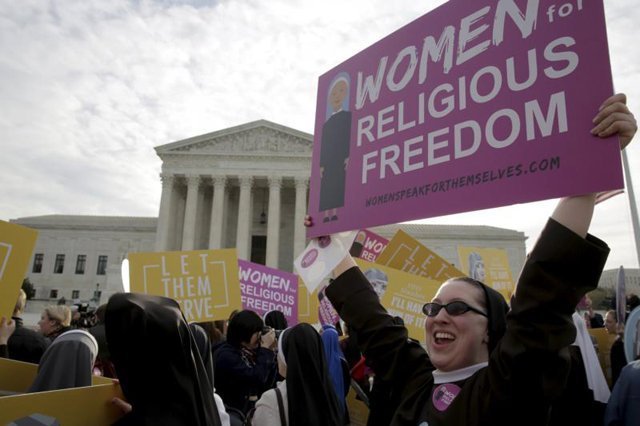 Pope Francis breathes over chrism oil, a gesture symbolizing the infusion of the Holy Spirit, during the Holy Thursday chrism Mass in St. Peter's Basilica at the Vatican March 24.

WASHINGTON (CNS) — In the end, the women religious decided it would be good to sing after all.
That wasn’t on the agenda for the sunny 90-minute rally in front of the Supreme Court March 23 in support of the plaintiffs in Zubik v. Burwell. But it
had a calming effect and sometimes even silenced a competing rally in support of the government, so it seemed like the right thing to do.
There were several spontaneous renditions of "Let There Be Peace on Earth," "God Bless America" and "God Bless the USA" from the Little Sisters of the Poor and groups of Dominican and Carmelite sisters.
On March 2, a rally of more than 3,000 participants surrounded and attempted to drown out a pro-life rally of about 200 during oral arguments on a Texas abortion law. This time, the proportions were reversed.
A competing rally organized by the National Women’s Law Center, the American Humanist Association and Catholics for Choice, among other groups, had many fewer participants than the several hundred who turned out in support of the Little Sisters and the other plaintiffs, including Oklahoma Wesleyan University, East Texas Baptist University, Southern Nazarene University and Geneva College, a Presbyterian institution, and the Archdiocese of Washington, the dioceses of Pittsburgh and Erie, Pennsylvania, and Priests for Life.
Mother Regina Marie Gorman of the Carmelite Sisters of Los Angeles, who delivered the closing prayer, announced, with a big smile, that it would be apt for all the Catholics to sing the Marian antiphon "Salve Regina," traditionally sung after evening prayers.
"Salve Regina, Mater Misericordiae" ("Hail, holy Queen, Mother of Mercy") was a serene conclusion to an orderly rally punctuated with chants of "Let them serve!" as the court heard oral arguments in the case brought by several Catholic and other faith-based entities against the federal government’s requirement that most employers, including religious employers, cover contraceptives for their workers.
The Denver-based Little Sisters, who operate nursing homes for the elderly poor, and 36 other groups are contesting the Affordable Care Act’s contraceptive mandate. With the death of Justice Antonin Scalia, the case has an uncertain future with the possibility of a 4-4 court deadlock, which means the rulings of the circuit courts, all but one of which have gone against the plaintiffs, will be upheld.
The Department of Health and Human Services has offered an "accommodation," also known as a "work-around," that allows objecting employers to acknowledge their opposition to contraceptive coverage by notifying HHS in a letter. This allows a third party to provide the coverage. The Little Sisters and other plaintiffs object to that, calling it a burden on their free exercise of religion, because they are still involved in allowing coverage they
find objectionable.
"Today the Little Sisters make their last stand," said Mother Mary Assumpta Long of the Dominican Sisters of Mary in Ann Arbor, Michigan.
"Filling out a piece of paper is not the issue. Complicity is wrong and it is wrong in itself, and the government cannot make this otherwise."
"The Supreme Court," she continued, "is not the arbiter of sacred Scriptures."
Mother Assumpta’s words were echoed inside the court, as Chief Justice John Roberts remarked of the plaintiffs, "They think that complicity is sinful."
"Our request is not uniquely Catholic or religious. It’s American," said Elise Italiano, executive director of communications for The Catholic University of America, another plaintiff.
Sister Loraine Marie Maguire, mother provincial for the Little Sisters of the Poor, released a statement that said, in part, "We find ourselves in a situation where the government is requiring us to include services in our religious health care plan that violate some of our deepest held religious beliefs as Little Sisters," she said. "We don’t understand why the government is doing this when there is an easy solution that doesn’t involve us — it can provide these services on the (health-care) exchanges."
At a special afternoon Mass for the Little Sisters at St. Peter’s Catholic Church, Archbishop William E. Lori of Baltimore struck a cautionary note in his homily: "It’s fair to say that this momentous issue of religious freedom has occupied much of our time and much of our energies," he said. But the decision is now "in the hands of God."
Archbishop Lori, who is chairman of the U.S. Conference of Catholic Bishops’ Ad Hoc Committee for Religious Liberty, was in the courtroom for the oral arguments. "For all of us, especially those of us who are not lawyers, it’s a glimpse into the complexities of the law," he said.
Reflecting on Holy Week, he added, "And so we do find rest in Jesus, even as controversies swirl around us. It’s never been easy to follow Jesus, and perhaps it never should be."
"So let us be of good cheer," he concluded. "Let us dare to hope. Let us dare to rejoice."
Copyright © 2023 Catholic News Service, Inc. All rights reserved. Linking is encouraged, but republishing or redistributing, including by framing or similar means, without the publisher's prior written permission is prohibited.