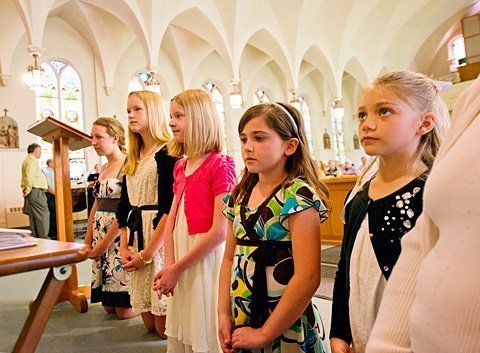 Kirstin Franzese (from left), Sarah Swinnerton, Kathleen Swinnerton, Brin Smith and Emmalise Updyke take part in a May crowning ceremony at St. Mary of the Lake Church in Watkins Glen May 5.

Watching five elegantly dressed girls march down the aisle of St. Mary of the Lake Church, brandishing red roses and a crown in honor of the parish’s patron saint, marked a turning back of the clock for Judy Scaptura.

The 86-year-old Watkins Glen resident took part in similar May crowning rites as a teenager at the same church — "I have a picture of my sister and me from 1943," she noted — and, some 70 years later, she remains involved with the annual ritual by serving as the May crowning coordinator.

Scaptura was on hand May 5 for the most recent crowning, which took place on a warm and sunny morning during St. Mary of the Lake’s 10 a.m. Mass. Immediately after Communion, the designated quintet of young ladies walked down the aisle toward a cloth-covered stand. Four of them — Emmalise Updyke, Brin Smith, Sarah Swinnerton and Kathleen Swinnerton — placed the roses in a nearby vase; then Kirsten Franzese stepped forward to gently set Mary’s crown on the stand. Later that week the crown was placed on the head of Mary’s statue — which is mounted on a church wall and not easily reachable — where it remained throughout May as part of the Catholic Church’s monthlong focus on Marian devotions and observances.

Kirsten, a 14-year-old freshman at Elmira Notre Dame High School, had taken part in three previous May crownings at St. Mary of the Lake. Despite having this experience, she admitted to being "a little nervous" due to the sizable congregation for the liturgy, which was celebrated by Father Paul Bonacci, pastor. Yet overall, Kirsten said she was "very happy" to be so closely involved in such a sacred ritual: "I think it’s amazing."

The Watkins Glen ceremony, which traditionally is held the first Sunday in May, was one of numerous May crownings that took place in parishes across the Diocese of Rochester. Crownings typically are held in early May and involve young people taking on the major roles; those chosen at St. Mary of the Lake are daughters and granddaughters of the parish’s Women’s Guild members. For instance, Kirsten became involved in the crowning because her grandmother, Vera Franzese, belongs to the guild. Another guild member, Judy Caruso, co-coordinator of the May crowning, is the grandmother of Emmalise Updyke.

Scaptura, a Women’s Guild member since 1946, is a lifelong parishioner of St. Mary of the Lake, which is part of the Schuyler Catholic Community cluster with St. Benedict in Odessa. She noted that the guild, upon its formation in 1942, took over sponsorship of the May crowning and that she’s been involved with most of the crownings since then. She added that she’d like to enhance future youth involvement in May crownings by opening up participation to all young parishioners, regardless of whether they have ties to the Women’s Guild. Scaptura said participants can be as young as 6 or 7 years old — "as long as they’re old enough to understand what they’re doing" — and go up through high-school ages.

Scaptura noted that "the girls seemed to be excited" May 5 — which was just how she remembers her experiences with May crownings many years ago.

"Well, I’ll tell you, it was always a special occasion. We were always very excited; all the girls were. Having that feeling of going up the aisle, it was very special," said Scaptura, recalling that she and other young women would wear long gowns.

Scaptura added that the enthusiasm level is high throughout the parish: "Everybody looks forward to it." Kirsten, meanwhile, said she received several comments from parishioners after the Mass "that we did great and we looked good."

Caruso observed that having youths involved in such a special tribute to the Virgin Mary underscores "the importance of children honoring the Blessed Mother." Kirsten, for one, said she plans to continue being a part of the May crownings throughout high school.

"It shows that I’m into my faith and shows that I practice it," said Kirsten, who also has assisted with teaching faith formation in her parish. "It shows how the kids are involved in the church and that we’ll participate in things we’re asked to do."