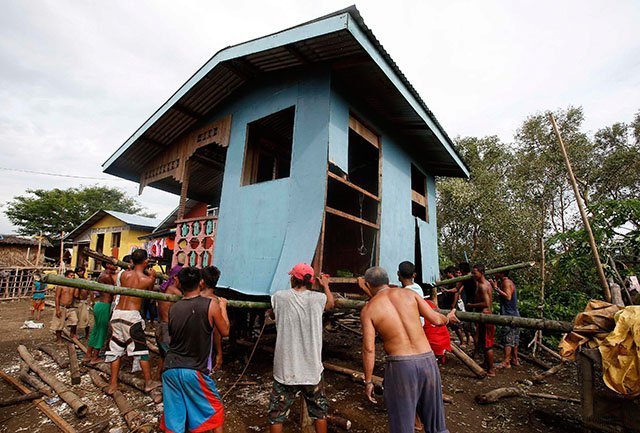 Residents lift a house July 17 damaged by Typhoon Rammasun, locally named Glenda, in a coastal village in Batangas, Philippines. Catholic Relief Services teams were fanning out to affected areas after Typhoon Rammasun propelled its way across the northern half of the Philippines, leaving at least 40 people dead and destroying more than 26,000 houses.

"People realized, ‘Oh yes, we are staying in a risky area. We’re staying in a tent or shelter that’s not very sturdy,’" said Elizabeth Tromans, the Manila-based regional emergency adviser for Catholic Relief Services. "And I think people were quite willing to go into the safe areas that had been identified."

CRS teams were fanning out to affected areas in mid-July after Typhoon Rammasun propelled its way across the northern half of the Philippines, leaving at least 40 people dead and destroying more than 26,000 houses.

Tromans said the agency was assessing the Bicol region, about 250 miles southeast of Manila, where Rammasun first made landfall. She said CRS’ local partners had reported people had been moved into evacuation centers.

"And then for Quezon (province), we’re struggling to get more information. We haven’t been able to get in touch with people there. We’re thinking some of the cellphone (towers) are down," she told Catholic News Service July 17.

Rammasun was the most powerful storm to slam the Philippines after Typhoon Haiyan cut a path of destruction across the central part of the country last November, killing 6,300 people.

Rammasun affected more than a million people with winds that peaked at 115 miles per hour, knocking out power in 13 provinces and three cities. Broken trees littered streets and crumpled cars beneath them in the Manila capital region. Four of the capital region’s 16 cities and several provinces experienced floods.

Several calls to Caritas Philippines officials were not answered.

Tromans said CRS made storm preparations a day before Rammasun was expected to touch land. She said it "seemed like it was much easier" for her colleagues to move people out to evacuation centers this time around, compared to how "difficult" it was before Haiyan struck.

Parts of Samar province, just south of Bicol, were also affected by Rammasun. Haiyan’s first target was Eastern Samar, and Tromans said CRS was especially paying attention to the rebuilding efforts in the Haiyan-devastated areas.

"This is a reminder that typhoon season and monsoon season is upon us. … We are looking at those still in makeshift shelters and really trying to prioritize those within our shelter projects … looking at the infrastructure … and really keeping the training going on ‘building back better.’

"We’re really trying to prioritize those most at risk ahead of the storm season," she said.