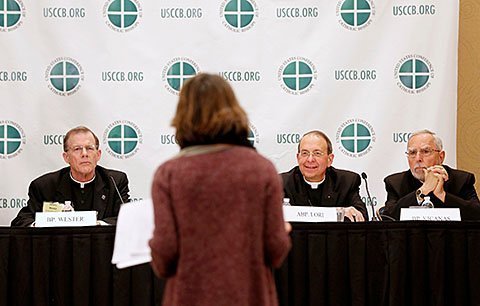 BALTIMORE (CNS) — Strong partnerships with secular and government organizations are vital in the delivery of humanitarian services around the world, the chairman of the board of Catholic Relief Services told the fall general assembly of the U.S. Conference of Catholic Bishops.

Bishop Gerald F. Kicanas of Tucson, Ariz., explained to the bishops that humanitarian work is more effectively achieved when organizations — church-based and secular — work together.

"Humanitarian efforts are different than partnerships in U.S.," Bishop Kicanas said Nov. 11 in response to a question from Archbishop Joseph F. Naumann of Kansas City, Kan. "Most of our partners are church partners.

"To do humanitarian work, it’s important to form partnerships. Sadly, they do not know or carry out teachings of the church," the Tucson bishop said. "Nevertheless, it’s important in order to do humanitarian work around the world that we partner with organizations that are not heeding our teachings but only on projects that are clearly only within the bounds of our teaching," he said.

The bishop said partnerships are carefully vetted before they are finalized to assure that what work is covered is in line with Catholic teaching.

"As we have talked with moral theologians, there is serious attention to that issue and we are keeping to our moral principles with the partnerships that we do form," Bishop Kicanas added.

CRS has come under fire in recent months from a small group of well-funded organizations that have accused the agency of engaging in health practices in violation of church teaching, like its prohibition on artificial birth control.

Carolyn Woo, CRS president, told the assembly that while the agency would like to reduce the amount of federal government money it receives, it is not possible to end its relationship with the government.

CRS has received government funds for humanitarian services almost since its first days when it helped resettle refugees from Europe during World War II, Woo explained.

"The government should help the poor. They have a responsibility," she said.

At the same time, Catholics should share in that effort, Woo added.

"We’re fighting the religious freedom issues. We want the right to provide the services according to our own mission guidelines. We don’t want to be eliminated because of that."

The bishops also received an update on rebuilding efforts in Haiti. A six-minute video reviewed some of the construction and human development work funded by the $80 million contributed by parishioners in the U.S. in the months after a January 2010 earthquake devastated a large part of the Caribbean country.