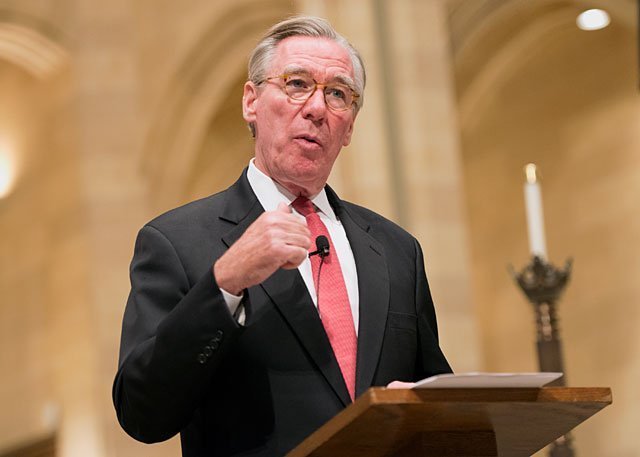 ROCHESTER — A pharmacy in Olympia, Wash., loses its court challenge to a state law requiring the owners to violate their religious beliefs by supplying emergency contraceptives.

A Colorado court cites discrimination in ruling against a baker who refused to make a wedding cake for a same-sex couple.

These recent cases reflect a decreasing ability for people in this country to exercise their constitutional right to religious freedom, asserted John Garvey, president of Catholic University of America in Washington, D.C.

"This political and cultural climate has become increasingly hostile toward people of faith," Garvey, one of the nation’s leading scholars on religious liberty, told a gathering of approximately 300 people during his presentation, "The New Religion Wars." He spoke at Sacred Heart Cathedral Sept. 15 for the second-annual Catholic Courier Lecture.

Garvey described a trend of increasingly coercive actions toward those who, because of their religious beliefs, refuse to submit to the established order — even though, he said, our nation’s founding fathers emphasized the freedom to practice such beliefs.

He acknowledged that the religious-freedom concerns in the United States don’t equate to the violence perpetrated against people of faith in several others countries, where the faithful pay for their religious beliefs in bloodshed. Nor, Garvey said, does the American situation match the loss of life among early Christian martyrs by decree of the Roman emperors.

Yet Garvey noted that the root causes of such circumstances are similar and — amid declining percentages of Christians and growth in the numbers of "Nones," or those with no religion at all — that he foresees greater potential problems ahead.

Garvey encouraged his audience at the cathedral to stick to their religious convictions in the face of powerful opposition, saying, "If we want not only to win religious liberty battles but to convert our secular culture, we need to commit to living out the Gospel with the same zeal shown by the Christians in the early church."

He said the best modern-day example of such zeal has been exhibited by the Little Sisters of the Poor in their protest of the Affordable Care Act’s contraception mandate for employers. In Zubik v. Burwell— commonly known as the Little Sisters of the Poor case, which Catholic University of America joined as coplaintiff — the U. S. Supreme Court unanimously voted May 16 to return the case to the lower courts.

Garvey has led Catholic University of America since 2010 and is a noted constitutional scholar and author. He recently was appointed by Pope Francis to the board of directors of the Agency for the Evaluation and Promotion of Quality in Ecclesiastical Universities and Faculties. He thus becomes the first person from the United States to serve with the agency, which was created in 2007 by Pope Benedict XVI to ensure high standards in institutes of higher learning.

Garvey writes frequently about religious freedom in his column "Faith & Intelligence," which is syndicated by Catholic News Service and often appears on the Courier’s commentary pages. His accomplishments earned him high praise from Rochester Bishop Salvatore R. Matano who introduced the speaker to his audience Sept. 15.

"I thank you profusely for all you have already done to preserve the freedom of the Catholic Church in the United States in these most difficult times," said Bishop Matano, who also is president and publisher of the Catholic Courier and El Mensajero Católico.

Garvey’s lecture was attended by numerous priests and other leaders in the Diocese of Rochester as well as community officials, Courier board members, alumni of Catholic University of America and representatives from the interfaith community.

Dr. Mohammad Rumi, interfaith-committee chair and a trustee at the Islamic Center of Rochester, said he agreed with Garvey’s comments as they relate to the struggles his Muslim brethren face in openly following their beliefs.

Rumi added that Garvey presented "a unique perspective — not only being a practicing Catholic, but also as a lawyer and president of a Catholic university."