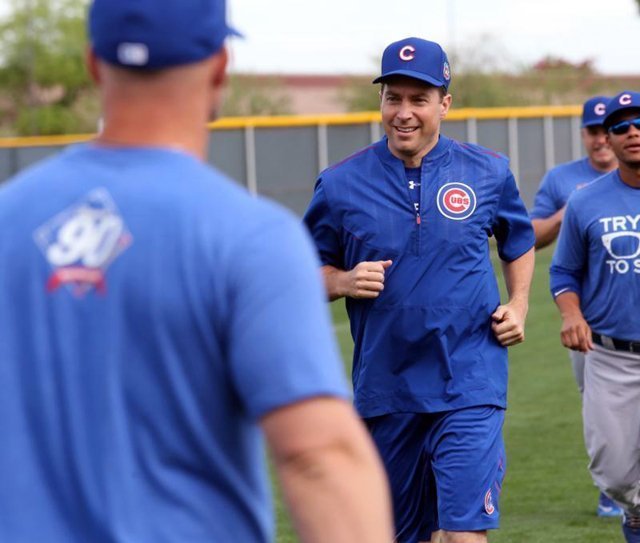 Father Burke Masters, Chicago Cubs' chaplain, takes part in a practice with players during spring training in March 2016 at Sloan Park in Mesa, Ariz. Cubs Manager Joe Maddon invited Father Masters to practice with the team.
By Joyce Duriga
Catholic News Service
CHICAGO (CNS) — When Father Burke Masters accepted God’s call to become a priest, he thought he was giving up baseball forever.
Never did he dream that God would take him back to the field — let alone as chaplain to the Chicago Cubs as they make a historic run to win the World Series, hoping to break a 108-year drought.
"Never in my wildest dreams did I think I would do this with the Cubs and be a priest," said Father Masters, who is vocations director for the Diocese of Joliet.
Four years ago, Catholic Athletes for Christ reached out to Father Masters when looking for a priest to volunteer as a chaplain for the Cubs. The goal of Catholic Athletes is to provide a network of sports-oriented clergy and laypeople to serve Catholic athletes, coaches and staff.
"Through the grapevine of priests they heard that I played baseball," he told the Catholic New World, newspaper of the Chicago Archdiocese. "The two things that I love to combine in my ministry is faith and sports, so this was a great opportunity. And having played baseball, this couldn’t get much better for me."
For the first time in 71 years, the Cubs’ ballpark, Wrigley Field, was set to host Game 3 in the World Series between Chicago and the Cleveland Indians. The series was tied 1-1 as of Oct. 28.
Before Sunday home games, Father Masters celebrates Mass at Wrigley Field for both teams, staff and those who work at the stadium. For a time, they had Mass in the family area inside the stadium, but construction moved them out to the stands in section 209. More than 30 people come to Mass before games.
Father Masters plans to approach Cubs owner Tom Ricketts to see if a chapel can be incorporated into the renovations at Wrigley Field. Some newer ballparks have nondenominational chapels inside so it’s not a new idea. The Cubs also have nondenominational Baseball Chapel chaplains who could use the space, too.
After Father Masters celebrates Mass — or during home games that don’t occur on Sundays — he goes down to the dugout and locker room and just makes himself available.
"Joe Maddon has really opened the doors for me. He told me, ‘The presence of a priest changes the environment,’" Father Masters said. Maddon also is a practicing Catholic. While with the players, Father Masters asks them if they have prayer intentions, how their families are.
"It really opens up some nice conversations. Even though they may not be attending Mass, they know that somebody is trying to care for their spiritual needs," he said.
He wears his black clerics when he’s at the park so he’s easily identifiable. As he walks through the stands, the fans often ask him if he’s praying for the team, if he blessed the players and, of course, did he get rid of the "curse." That refers to the alleged 1945 curse put on the team by Billy Goat Tavern owner Billy Sianis after the team asked him to remove his goat from the park.
Father Masters says he doesn’t pray that the Cubs win — even though he wants them to.
"What I pray for is that they all play to their ability. Honestly, I don’t think God cares who wins," he said. "If everybody plays to their ability, usually the best team wins."
Father Masters, who became a Catholic during his senior year in high school, had dreams of becoming a major league baseball player himself. He played in high school and played baseball for Mississippi State University. His team won the College World Series.
But he wasn’t drafted after college, so he pursued a business career and for a time worked for the Kane County Cougars in Geneva, a minor league affiliate of the Florida Marlins.
The call to the priesthood began to get stronger so he entered Mundelein Seminary in 1997. He was ordained for the Diocese of Joliet in 2002 and became vocation director in 2006.
This past March, when he went to Cubs’ spring training — and Maddon invited him to practice with the team — he got to live some of that baseball dream.
"It was while I was on the field — and I had tears in my eyes — that it really became clear that God was saying, ‘This was your dream but now you’re living mine.’ I had this small plan. God wanted me to be a priest and stay in baseball, which has been so humbling."
He uses this example when he talks to young people about discerning a vocation, telling them that when we’re generous with God, we can’t outdo him in generosity. "He’s going to bless us in ways we never imagined."
Father Masters has a blog at frburke23.wordpress.com.
– – –
Duriga is editor of Catholic New World, newspaper of the Archdiocese of Chicago.
Copyright © 2023 Catholic News Service, Inc. All rights reserved. Linking is encouraged, but republishing or redistributing, including by framing or similar means, without the publisher's prior written permission is prohibited.