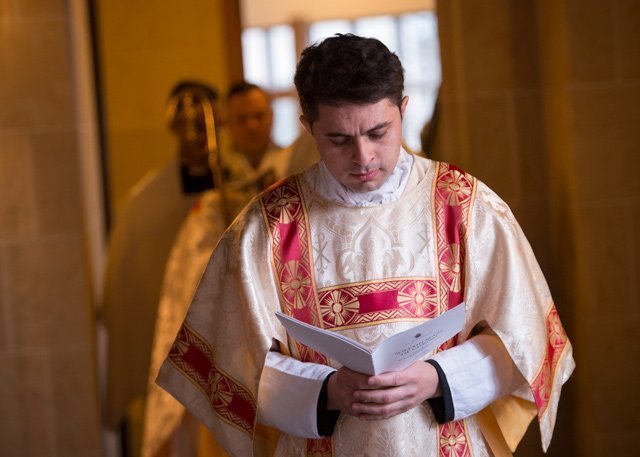 Deacon Juan Benitez processes into Sacred Heart Cathedral during the Chrism Mass April 11. He will be ordained a priest June 3.

When Aaron Kelly was in his early teens, a visiting priest gave a homily on vocations at St. Mary Our Mother Church in Horseheads. He asked for a show of hands from young men who had thought about the priesthood, and Kelly — not expecting the question — found his hand going up.

“I think it was very important at that point,” Kelly recalled. “I had already had it in my mind a long time, knowing I might have a vocation, but had never really been asked in a public way.”

He eventually wrote a letter of thanks to the priest “because it confirmed something in me. It made me think about it more.”

Diocese has 13 men training as priests

As it turned out, that thinking helped lead Kelly toward becoming a seminarian in the fall of 2013, right out of high school. Kelly, who will turn 22 on May 21, is finishing up his second year in the Basselin Scholars program at Theological College in Washington, D.C.

Much in the same way that the visiting clergyman aided in furthering his vocational journey, Kelly is now active in vocations-awareness efforts and said he has no qualms about approaching others to suggest that they consider the priesthood.

“In my parish there have been a couple of young men, and I’ve been sure to go up and tell them I think that (they have potential vocations),” he said.

Although priests and seminarians are natural candidates for promoting vocations, they’re not the only ones, asserted Fathers Matthew Jones and Peter Van Lieshout, diocesan co-directors of priesthood vocation awareness. Both priests urge parishioners who are acquainted with potential priests — revealed as such by their prayer lives, parish involvement and personalities — to convey that possibility to them.

“Cultivating vocations to the church, that’s a responsibility we all share,” Father Jones stated.

Father Van Lieshout added that if Catholics truly wish to see an increase in priestly vocations, all should be “willing to speak up and take a risk” when a budding vocation is apparent.

“We need to be a little more bold,” he said.

“People need to be asked the question; that will get them thinking about it,” agreed Kelly, noting that on the weekend he signaled his future vocation, at least one other young man at each Mass responded to the priest’s invitation by raising his hand.

Those who are asked to consider a vocation “might not think about it right away, but down the line, it might be ‘What did Father mean?’” Kelly said.

On the other hand, Fathers Jones and Van Lieshout acknowledged, approaching someone about considering a priestly vocation should only be done with careful thought since priesthood is a lifetime commitment.

“I’m asking something incredibly serious, I think. We don’t go up to somebody and say, ‘I think you should marry this person,’” Father Van Lieshout remarked.

Father Jones recommends knowing an individual well before starting a conversation about vocations.

“You wouldn’t do that to a complete stranger. You’d bring it up to someone you’ve seen at worship or who has been involved (in the church) in other ways,” he said.

He and Father Van Lieshout said their roles as vocations-awareness directors, ideally, are to further discussions that have already begun among potential priests and family members, friends and pastoral leaders in parishes and/or on college campuses.

“I think things need to be said at a much younger age,” Father Van Lieshout commented, saying that priestly life should be promoted in catechesis for children even as young as age 5. He added that he generally finds stronger candidates for the priesthood coming from families “who take their faith seriously” and, perhaps, encourage religious vocations within their households.

Another crucial voice in starting conversations about vocations is that of the parish priest. Father Jones said clergy should not only stress vocations from the pulpit, but also be present to young parishioners in other settings. For instance, as parochial vicar at Rochester’s Blessed Sacrament, St. Boniface and St. Mary parishes, Father Jones works closely with the young-adult population — “getting to know their faith, their Catholicity, and then following through with that,” he said. Meanwhile, Father Van Lieshout is regularly on hand for youth events at Blessed Trinity/St. Patrick parishes in Tioga County where he is parochial vicar, having accompanied a group of youngsters to the March for Life in Washington, D.C., earlier this year.

In Kelly’s opinion, modeling the priesthood by interacting with parishioners can pay major dividends in encouraging more men toward that vocation. Without a priestly presence, he said, “How can anybody think, ‘Oh, that’s what I want to do?’”

If, indeed, a young man wishes to explore the priesthood — whether or not he’s already been nudged in that direction — Kelly said it’s vital that he heed his inner voice.

Kelly said the next step should be talking to trusted individuals. He said such conversations happen best in supportive environments, noting that he got solid backing at home and at St. Mary Our Mother Parish in the early stages of his discernment, as well as from students and faculty at Horseheads High School.

“I never found that I was ridiculed for it. I think it was definitely more of a respect,” he said of people’s reactions to his discernment.
These days, Kelly said he provides similar support to discerners. In 2012, while still a high-school senior, he organized a Walk for Vocations in Elmira to enhance vocations awareness and raise funds for seminarians. He also helped launch a Holy Hour for Vocations in 2015 and repeated last year.

Two vocations-related events are coming up at Blessed Sacrament Church, Father Jones noted. A Holy Hour for Vocations, open to Catholic males and females of all ages, will take place Thursday, May 4, at 7 p.m. Males in high school through age 40, meanwhile, are invited to attend a Fisher Dinner set for Thursday, June 22, at 5 p.m.; those interested are asked to contact Father Jones at fjones@dor.org. The April 21 Bishop’s Dinner for Vocations at St. Patrick Church in Victor was another opportunity for young men to learn more about vocations while getting to know Bishop Salvatore R. Matano.

Observing that it can take years to discover one’s true vocation, Fathers Jones and Van Lieshout said such events do not impose any obligation or pressure on participants, so no one should hesitate to attend.

Still, Father Jones acknowledged he’d like nothing more than to see many discerners eventually become priests in an era when religious vocations are rarer.

“The world, our country, have lost the sense of true lifelong commitment, being of service to others. There are so many possibilities these days, so many choices. That’s why it’s hard to hear what God is saying,” Father Jones remarked. “What we need are solid, dedicated young men who want to give their life for prayer and service, not be worldly.”