Cupich: Pope has 'intuition about where people live their actual lives' - Catholic Courier 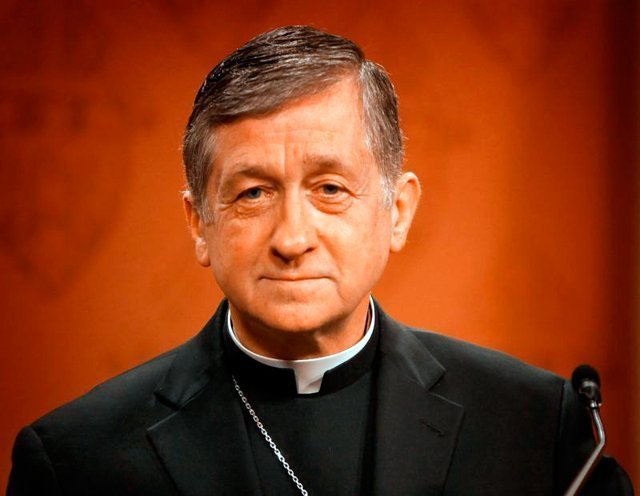 Archbishop Blase J. Cupich of Chicago listens to a question from a member of the media April 8 about Pope Francis' apostolic exhortation "Amoris Laetitia" ("The Joy of Love"), which delves into the church's teachings on true love and the family.

CHICAGO (CNS) — Archbishop Blase J. Cupich of Chicago welcomed the release of Pope Francis’ apostolic exhortation "Amoris Laetitia" ("The Joy of Love"), saying the document might be surprising to some for its insistence on the need for mercy and compassion and its emphasis on the role of conscience.

The document is the pope’s reflection on the 2014 and 2015 meetings of the Synod of Bishops on the family, which addressed all aspects of family life and included contentious discussions about under what circumstances divorced and remarried Catholics could receive Communion.

It does not offer any new rules or norms. Rather, Pope Francis urges careful reflection on ministry to families and, especially, greater consideration in the language and attitude used when working with those who do not fully live church teaching.

"I think that by and large, the average Catholic is going to find that what the pope is saying here is very arresting and new and creative and imaginative," Archbishop Cupich said at a news conference April 8, the day the document was released at the Vatican. "He is saying things they haven’t heard before with regard to the church. For instance, individuals in shaping their conscience take responsibility and nobody can come in and in some way try to replace that conscience.

"He talks about the need for families to be tolerant with each other in situations where people’s lives are not perfect so that we don’t separate ourselves and judge. ‘ This is not about a reform of rules. This is about a reform of church," the archbishop added.

Archbishop Cupich said that he intends to study the document with lay and ordained advisers, and the Chicago Archdiocese will look at the ways it ministers to families, perhaps by extending marriage preparation into the first year of marriage or finding new ways to support parents as they welcome children.

Whatever the church does must be done with mercy, he said.

The archbishop acknowledged that some might rather have a clear set of rules to follow, something Pope Francis addressed as well.

"He knows that this call for a more compassionate pastoral outreach of accompaniment, discernment and integration, one marked by tenderness, will leave some perplexed," the archbishop said, then quoted the document:

Archbishop Cupich rejected the idea that meeting people in the midst of the complexities of their lives means a "slippery slope" to a change in church teaching.

"It is not a slippery slope but a path forward for people who find themselves stuck," he said.

The document calls on pastors to help people who can’t find that way now, he said.

"A healthy dose of criticism is in order for us pastors, in the way that we treat people and the way that we present the church’s teaching," the archbishop told members of the media. "Too often, he says, we speak in a way that is far too abstract, presenting an almost artificial theological ideal of marriage far removed from the concrete situations and the practical possibilities of real families."

Archbishop Cupich said the document calls on the church and its pastors to walk with people as they discern the best way forward and to seek to integrate them into the church, and he added that Pope Francis reminds pastors that "we have been called … to form consciences, not to replace them."

Priests must help people understand the teaching of the church and the guidelines of the bishops when it comes to divorce and remarriage, he said.

"It can no longer be said, according to Pope Francis, that all those living in an ‘irregular situation’ are living in a state of mortal sin and are deprived of sanctifying grace," Archbishop Cupich said.

"’No one can be condemned forever, because that is not the logic of the Gospel!’ the pope insists," he said. "The goal of accompanying people is to help each person find ‘his or her proper way of participating in the ecclesial community and thus to experience being touched by an ‘unmerited, unconditional and gratuitous’ mercy.’ He is not speaking here only of ‘the divorced and remarried, but of everyone, in whatever situation they find themselves.’"

Asked in what specific situations he would allow a divorced and remarried person to receive Communion, Archbishop Cupich refused to rule anyone out.

"I wouldn’t exclude anyone," he said. "I would like our pastors to have discussion in all of those folks who are in these kinds of situations. ‘ I know in my experience as a pastor, if you’ve seen a marriage then you’ve seen one marriage. There is no instance that can be replicated. Every situation has its variables that are part of it."

The archbishop said he was impressed with the pope’s crisp, accessible writing style, and the way he draws on varied literary and cultural sources to connect with his audience.

"He’s got an intuition about where people live their actual lives," the archbishop said "He’s not living in a bubble."

Martin is a staff writer at the Catholic New World, newspaper of the Archdiocese of Chicago.