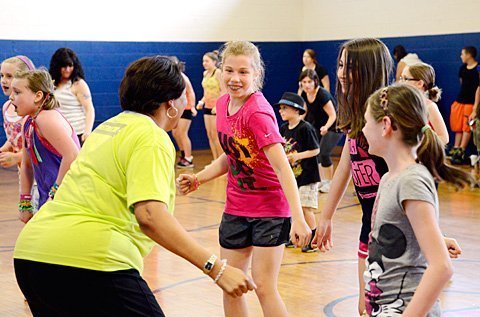 Ten-year-old Emily Tubbs (center) participates in a Zumbathon event at the former Good Shepherd School in Henrietta May 18.

HENRIETTA — Katie Tyner first learned about migrant workers in school during discussions about the 1940s in social-studies class.

"I didn’t know they were still around and around here," said the 10-year-old Leary Elementary School student. "I thought they were mostly in California."

Katie is a Girl Scout with Troop 60040. Once the girls discovered the plight of migrant workers in the Rochester area, Katie said that they decided to organize a Zumbathon. The event was held May 18 in the gymnasium at the former school on the campus of Good Shepherd Church, which is part of the St. Marianne Cope Parish.

Music blared from the gymnasium as Irene Sánchez kicked off the dancing with her son, Julio Jirel, and the other troop members as well as moms and a dad or two. One mom carried her son in an infant carrier as she followed Sanchez’s moves. Nine other Zumba instructors followed during the two hours of ZumbAtomic routines, which are designed for youths.

The troop members who weren’t dancing were sorting the donations of clothing, blankets and food, which served as admission for the event, said troop coleader Suzanne Bennett.

The 16 fifth-grade girls in the troop became familiar with Zumba and the plight of the migrant community through Sánchez, explained Bennett, who baby-sits Sanchez’s son,

Often, when picking up her son, Sánchez would recount a story of someone in need that she is trying to help through her work with the Migrant Education Program, which is based at SUNY Brockport. Bennett said.

"They all like Miss Irene and Zumba," added Bennett, whose family attends Guardian Angels Church.

Since the girls cannot raise money for a cause to earn their troop Bronze Award, Bennett and coleader J-Jay Donowski suggested a project where they could collect items to help the migrant workers, and that’s how ZumbAtomic was born.

"This (collection) helps out all the immigrants, coming to this different country from a whole different place, and they have no idea how to dress," said Samantha Donowski, 11. "It’s great to help them."

The 46 bags of items that were collected May 18 have been donated to the network of churches and organizations that help migrant workers in the northwest part of the region, Bennett said.

"This (experience) is teaching kids how to help the community," Sánchez said. "At the same time, they’re having fun and keeping healthy."

The girls also are following the part of the Girl Scout Law to make the world a better place, said J-Jay Donowski.

Sánchez said that the migrant community she works with will greatly appreciate the troop’s efforts.

"It’s nice for them to know there are people willing to help," she added. "Sometimes they feel depressed; that nobody cares."

To get the word out about ZumbAtomic, the troop sent out fliers and e-mails throughout the Girl Scout community as well as to people connected to Zumba, "a universe in itself," Bennett said.

The girls are already talking about hosting the event again, perhaps partnering with Julio Jirel’s Boy Scout troop, she added.

"This is something we can build on in the future," Bennett remarked.