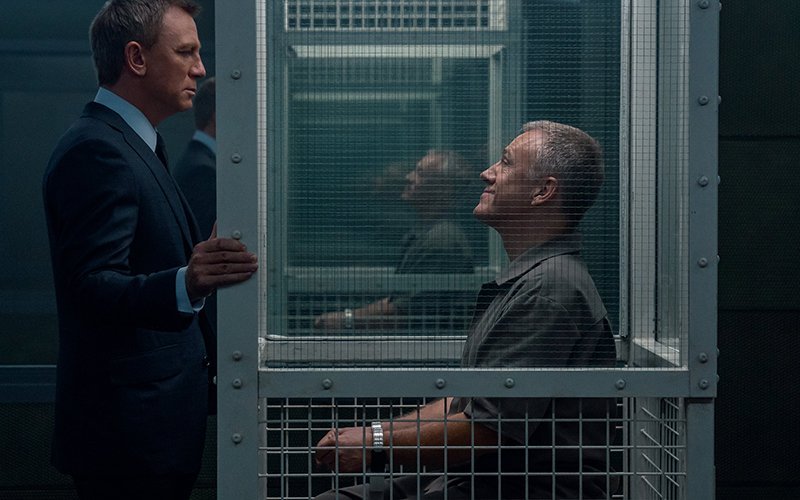 Daniel Craig and Christoph Waltz star in a scene from the movie "No Time To Die." (CNS photo by Nicola Dove/MGM)

Below this hectic adventure saga’s predictably glossy surface, however, lurk plot developments requiring careful discernment on the part of those viewers inclined to probe its underlying values.

As far as his personal life is concerned, Agent 007 seems to have found a soulmate in psychologist Madeleine Swann (Lea Seydoux). But romantic complications that may or may not be due to behind-the-scenes trickery leave him wondering whether he can ever really trust her.

Professionally, Bond longs to retire. But, as gangster Michael Corleone in the “Godfather” franchise once famously complained about his own supposed plight, he keeps getting pulled back in — specifically here by a plot to unleash a highly refined biological weapon on the world. So he’s soon in conflict with veteran adversary Ernst Blofeld (Christoph Waltz) as well as newcomer Lyutsifer Safin (Rami Malek).

Bond’s mission is made more complicated by the fact that a rift has opened up between the British and American intelligence authorities, primarily due to a dark secret his longtime boss M (Ralph Fiennes) is harboring. He also finds himself in competition with Nomi (Lashana Lynch), a much younger MI6 operative intent on taking charge.

Fortunately, though, Bond can ultimately rely on aid from M’s secretary, Moneypenny (Naomie Harris), and from gadget-meister Q (Ben Whishaw). For no particular reason, the latter is now gay, but the treatment of this subject is restricted to his interrupted preparations for a same-sex dinner date.

Long notorious for his promiscuous heterosexual bed-hopping, Bond has evolved sufficiently to yearn for a stable home life with Madeleine. Yet, while he may be progressing morally on that front, Neal Purvis, Robert Wade and Phoebe Waller-Bridge’s script muddies the ethical waters by having Bond exact revenge on a couple of his enemies in a way that can’t be squared with scriptural values.

Equally troubling is the dramatically powerful but morally problematic conclusion of director Cary Joji Fukunaga’s world-traversing adventure. While a detailed analysis would necessitate an unforgivable spoiler, suffice it to say that Bond makes a choice that aligns with a purely romantic worldview but not with a Christian outlook.

For those content to consume popcorn and skim along the surface of this long, sprawling, action-packed and unapologetically escapist fantasy, however, such ponderous issues will remain as remote as that interminable question: Why shaken, not stirred?

The film contains mature themes, including vengeance, suicide and an out-of-wedlock birth, much stylized violence, brief gory images, premarital cohabitation and sensuality, partial nudity, vague references to homosexuality, a few profanities, a handful of milder oaths and at least one instance each of rough and crude language. The Catholic News Service classification is A-III — adults. The Motion Picture Association rating is PG-13 — parents strongly cautioned. Some material may be inappropriate for children under 13.