Daniel tells a king the meaning of his dream - Catholic Courier 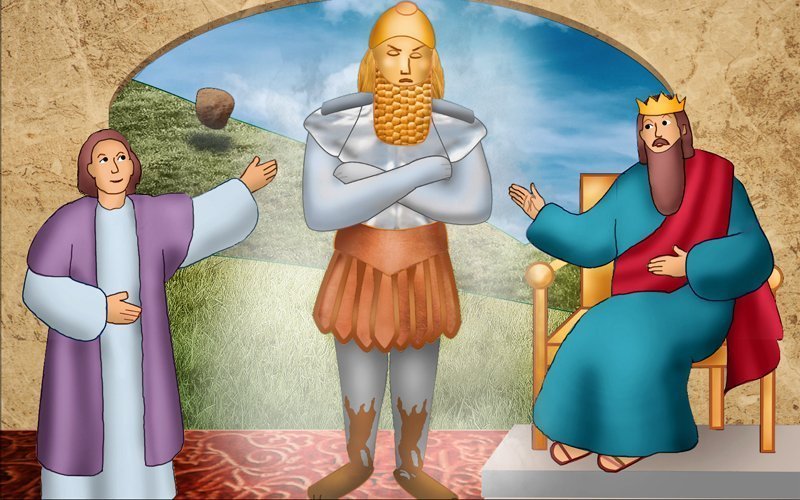 Daniel tells a king the meaning of his dream

Daniel tells a king the meaning of his dream

One day, King Nebuchadnezzar of Babylon wanted his dream interpreted.

He summoned all of the city’s enchanters, sorcerers, magicians and Chaldeans. Nebuchadnezzar expected these men to know what his dream was without being told and then interpret it correctly.

The king became angry when the men said they could not do so, and he ordered all of Babylon’s wise men to be put to death.

Daniel, an Israelite who had been taken to Babylon to serve Nebuchadnezzar after the king’s siege of Jerusalem, heard what was going on.

God had blessed Daniel with knowledge, wisdom and the understanding of visions and dreams. So Daniel asked for time from the king so he could interpret the dream.

During the night, God gave Daniel a vision in which the king’s dream and its meaning were revealed.

Daniel praised God and asked to see the king.

“There is a God in heaven who reveals mysteries, and he has shown King Nebuchadnezzar what is to happen in the last days,” he said.

He described the king’s dream, which was about a very large and bright statue. The statue’s head was made of gold; its chest and arms were made of silver; its belly was made of bronze; its legs were made of iron; and its feet were part iron and part tile.

“While you looked at the statue, a stone which was hewn from a mountain without a hand being put to it, struck its iron and tile feet, breaking them in pieces. The iron, tile, bronze, silver and gold all crumbled at once. … But the stone that struck the statue became a great mountain and filled the whole earth,” Daniel told the king.

The king was so pleased that he made Daniel ruler of the whole province of Babylon and chief prefect over all the wise men.

1. Who wanted his dream interpreted?

2. Who revealed the dream’s meaning to Daniel?

TRIVIA: What food did Daniel and his friends eat when they were being trained for the king’s service? (Hint: Daniel 1:12)

In Genesis 41, we read another story of how God helped a man successfully interpret dreams.

Joseph’s jealous brothers had sold him into slavery in Egypt, where Joseph was imprisoned for a crime he didn’t commit. During that time, God gave Joseph the correct interpretations of the dreams of two fellow prisoners, Pharaoh’s chief cupbearer and chief baker.

Pharaoh summoned Egypt’s magicians and sages, who could not interpret the dreams.

Pharaoh’s chief cupbearer, who was back in the king’s service, remembered Joseph and told Pharaoh about him.

Joseph said that God was telling Pharaoh what was to come and suggested that a wise man be put in charge of collecting and storing food during the years of abundance so the Egyptians would survive the coming famine.

“Since God has made all this known to you, there is no one as discerning and wise as you are,” Pharaoh said as he put Joseph in charge of all of Egypt.

St. Francis Xavier was born in 1506 in present-day Spain. He was among the first seven Jesuits, who were ordained to the priesthood as a group in 1537.

From 1541 until he died shortly after arriving on the Chinese coast in 1552, Francis was a missionary who evangelized in such countries as India, Malaysia, Japan, Sri Lanka and Mozambique. We remember him on Dec. 3.

Using the hints provided, answer the following questions about Daniel and Joseph.

1. What was Daniel’s name changed to when he was taken to Babylon? (Daniel 1:7)